Alexis Trombley signs on to play volleyball, softball for Lumberjacks 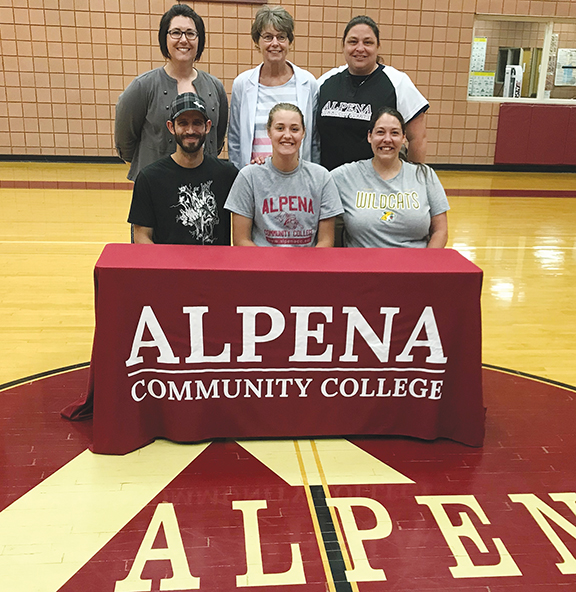 Alpena Community College welcomed a new student-athlete on Wednesday as Alexis Trombley signed her National Letter of Intent to continue her athletic career for the Lumberjacks.

Trombley signed on to become a member of the ACC volleyball team and also committed to play softball for the Lumberjacks during the 2019-2020 school year.

“I’ve really loved playing both volleyball and softball since I was young so getting to continue on with playing sports along with continuing my education is exciting for me,” Trombley said. “I’ve met a lot of the girls from both teams and it’s a really nice atmosphere here at ACC and I’m really excited to be here.”

Trombley attended Rapid River High School in Michigan’s Upper Peninsula and was a standout on the volleyball court and the softball diamond.

Trombley was a leader on the court and on the field and earned many individual honors during her time at Rapid River, including being an all-state selection at first base during her junior year.

Despite her exceptional three years at Rapid River, Trombley transferred to Marquette for her senior season. The transition wasn’t easy and Trombley had to adjust to her new roles at the outset.

“I transferred to Marquette a week before school started and I didn’t get the starting position that I wanted right away. I came from being team captain, so it was kind of a hard move for me, but in the end I earned a starting spot on the volleyball court,” Trombley said. “Softball was a different transition to after being all-state at first base my junior year at Rapid River, I played different positions all over the infield and earned all-conference and all-district honors as a utility player.”

Trombley eventually worked her way into the starting lineup as an outside hitter during her senior year and it was at the district tournament where the Redettes traveled to Traverse City where ACC head volleyball coach Sarah Stafford-Parsons got a glimpse of Trombley’s talents and the recruiting process began.

The process is now complete as she will sport the Maroon and White for the Lumberjacks in the fall.

“I talked to coach Sarah (Stafford-Parsons) and she told me she liked what she saw from me on the court during my senior year of districts and she explained to me what Alpena has to offer and I really liked what she had said and the things that I could do here,” Trombley said.

After speaking with Stafford-Parsons about volleyball, Trombley was then able to talk to ACC head softball coach Christin Sobeck about the possibility of playing two sports while at ACC.

“I had a meeting with Christin (Sobeck) and she gave me some good insight and we talked about possibly doing dual sports if that was in the cards for me,” Trombley said.

Trombley will provide the Lumberjack softball team with some much-needed flexibility as she is able to play multiple positions in the infield and has the experience of pitching if needed.

On the volleyball court, Trombley will likely remain an outside hitter thanks to her length and could make an impact right away.

Along with her raw skills, it is Trombley’s leadership abilities that may be her most important and valued trait that will make her valuable for both ACC programs.

“I just want to do the best that I can and show everyone how good of a leader I can be. I have experience being a captain and I’m not expecting to get that same position, but I just see myself as a very good leader and I’m hoping to continue those leadership skills here at ACC,” Trombley said. “I want to thank my entire family, my mom, my dad and all of my siblings because I have a lot of them. They may not know it, but they always push me to do things that I’m uncomfortable with, but I do it for them so that they can look up to me and I can set a good example for them. I would not be where I am without all of the love and support from my entire family.”