Shining bright on the diamond 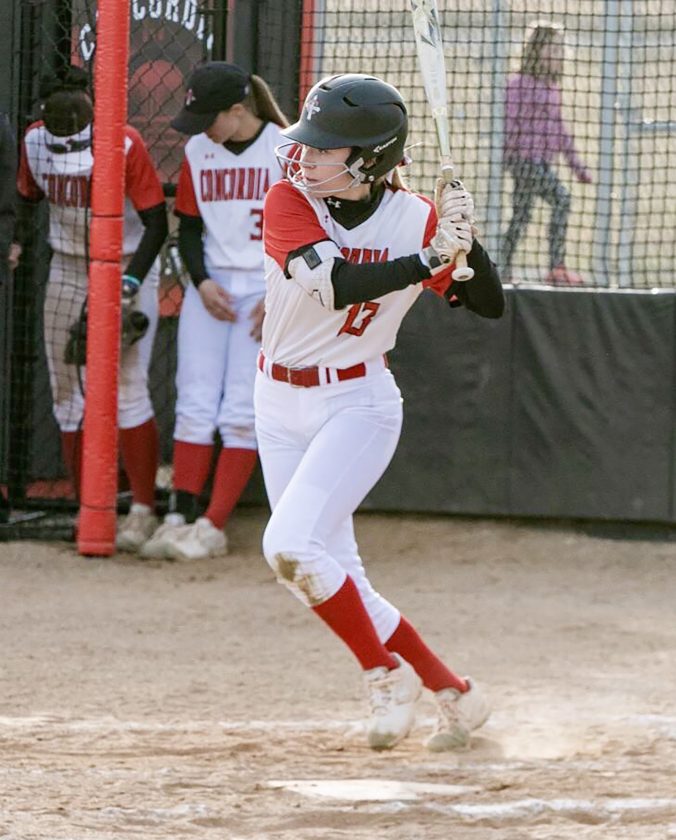 Concordia University freshman Lyndsey Ryba swings at a pitch during a collegiate softball game this past spring. Ryba recently completed a stellar first season with the Cardinals and earned second team all-conference honors for her efforts during the 2019 season.

Playing a collegiate sport as a freshman has its challenges and can be intimidating.

The time commitment it takes to earn playing time may seem a bit overwhelming at times from the hours put in at practice, to the weight room, to games and balancing academics.

Lyndsey Ryba is used to challenges and commitment. Her work ethic and skill helped her overcome that early intimidation and led to a successful freshman season on the softball field for Concordia University.

“Coming in as a freshman, I knew that there are older girls on the team with more experience, but I let this motivate me rather than intimidate me. I know what I am capable of and I knew that I had to put 110% effort into everything if I wanted to see playing time,” Ryba said. “Thankfully, my hard work paid off as I received a lot of playing time throughout the season and it has allowed me to have success on the field.”

Successful would be an understatement when describing Ryba’s first year of collegiate softball. Ryba was a fixture in Concordia’s lineup and put up some stellar numbers.

Ryba’s .351 batting average was also tops on the team among players who had over 100 at-bats.

“Honestly, I never aimed to be among the top of several offensive categories, it just kind of happened. When I am waiting on deck to hit, I always think about what I am going to do to get on base or advance the runner if someone is one base in front of me,” Ryba said. “Being a slapper allows me to have all kind of options as to what I want to do. My main concern is just getting my job done at the plate and when I get on base my mind set is to be a smart and aggressive baserunner.”

Ryba’s slap hitting abilities from the left side of the plate and blazing speed on the basepaths made her a tough out every time she stepped into the box.

Ryba uses the same mentality and styles she used during her high school career at Marquette High School, before transferring to Hillman, where she played for the Tigers for two seasons and later graduated from.

“I think the main difference and challenge from transitioning from high school to the collegiate level is that everyone is good at the college level and (all) the players are there for a reason,” Ryba said. “In college, people are specifically recruited to be a part of a program so you know that they are capable of playing, where this isn’t necessarily the case in high school. Knowing this, I made sure that I didn’t let this challenge intimidate me.”

Ryba spent her time defensively in the outfield, patrolling center field where she could display her speed, range and showcase her arm when needed.

Ryba was just as sound in the field as she was offensively. She committed just four errors in 107 chances. Ryba’s .963 fielding percentage was among the best on the team for as many players who started and playing in as many games as she did.

“I absolutely love the outfield. I think it is so much fun chasing down balls and trying to throw people out. No matter where I am in the outfield, I’m just happy I have the opportunity to play out there,” Ryba said. “When the ball is hit to me, I always think I’m going to catch it until I absolutely can’t. I think having this mindset as an outfielder has allowed me to play sound defense.”

Ryba helped lead Concordia to a 29-22 overall record and 11-11 record in Wolverine-Hoosier Athletic Conference (WHAC) in NAIA play. The Cardinals game up just short in the NCCAA World Series semifinal round.

Despite coming up short as a team, Ryba is focused on her next three years of collegiate softball and is determined to build on of her stellar freshman season after which she received second team all-conference honors.

“I am always trying to better myself. I never really see what good I do. I could have a great game or even a good season and all I will remember are the areas of improvement that I need to work on in the offseason and in the following years,” Ryba said. “After experiencing what college softball is all about and how I perform at this level, I know what to build off of for the seasons to come.”

Whitmer backs police changes after deaths of Floyd, others nationwide