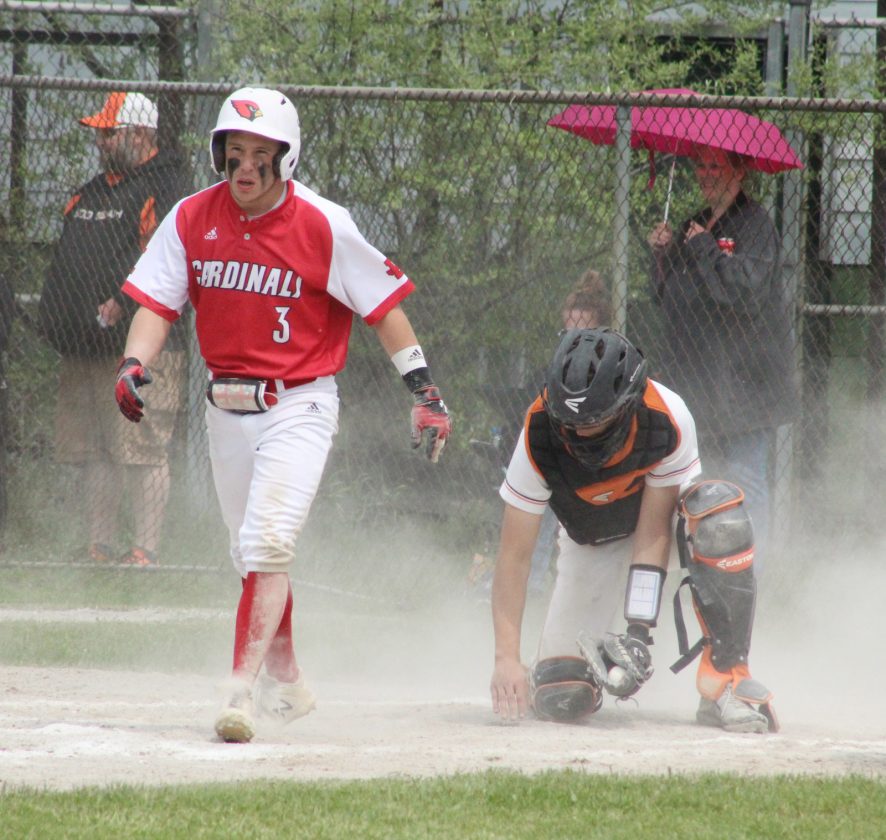 News Photo by Jonny Zawacki Johannesburg-Lewiston’s Kevin Gehringer (3) scores in the bottom of the sixth inning in a district championship game against Hillman on Saturday at Atlanta High School. The Cardinals knocked off Rogers City and Hillman en route to a district title.

ATLANTA — Two teams’ postseason woes continued on Saturday as the Hillman and Rogers City baseball teams were both on the receiving end of a loss to Johannesburg-Lewiston during Division 4 district play in Atlanta as Joburg shut out Rogers City 8-0 in the first game of the day and held onto defeat Hillman 6-4 in the district championship game.

Hillman experienced nearly the same misfortune that cost them a district championship two years ago.

The Tigers trailed 5-3 in the top of the fifth inning and had runners on second and third with nobody out.

Nic Taratuta stepped to the plate and Hillman attempted a suicide squeeze, but Taratuta popped the bunt up to pitcher Sheldon Huff who made the catch and threw over to third base to double the Tigers up.

Huff got the next batter to ground out to end Hillman’s threat and hold onto a two run lead.

Joburg added an insurance run in the six and put more pressure on the Tigers who could only send one runner across the plate in seventh and came up just short in a district title game.

Huff started the game for Joburg and pitched the first five innings, Tanner Shimel entered and tossed an inning and a third to hold the Tigers in check before Huff game back on to record the final outs to finish what he started.

The Cardinals opened with two runs in the first and three more in the second, but Hillman did all it could to chip away, but in the end the Tigers couldn’t muster enough offense.

Kory Henigan was the tough luck loser as he pitched all six innings for the Tigers, but was the victim of a few shaky defensive plays behind him which led to runs for Joburg.

The Cardinals were aggressive on the basepaths and stole a pair of runs with heads up baserunning and put pressure on Hillman’s defense throughout the contest.

Henigan did all he could to help his own cause going 3-for-4 with a run scored and an RBI at the plate. Taratuta and Isaac Morrison each added a hit apiece and scored a run in the losing effort.

The Hurons had no answer for a pair of Joburg bats in the opening district semifinal game.

The Cardinals duo of Huff and Runyan each had three hits, including a pair of doubles and a home run as they combined to score four runs and drive in four runs.

Huff got Joburg on the board early when he sent a two-out solo home run deep over the right field fence in the top of the first inning.

Runyan followed the home run with a double to the fence and came around to score to give Joburg a 2-0 lead early.

The two runs were more than enough for Shimel who pitched all seven innings and held the Hurons to just four hits.

Shimel worked his way out of danger in the third inning as Rogers City trailed 3-0 and had the bases loaded with one out.

Shimel got the next two Hurons to pop out in the infield and it was the best chance Rogers City had to score.

Joburg carries the momentum of getting out of the jam as they scored five runs in the fourth to blow the game open and take an 8-0 lead and one they went on to win by and advance to the district championship game.

Cam Streich led Rogers City going 2-for-3 and Michael Karsten and Kaleb Budnik split the pitching duties as Karsten started the game and was hit with the loss after pitching 3 1/3 innings.

Hillman cruised past Atlanta in the second game of the day to advance to a district finals matchup with Joburg as the Tigers trounced the Huskies 13-0 in five innings.

The Tigers pounced on Atlanta early, scoring three runs in the first inning and five more in the second to take an eight run lead early.

Hillman collected 16 hits in the win and provided more than enough offense for Taratuta who started on the mound and pitched four innings earning the win.

Taratuta struck out eight batters and didn’t allow a hit in four innings of work.

Henigan led the offense with a pair of hits including a home run, three RBI and two runs scored. Gage Steinke had three hits, scored three times and drove in three runs. Nash Steinke also had three hits and scored a pair of runs and Taratuta went 3-for-3 with a run scored and an RBI.