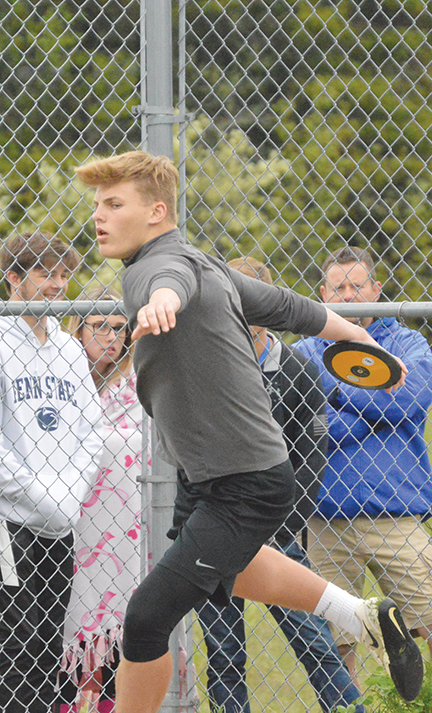 In a season filled with big moments, Eli Winter is hoping to save his biggest one for the state’s biggest stage.

Winter will compete in the discus and shot put at the Division 1 track and field state finals at East Kentwood High School on Saturday, looking for the cherry on top to arguably one of the best seasons by an Alpena High thrower in recent memory.

To say Winter’s season has been impressive is an understatement. From the moment he set a new school record in Alpena’s season opener, the junior has steadily picked up momentum with every meet.

“(It’s been) pretty amazing I’d say. Going into it, I wasn’t really expecting I have right now,” Winter said of his season. “It’s been great, better than expected.”

Winter hit the ground running in Alpena’s first meet in Davison, setting a new school record in the discus with a throw of 170 feet, breaking the previous mark of 161-8 set by Andy Gheen in 1977.

Breaking a school record is a remarkable feat, but Winter wasn’t done there. Less than two weeks later, he broke the record again with a throw of 173 feet. Almost two weeks later, Winter bettered his own mark again, throwing the discus 175 feet, 10 inches in West Branch.

Winter’s quest for a breakout season began in the weight room this past winter and continued into indoor track season, where coaches noticed his hard work paying off.

“Eli’s hard work started this winter in indoor track really. You saw him getting ready in March when we started throwing the disc a little bit inside and he’s just progressed phenomenally,” Alpena assistant throws coach Trevor Roznowski said. “He’s taken everything we’ve given him as coaches and he’s ran with it.”

Going after the school discus record was a goal for Winter entering the season, but he said he’s still got room to improve.

“That was a goal going into the season and I’m still a junior, so that just means I’ve got (even further) to go senior year and really shatter it,” Winter said. “(Setting the record early) gave me a good mark to start the season with.”

In the midst of setting records, Winter has been tough to beat in big moments. He won a Big North Conference title in the discus, finished second in the same event at regionals–behind fellow Big North thrower Demetrius Miller from Gaylord– and set new meet records in the shot put and discus at the Alpena News Honor Roll Invitational earlier this week.

Winter’s PR of 175-10 is currently the fourth best in Michigan this season and if things go well on Saturday, he hopes to break his own record for a third time.

“I’m going in seeded second, so I’d like to hopefully PR and pop the 180 mark,” Winter said. “That’d be nice. That would really be something.”

Winter is one of three Alpena throwers who will make a state finals appearance this weekend. Junior Arthur Paad will join Winter in the discus and Faith Weide will make a third straight appearance in the shot put after finishing seventh last season.

“Having two athletes for the boys, one athlete for the girls going to the state finals is just a phenomenal accomplishment overall,” Roznowski said. “I think that all of them have a great work ethic and that speaks volumes to all of our throwers this year.”

Like Winter, Paad spent time lifting in the weight room, competing in indoor track and improving. With the exception of his season PR (146-2) at regionals, Paad’s distances in the discus improved at every meet he competed in.

“At the beginning, I was really rusty, but throughout the season I got better and better. I qualified for the state meet. It means a lot because all that hard work that I’ve put into track just makes up for it,” Paad said. “I’m just trying not to be nervous, to get some big throws out there and to just stay focused.”

Roznowski competed in the finals in 2017 and knows that competing at the state meet among the best athletes in Michigan can daunting. But, speaking from experience, he’s advised Alpena’s throwers to stay focused and make the most of their chance.

“The biggest thing I will tell them as we head into the state meet is that they just need to focus on what they can do and not those around them,” Roznowski said. “It is a big stage, but they have done so much hard work and so much preparation to get there and it’s time to capitalize on that moment and do their very best.”