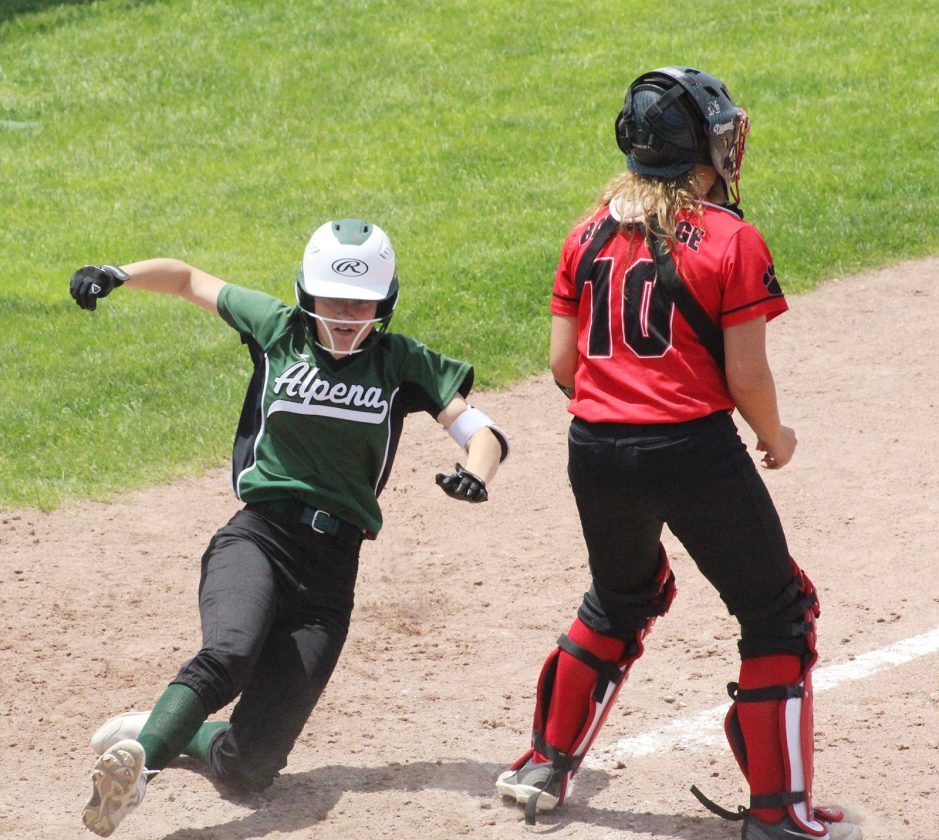 News Photo by Jonny Zawacki Alpena’s Riley Alexander slides across home for the game-winning run in the seventh inning of a Division 1 regional semifinal game against Grand Blanc on Saturday at Saginaw Valley State University.

The Wildcats rallied back to defeat Grand Blanc in the regional semifinal game 3-2, but got shut out in the title game as Bay City Western defeated the Wildcats 6-0 at Saginaw Valley State University.

“We faced two of the best pitchers in the region today and we knew that and prepared for it coming in. We battled all day and came up big late in the first game and we put the ball in play in game two, but Bay City played tremendous defense and unfortunately came up a little short today,” Alpena coach Paul Marwede said. “For 14 innings today we played against two of the best pitchers in the state. I’m proud of the girls for how hard they battled, the goals we did achieve this year and the season we had.”

The Wildcats were down to their final three outs in the regional semifinal game against Grand Blanc and it looked as if Alpena were going to make an early exit in the regional tournament.

Much like the first matchup between the two teams earlier in the season, Grand Blanc’s Kendall Klochak shut down the Wildcats through six innings and the Bobcats took a 2-0 lead in the top of the fifth inning when they scored a pair of runs.

Klochak held Alpena to just two hits through the first six innings, but the Wildcats found a way to rally late.

Jade Schultz got Alpena going in the home half of the seventh when she tripled to deep right field to lead off the frame and the next three Wildcats reached base.

Allie Funk singled home Schultz and Riley Alexander reached base on an error, sending pinch runner Allie DeRocher to third base to represent the tying run.

One batter later, Sydney Chojnacki sent a flare down the right field line that landed fair and found its way past Bobcats right fielder Brie Broderick. DeRocher came across to score the tying run and Alexander motored her way around the bases to score the game-winning run as Alpena walked off with a dramatic game one victory to advance to the championship game.

“I just told the girls each inning to keep battling. Jade starting off the bottom of the seventh with a triple really lit a spark for us and we were able to build off of that and eventually win the game,” Marwede said.

After a thrilling finish to get to their second straight regional championship game, the Wildcats were faced with another rematch against Bay City Western in a rematch of last year’s regional title game.

Last year, Alpena defeated the Warriors 5-4 in a nine-inning thriller, but this time around, Bay City had revenge on its mind.

The Warriors opened the scoring with a run in the second inning and blew the game wide open in the home half of the third when they nearly batted around the order to score five runs and take a commanding 6-0 lead.

That cushion was more that enough for Adaline Ziehmer who shut down the Wildcats, limiting them to just four hits after she tossed a no-hitter in the semifinal game.

“The third inning hurt us and it’s a much different game and we can do a lot more if we’re trailing by just a run or two, but when you’re trailing by six you have to just hope you can string a few hits together and get a big hit somewhere,” Marwede said. “Hats off to Bay City Western, they have a very nice team and two of the better teams from northern Michigan met up in the regional final and congratulations to them. We’ll work hard and our goal is to be back here again next year with hopefully a better outcome.”

Two of Alpena’s four hits in the championship game came off the bat of leadoff hitter Abbie Funk who went 2-for-2 with a double, single and a walk. Alexander and Emma Fraser added a hit apiece in the loss.

Fraser earned the win in the circle in game one, but was chased from the championship game after just two innings and was relieved by Schultz who finished the game.

Alpena will bid farewell to six seniors who were key to its success this season, but the Wildcats will return a plethora of experienced players for next year.

“This was a great group of kids who worked hard. We’re a little disappointed that we didn’t get it done today, but if you lose in the regional final it means you’re among the best teams in the state,” Marwede said. “We’re proud of the fact that we’re in that conversation and proud we were here and we represent and played well. I’m very proud of the girls.”