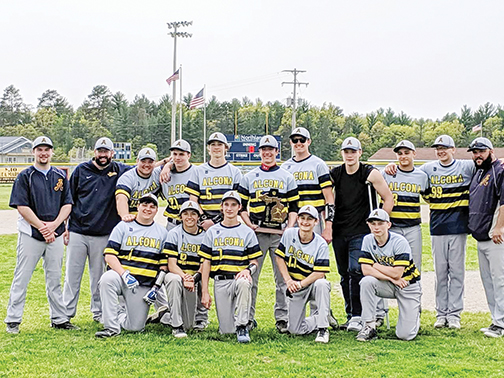 Courtesy Photo The Alcona baseball team poses after winning a Division 4 district title over Au Gres on Friday in Mio.

MIO–Early offense carried the Alcona baseball team back to a district championship.

The Tigers scored eight runs in the third inning of Friday’s Division 4 district final and went on to defeat Au Gres 13-3 to win their first district since 2017.

Both teams scored a run in the first inning, but Alcona took control of the game for good in the third inning.

Alcona totaled 14 hits in the game. Stephenson, Jon Surgener, Sytek and Mikazes all had multiple hits for Alcona.

“It feels really good to bring home the district. A couple weeks ago we got back to fundamental baseball and we have been playing really well since,” Alcona coach Nathan Walker said. “These boys have put in a ton of work this year and it’s paying off. They were very disciplined at the plate today and as a coach I love that. I can’t say enough about this group, we keep getting better everyday. We aren’t done yet.”

Josh Kilbourn was credited with the victory for Alcona. He surrendered three runs on two hits over 4 2/3 innings, striking out seven and walking one.

Sytek added a run for Alcona with an RBI single in the fifth inning and Au Gres added a run in the bottom of the fifth.

Alcona gained a measure of revenge in the district semifinal, defeating Mio 5-4.

With Friday’s game tied 3-3 in the top of the fifth, White lined out to drive in the winning run.

Mio scored three runs in the fourth inning and both teams also scored a run in the seventh.

Surgener earned the victory for Alcona. He allowed six hits and four runs over seven innings, striking out ten and walking one.