Posen battles back in doubleheader sweep of Au Gres 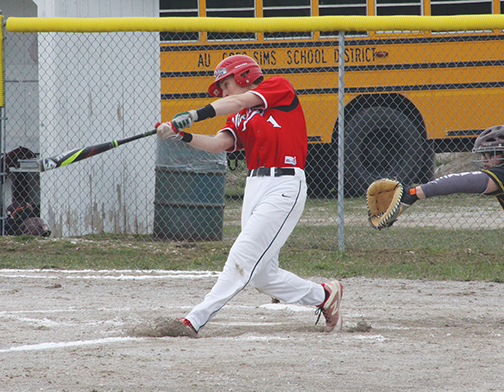 News Photo by Jonny Zawacki Posen’s Jared Sharpe hits a ball up the middle for a single in the first inning of game one of a North Star League doubleheader against Au Gres on Monday. The Vikings earned a pair of comeback victories at home against the Wolverines.

POSEN — A wild and exciting night of baseball ended with two victories for the Posen baseball team as the Vikings swept Au Gres at home in a North Star League doubleheader on Monday, defeating the Wolverines 14-10 and 7-6.

In game one, the Vikings battled back from an early deficit to take a lead in the middle innings and held on to win after a wild ending.

Au Gres batted around the order and scored four runs in the top of the first inning to take an early lead, but Posen responded right away and began chipping away at the lead as the Vikings scored three runs of their own in the home half of the first to cut the lead to one.

The Wolverines added a run in the second and another in the third to take a 6-3 after two and a half innings.

Posen got to work in the bottom of the third as the first three batters of the inning singled and later scored as the Vikings finished with five runs in the inning to take an 8-6 lead.

Posen didn’t hold the lead for long as the Wolverines scored a pair of runs on a two run home run to tie the game at eight.

The Vikings responded with five more runs in the fourth to break the game open. Posen cashed in on the Wolverines’ mistakes as Au Gres committed three errors in the inning. The biggest blow of the inning came with two outs when Lucas Stone capped off the scoring in inning number four with a solo home run over the left field fence to put Posen on top 13-8.

The two teams each scored a pair of runs in the fifth and the Vikings led 14-9 headed to the top of the sixth.

Stone who came on in relief and pitched 1 1/3 innings, started the sixth, but ran into some trouble after recording one out and allowing a run.

Posen coach Pat Kowalski went back to his starter, George Kroll to get the final two outs with his team up 14-10 with runners on first and second with one out.

Kroll did exactly that, but not in the way Kowalski or anyone else may have thought. Kroll came in and got the final two outs without throwing a pitch.

Kroll picked a Wolverine runner off second base as shortstop Chase Dubie received the pickoff throw from Kroll and fired the ball over to third baseman Lyrical Mercier, who applied the tag on the runner advancing for the second out.

Mercier then realized the runner from first stopped between first and second base assuming the third out had been made and Mercier threw back towards second base and a tag was applied to the runner and the game ended in bizarre fashion.

Kroll picked up the win on the mound, pitching 4 2/3 innings total on the night and striking out four batters.

Posen once again found themselves trailing in the nightcap, but again found a way to comeback and complete the doubleheader sweep.

The Vikings trailed 5-3 after three innings and Sharpe came on in relief to get the final two outs of the fourth inning.

Sharpe limited the Wolverines to one run the rest of the way and the Posen offense did the rest as they scored four runs over the final three innings to come away with another thrilling victory as Sharpe picked up his first win of the season.

Posen improves to 6-4 overall on the year and is 6-2 in NSL play. The Vikings will return to the diamond on Thursday when they travel to Hale.