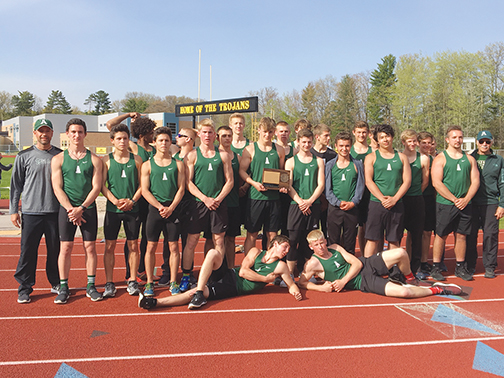 The Wildcats finished with a team score of 215, well ahead of Traverse City West who took second with 135 points and Traverse City Central who ended with 119.25 points.

A total of 10 Wildcats finished as conference champs in 17 events.

Alpena won the 3,200 relay for the third year in a row and Josh Smith and Aden Smith repeated as champions in the 800 run and 1,600 run respectively.

The Alpena girls were led by Maddy Boyd and Faith Weide as they both earned conference championships.

ONAWAY–The Onaway softball team took care of business ahead of a tough test on Friday, topping Kalkaska 6-1 and 12-5 on Wednesday.

In Wednesday’s opener, Calley Selke earned the win, allowing four hits, an unearned run and one walk with eight strikeouts.

Between the two wins, Onaway broke a program record for home runs in a season, which was previously set by the 2010 team.

Crawford was the winner in the nightcap, allowing no earned runs, five hits, walking none and fanning 10.

HILLMAN — The Hillman softball team split a doubleheader at home on Wednesday with Roscommon.

Hillman scored six runs in the first two innings and never looked back as it cruised to a lopsided victory.

Makenna Grulke led Hillman with four hits and Bailey Schook added a pair of hits in game one.

Mckenna Hively earned the win in the circle pitching a complete six innings.

Both teams came out swinging in the nightcap as the two teams combined to score 16 runs in the first two innings as both teams were tied, but Roscommon broke the game open with five more runs in the top of the third inning and held on for the win.

At the plate, Hillman was led by Schook who had three hits and Brooke Jones added a pair of hits and stole three bases.

LINCOLN — The Alcona softball team was on the wrong end of a doubleheader sweep on Wednesday against Au Gres.

Alcona dropped game one after the Wolverines put together a three run third inning to take a 4-1 lead and added the final run of the game in the fourth and hung onto to win.

Au Gres made quick work of the Tigers in the nightcap as collected 14 hits and exploded for a 10 run second inning and added seven more in the third and needed just three innings to earn the victory.

The Vikings got a lot of production from the top of their lineup in an 8-2 game one win, but Posen was on the receiving end of an 18-2 shellacking in the nightcap.

Lucas Stone, Jared Sharpe and Mark Wisniewski provided plenty of offense for Posen in game one as the trio combined to go 6-for-8 at the plate and scored seven runs.

George Kroll pitched all six innings and earned the win on the mound for Posen, allowing just four hits, one earned run and striking out a pair.

The Owls came out firing in game two and piled up 18 runs on 14 hits.

Much like Posen’s top of the order was key in game one, Oscoda’s first four batters came through in the nightcap. Gabe Kellstrom, Brayden Mallak, Owen Franklin and Jacob Condor combined to score 13 of the 18 runs.

The Wildcats defeated Hillman 20-5 in game one and 8-4 in game two.

Hillman couldn’t get much going offensively and Owen Moulton led the way going 1-for-2 with an RBI.

In the nightcap, Hillman was paced by Nash Steinke who went 2-for-3 with a double, a run scored and an RBI. Brady Firman went 3-for-4 with an RBI, Aden Sobeck had a double, an RBI and a run scored. Sean Henigan walked twice and scored a run, Zak Kazyaka had a hit and a pair of walks and Adam Ruthko had two walks.

The Alpena JV baseball team split a doubleheader with Petoskey on Tuesday.

Both teams entered 8-0 in the conference and the Wildcats took game one 7-1 and dropped a heartbreaker, 11-10 in the nightcap.

Keegan Hahn pitched six innings in game one to earn the win as he allowed just two hits and struck out seven. Travis Weide pitched the final inning in relief.

Victor Chen paced the Alpena offense going 3-for-5 with a triple. Weide went 2-for-2 with a pair of doubles and Hahn finished 2-for-4.

Overall the Alpena JV team finishes the year with an impressive 23-2 overall record and was 9-1 in BNC play.