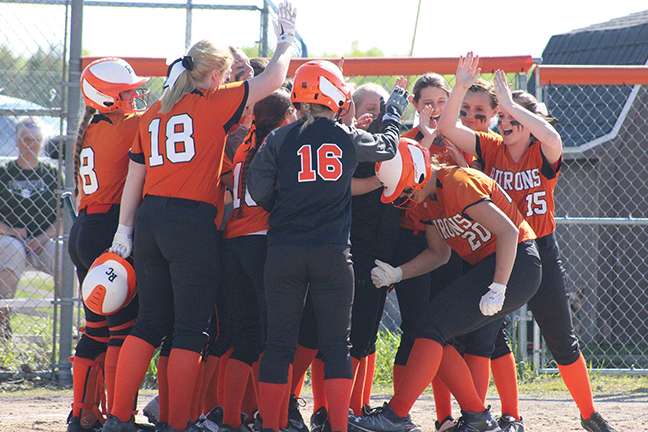 ROGERS CITY — Over the past several years it has been a luxury for the Alpena High and Rogers City softball teams to play their final games of the regular season as a tune-up before postseason play begins.

For more than a decade, both the Wildcats and Hurons have enjoyed their share of success and are the top two softball programs around the area.

On Wednesday, the two teams split a doubleheader as the Hurons topped Alpena 3-1 in game one and the Wildcats bounced back to win the nightcap 11-3 in Rogers City.

“The first game tonight was just like a tournament game and that’s why we play these games against Alpena. I was happy with how we played and I have a ton of respect for coach (Paul) Marwede because Alpena has a great team, they are a great program and it’s just fun getting together to play this before tournaments,” Rogers City coach Karl Grambau said. “When we play competition like we did today, we’re getting better ourselves and I think both teams are helping each other before district play begins.”

A well-played game one went to the Hurons. 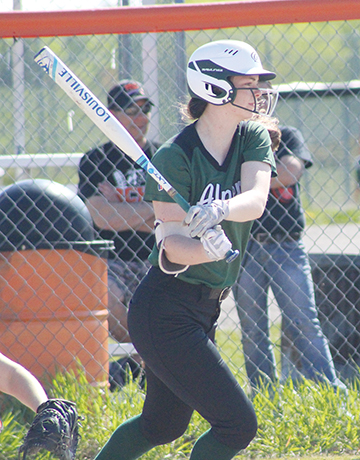 News Photo by Jonny Zawacki Alpena’s Emma Fraser swings at a pitch during game one of a softball doubleheader on Wednesday in Rogers City. After dropping game one, Fraser and the Wildcats responded with a victory in the nightcap.

Alpena opened the scoring in the top of the fourth inning when Sydney Chojnacki hit a solo home run to put the Wildcats on top 1-0, but it was the lone run Alpena scored as Rogers City pitcher Kyrsten Altman was sharp, locating her pitches and limiting the Wildcats’ offense, while being backed by superb defense.

Altman gave up the run and tossed all seven innings as she surrendered seven hits and struck out four.

On the opposite side, Emma Fraser was just as strong on the mound as she allowed just three hits, but the final hit she allowed decided the game.

With two on and two out, Rogers City’s Taylor Fleming stepped in and redeemed herself after striking out in her first two at-bats. Fleming sent a ball to the opposite field over the left field fence for a three-run home run to put the Hurons up 3-1 and a score they went on to win by.

“I thought we really played well. Kyrsten pitched very well and then Taylor got the big hit when we needed it,” Grambau said. “I was happy with the way we played and we made good defensive plays all night, but Alpena’s bats woke up in the second game, but it was a good day and good challenge for us to end our regular season.”

Fraser pitched all six innings for Alpena despite allowing the three-run home run. Fraser struck out six Hurons and held Rogers City to just three hits and suffered the loss.

The Alpena bats woke up in the nightcap in a big way as the Wildcats started off slow, but once they started to string together some hits, runs kept coming in bunches.

Catheryn Hart started the game for Rogers City and pitched four innings before being relieved by Kyley LaFleche.

The Hurons scored the first two runs of the game as Jeffra Dittmar doubled and scored on a wild pitch in the second inning and Altman reached on an error and scored on an RBI single from Hart.

The Hurons led 2-0 after three innings, but the Alpena bats came alive in a big way in the top of the fourth inning as they batted around the order and collected five hits in the inning, including a two-run home run by Maddy Saddler to cap off a five run inning. Allie DeRocher and Aubree Sheldon each added an RBI hit in the inning as well.

Alpena added a run in the sixth and scored five more runs in the seventh, with the big hit coming off the bat of Fraser who cleared the bases with a three RBI double.

“Of course we wish our bats would have came alive a little earlier, but a lot of credit to (Altman), she hit her spots well and kept us off balance and Rogers City played good defense behind her,” Alpena coach Paul Marwede said. “I was happy that we responded and got the bats going and got the victory in what was a clean game played for us.”

The Hurons were held to just four hits in game two as Fraser, Schultz and Lilly Lewis each spent time in the circle.

Alpena finishes the regular season with a 24-11 overall record and will travel to Traverse City Central to play a district semifinal game on Saturday against Gaylord at noon.

Rogers City finishes with a 22-8 overall record and will travel to Atlanta on Saturday to play Johannesburg-Lewiston in a district semifinal contest at noon.

News Photo by Jonny Zawacki Alpena’s Emma Fraser swings at a pitch during game one of a softball doubleheader on Wednesday in Rogers City. After dropping game one, Fraser and the Wildcats responded with a victory in the nightcap.