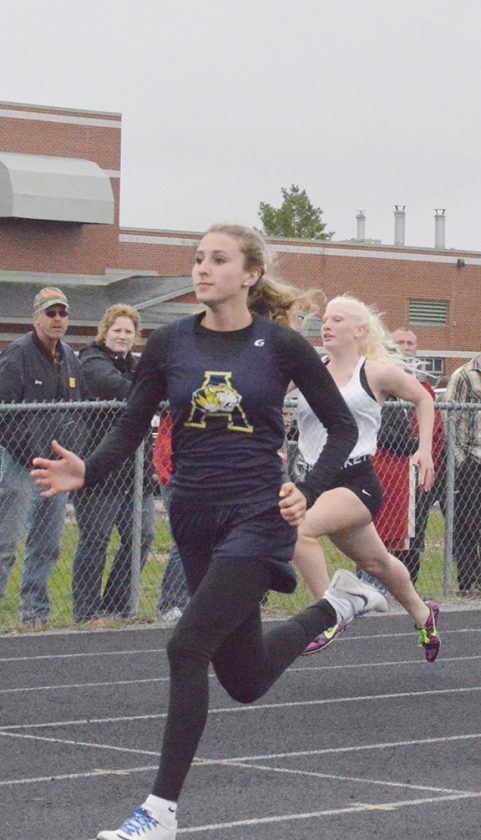 News Photo by James Andersen Alcona sophomore Lily Bilbey runs in the 100 dash at the Alpena News Honor Roll Invitational on Tuesday. Bilbey will run in four events at Division 4 the state finals on Saturday.

Lily Bilbey has a busy weekend ahead of her.

The Alcona sophomore will compete in four different events during the Division 4 track and field state finals at Baldwin Street Middle School in Hudsonville on Saturday.

It’s a tall order for anyone to have a full schedule while competing against the state’s best, but it’s a challenge Bilbey said she’s looking forward to.

“I’m pretty hard on myself, so I try to set high goals, but reachable ones,” Bilbey said. “This year I knew what to expect. Last year I really didn’t know what it was going to be like, how fast I was going to go, what kind of competition (there was). Now I what’s kind of expected.”

Competing in four events at a state finals is an experience Bilbey is familiar with, but also one she’ll be better prepared for this time. She earned all-state honors in the 100 dash and 200 dash after finishing sixth and seventh respectively and also competed in the 400 and 800 relays.

Bilbey said she was nervous last season, but her performances provided a new set of goals for her to achieve going forward.

“It was awesome. I took sixth in the 100, so it was still cool, but it gave me motivation to do better this year,” Bilbey said. “I was extremely nervous. I didn’t really get much sleep, but it was a good thing I think.”

After an impressive freshman season, Bilbey has been even better this year.

She swept the sprints at a regional in Indian River and then did it again less than a week later at the North Star League Championships. She pulled off the sweep again on Tuesday at the Alpena News Honor Roll Invitational.

“It was good weather, good competition, lots of warm-up time and it went pretty well,” Bilbey said of her regional performance. “I was super excited.”

Bilbey proved herself as a standout in the 100 dash and 200 dash last season on the strength of her raw talent alone. She added a new wrinkle to her schedule this season, competing in the 400 dash in order to build up stamina. It’s paid off well as she’s won all but one sprint race she’s competed in.

“Freshman year, I was fast because I was fast. This year I’ve been in the weight room, so I feel a little more confident,” Bilbey said. “(My coaches have) really helped me think about other things (such as different) techniques; like the 400, the ways to run it and the strategy.”

“I’m kind of nervous because now that I have that relay in there, there’s not really a break between my races, but I’m just happy we’re going,” Bilbey said. “We’re a small school, so it means a lot.”