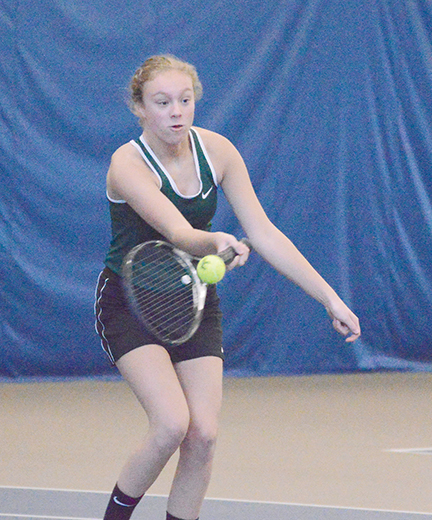 Alpena’s Tilly Williams returns an opponent’s volley during a No. 3 doubles match against Cadillac on Thursday at the APlex.

Every time it takes the court, the Alpena High girls tennis team plays with the goal of making its opponent work, whether the Wildcats win or lose.

The Wildcats made good on that goal on Thursday at the APlex in Alpena, losing 6-2, but making Cadillac work for every point it won.

The results may not have shown it, but the Wildcats had one of their better showings against a Big North Conference in recent memory, extending the entire match out past three hours.

“It was nice to see. We’re a much more competitive team this year,” Alpena coach Charlie Giordano said. “I’m extremely happy with how hard we fought.”

Nowhere was that fight more evident than Brynna Smith’s victory for the Wildcats at No. 2 singles. Smith defeated Alana Hill 7-6 (7), 7-6 (7) in a pair of tie-breakers and the match lasted more than two hours as both players traded points.

“When a match goes back-and-forth and it’s 2-1, 4-3 and then it’s 6-6 and goes to a tie-breaker, tie-breakers are tough. Every point is important,” Giordano said. “She hard to work hard, but she gutted it out well.”

Giordano was pleased with the way his team bounced back after a loss to an 8-0 loss against Petoskey on Monday and said his team looked more comfortable and played smarter.

Emeline Hanna lost to Cadillac’s Oakley Mickelson at No. 3 singles 2-6, 3-6, but was competitive in defeat and Giordano said she looked comfortable as the match went on.

“I told her, ‘You make me want to get out on the court and play, because you look like you’re having fun,'” Giordano said. “She was happy with how she played. She’s finding her groove and improving her shot selection.”

Alpena had a busy schedule next week. The Wildcats will play Bay City All Saints at Delta on Monday and then play at Traverse City Central on Tuesday. Alpena will end the week on Friday at a quad in Petoskey.