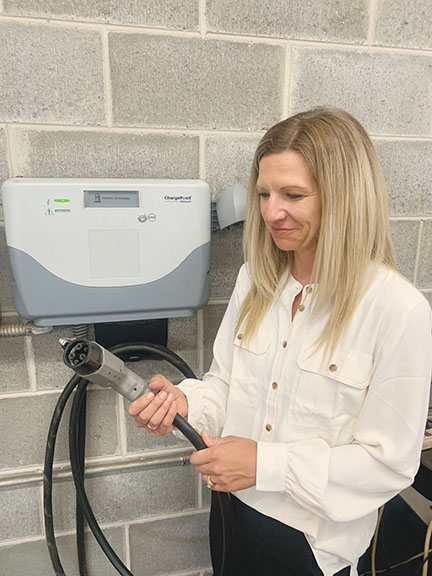 News Photo by Steve Schulwitz Jamie Anschuetz explains how the chargers for electric vehicles at Cliff Anschuetz Chevrolet works. It is as simple as plugging in an appliance and waiting until the battery is ready to roll.

ROGERS CITY — Rogers City is seeking funding that city officials hope will increase the use of electric vehicles and offer service for those who already own them.

Currently, auto dealers in the area have few, if any, electric cars on their lots, but some say more convenient charging options could spark interest in them.

Rogers City is seeking an $80,000 grant from a fund established by Volkswagen as part of its settlement with the federal government over an emissions cheating scandal. The city would use the money to purchase a pair of super fast charging stations that could be installed in the parking lot at the corner of Second and Erie streets.

“If we get the grant, it shouldn’t hurt us financially at all,” McLennan said.

Although electric cars have yet to take off in Northeast Michigan, McLennan said having charging stations included in the city’s infrastructure will make it easier for visitors with electric cars to top off their batteries.

More importantly, he said, it is another way the city is protecting and preserving the environment.

“I want Rogers City to be known for its environmental initiatives,” he said. “That is my goal. This would be just one more thing people can look at and see that we are a green and proactive community, which cares about our natural resources.”

Rogers City will be the only place in Northeast Michigan that will have the more powerful chargers, City Manager Joe Hefele said, and he expects people from outside the area will come and use them. He said drivers of electric cars can locate charging stations via an app on their mobile device and then go to the one they want when a charge is needed.

Many charging stations require the batteries to be charged from six to 12 hours, which is not ideal for someone traveling. The one proposed for Rogers City can fully charge a battery in as little as 90 minutes.

“They can stop, plug in their car, grab a bite to eat and walk through town and then be on their way when their car is done,” he said.

Though there are environmental benefits to using electric cars, and the technology has come a long way, few people in Northeast Michigan are purchasing them.

Mike Lynch Ford general manager Brian Lynch said the dealership in Rogers City is already making inroads toward making the vehicles more available and providing service for them. He said the store is now a member of Ford’s Mach-E program.

The Mach-E is an electric Mustang that comes out later this year that will get about 300 miles on a fully charged battery, depending on the climate, speed and other variables. The program requires dealers who sell the vehicles to be able to service and maintain them.

“Having this takes a lot of commitment from the dealers,” Lynch said. “We will have the chargers at the dealership and be able to service the cars here. In my opinion, that adds a lot to the community.”

The cost of a Mach-E Mustang will range from about $42,000 to more than $50,000, according to Ford’s website. Purchasers will also receive a federal tax credit of $7,500. The premium model is expected to be in lots later in 2020, while the lower-end Select model is set to be released in early 2021.

Bishop Chevrolet and Buick general manager Warren Chamberlain said he doesn’t have any electric vehicles on the lot or in the showroom. There is no demand for electric vehicles in the Rogers City area, he said. But, if that changes, the business will react accordingly.

“We’ve been holding back a little and waiting to see how far this all goes,” Chamberlain said. “We may explore it in the future, but, right now I don’t think we are there, yet.”

Lynch said he believes one day people will elect to drive electric vehicles, and the primary reason will be cost. He said the price of the electric cars has already fallen, and the miles from a battery increased. When you add those two factors together, he said, it equates to more money in people’s wallets.

“You will definitely save money in fuel costs over the life of the vehicle,” Lynch said. “Electricity costs less per mile than it does per mile for gas. We’re now getting into the mileage range and the price range where it is practical.”