AAACU branch at AHS under construction 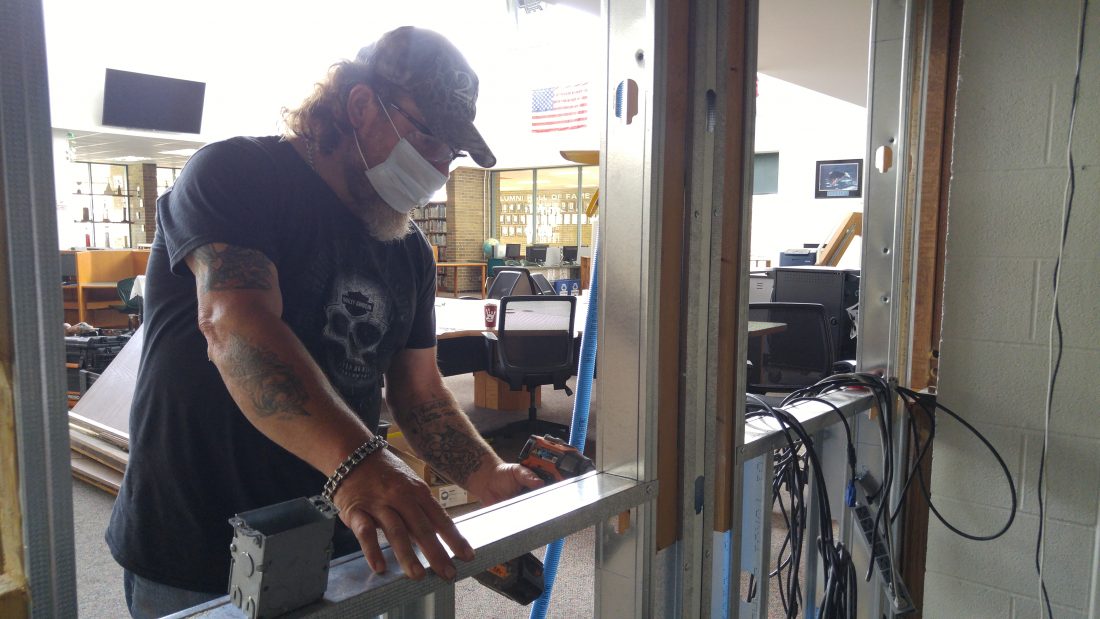 News Photo by Crystal Nelson Randy Buchner, a construction worker with Meridian Contracting Services, works on Tuesday at Alpena High School. A portion of the high school’s media center is being transformed into a student branch of Alpena Alcona Area Credit Union.

ALPENA — Construction on what’s to become a student branch of the Alpena Alcona Area Credit Union is underway at Alpena High School.

The student branch was originally planned to open in January in the high school’s media center, but a series of delays pushed the project back, Alpena High Principal Tom Berriman said.

Berriman said the work could not be done over spring break, so officials scheduled the company to complete the abatement in April — but then the pandemic hit. The asbestos abatement work was not completed until earlier this month.

“The good news is we’re progressing fairly quickly with it,” he said. “(The contractors) are in there currently working, so it looks like things are on track for an opening in August, whenever that may be.”

Berriman said the bank will be run primarily by students under the direction of a supervisor from the credit union.

LeAnn Schultz, AAACU’s director of marketing, said it will be a full-service branch. Interactive tablets and monitors will be installed to teach students about things like debit cards and car loans. An ATM is also planned for the campus.

LeAnn Schultz, Alpena Alcona Area Credit Union’s director of marketing, said the credit union hired two students last year, who are currently working at the credit union, and are training for when the student branch opens.

“The really important thing is that they’re learning from their peers,” she said. “Some of their fellow classmates are the workers at the credit union branch, and they’re excited about the products and services, so they’re teaching it to their fellow students.”

Berriman said the school wants to give kids the opportunity to learn about banking and financial literacy now. When students go to open an account in the real world, they need to know what checking means, how a debit card works, and how a credit card works, he said.

“It’s just another instrument that we have as a school to help our students learn the financial literacy piece,” he said.