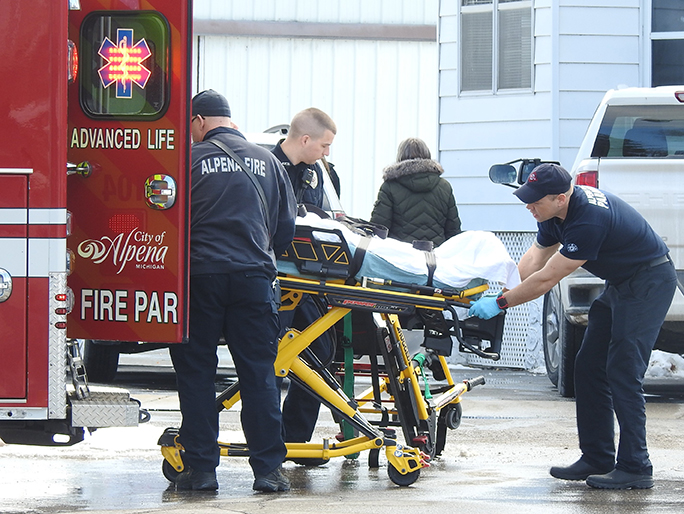 News Photo by Julie Riddle Alpena Fire Department paramedics/firefighters load a patient into an ambulance on a medical call in early March. Public safety employees are among those who benefit from pension plans funded by local governments, for which some communities struggle to pay.

ALPENA — Counties, cities, and other governments in Northeast Michigan are handcuffed with long-term pension debt.

A combined at least $136 million is owed to current and future retirees by nine Northeast Michigan governments, according to The News’ review of debt obligations for local governments that provided data for this story.

Combined, the pension debt for the four counties, three cities, and two road commissions that provided data are 69% funded. That means that, if all retirement benefits earned or expected to be earned were claimed today, those governments could only pay for about seven out of every 10 retirees.

The further behind a government is on their pension debt, the more they have to pay each year to catch up.

In 2019, the governments that provided data paid a combined $5.3 million toward pension debt, equal to about 10% of their combined budgets.

By 2024, Alpena County’s projections show they could be paying 14% of their general fund toward pensions. Rogers City projects nearly a quarter of its budget could go toward pensions, even after that city refinanced its pension debt through bonds.

Alpena County, where 127 retired employees are collecting benefits, has a pension fund that’s 58% funded. It has paid $13 million toward its retirement obligation — including more than $800,000 in 2019.

It still needs about $10 million to pay off its current pension debt.

Making payments that take up nearly 8% of its $10.2 million budget, the county won’t fully fund its obligation for at least 19 years, according to Alpena County Board of Commissioners Chairman Bob Adrian.

The county is on an accelerated plan through Municipal Employees Retirement System of Michigan, Adrian said, which could shave years off of what it would typically take to pay off the debt burden. MERS manages pension accounts for most governments in the state.

The county pays the amount MERS recommends, or a touch more, each year. Annual payments are determined by MERS through a complicated formula that includes projected returns on investment of the pension account and life-expectancy forecasts that change often.

“It is kind of a moving target,” Adrian said. “There can be a quarter-percent change or a small change in life expectancy, and there can be wild swings in the unfunded liability and recommended payments.”

The City of Alpena’s debt burden is less cumbersome.

The city doesn’t utilize MERS, but instead uses another private investing firm to handle retirement funds. As of the most recent report, the city’s retirement debt was nearly 79% funded, but the city still owes about $7.4 million.

“I have complete faith the city will do everything it can to protect its employees,” said Joel Jett, Alpena Police Department chief. But, he acknowledged, “there are things out there that are beyond our control. That’s just the world we live in.”

Alpena Clerk Anna Soik said the city has slowly but surely chipped away at its longstanding debt, but there is more work to do.

Last year, the city switched investment companies to PNC Institutional Advisors in hopes of a higher return on investment — hopes that have been realized since the change, Soik said.

“Right now, we are better off than a lot of municipalities,” Soik said. “We are doing everything we can, because we want to be 100% funded.”

The city has asked employees to contribute to the retirement fund, which helps to reduce the amount of money the city needs to pay out of pocket.

The annual costs of guaranteeing retirement benefits has climbed, largely because of investment losses during the Great Recession and bigger costs as people live longer and, therefore, claim benefits longer. In response, many governments have asked employees to pay more and/or stopped offering pensions to new hires to avoid taking on new debt.

Proper steps need to be taken to be sure funds are there when we need them, the chief said, but a pension plan in the 50% to 70% funded range is “a good, healthy place to be.”

‘REALITY HAS SET IN’

Eyeing retirement in the next few years, Lt. Mike Sanders of the Alpena Fire Department said that, the older he gets, the more he thinks about the importance of financial stability in his later years.

When he was in his 20s, Sanders said, he envisioned himself vigorously fighting fires into his 70s.

Firefighters are eligible for retirement at 55 and required to retire at 60. A physically taxing job, with 24-hour shifts, regular and intense physical training, heavy uniforms, and frequent sleep deprivation, firefighting calls for a high level of physical fitness that doesn’t allow for additional years of income-earning.

Funded pensions, allowing police and fire agencies to recruit, retain, and take care of a highly competent staff, is “an excellent investment on the part of citizens,” Sanders said.

Presque Isle County is in the same boat as most other municipalities in terms of large, outstanding pension debt.

In the 2019 fiscal year, the county allocated $480,000 from its $5.63 million budget to outstanding pension debt. The county still is committed to pay almost $5 million to make the fund whole.

Presque Isle County Commissioner Carl Altman said having to commit large sums of money from the general fund each year makes it hard to pay for building maintenance and other needed projects.

Employees contribute about 4% of their earnings toward their retirement, which should help reduce the pension debt. However, the county pays for the entire cost of health care for employees, meaning less county money available to fund retirement accounts.

If county employees help pay for their health coverage, he said — an option that’s being considered — the county should begin to see savings they can put directly into its unfunded pension liability, Altman said.

“I’ve never gotten a report that says it’s going to be out,” Brewbaker said. “I’ve never read that.”

With retirement, as with anything, there is always the potential for change, regardless of current stability, the sheriff said.

“You worry about stuff,” he said. “But our focus is on coming in, working, doing our job.”

Some municipalities have taken more unorthodox measures to pay off their debt.

Rogers City pushed to get legislation passed that would allow small municipalities with a mid-tier credit rating to sell bonds to pay off pension debt. Essentially, governments could pay off their pension debt with money raised through bond sales, and then pay the more predictable annual payments toward the bond debt.

Before the change in the law, only municipalities with higher credit ratings were allowed to do so.

Because of the use of bonds, payments are stabilized to about $400,000 annually, City Manager Joe Hefele said. Without the bonds, annual payments would have reached nearly $1 million in the coming years.

If that happened, Hefele said, the city would have had to take “drastic measures” during the budgeting process.

“Even if we were to have cut an entire department, we wouldn’t have been able to make our payments,” he said. “This was the perfect option for us and will result in about $4 million savings for our taxpayers. Really, this was the only chance for us to escape bankruptcy.”

Alpena County, and many other communities, will continue to hammer away at their pension debt as best they can, Adrian, the county commissioner, said, while still trying to take care of their employees, buildings, and operations.

He said he wishes MERS had a better way to calculate more accurate numbers, so goal posts aren’t moved as often.

“It seems just like, when we are making progress, MERS changes things and sets us back again,” Adrian said. “It is like trying to nail down Jell-O.”

This story is part of The Alpena News’ recognition of Sunshine Week, an annual celebration of government transparency laws and a chance for open government advocates to push for reforms that increase transparency. The News used Michigan’s Freedom of Information Act to obtain much of the data for this story.

Check out Monday’s edition of The News for a look at how local governments have responded to FOIA requests.