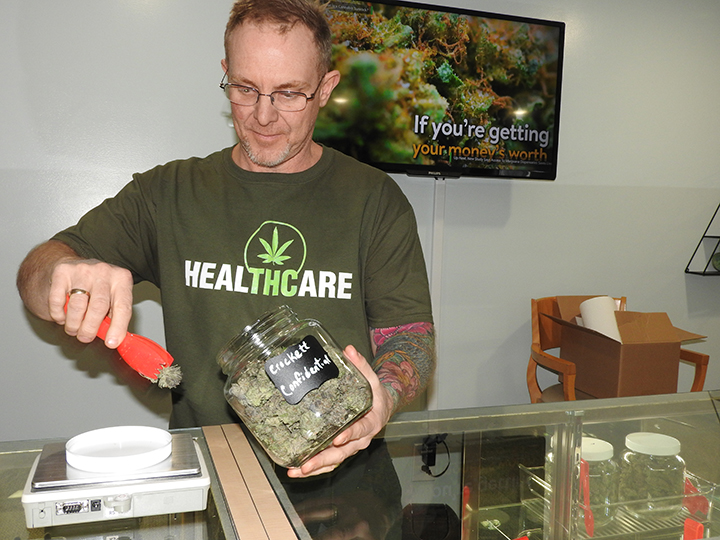 ROGERS CITY — Officials in Rogers Township do not know how much money the township might receive from a recreational marijuana store that opened last week.

“It depends on how much money is generated statewide by that, and then it comes back to us based on the number of facilities that we have, which at this point is one,” Supervisor Randy Smolinski said Monday. “So, it’s hard to extrapolate at any point because we don’t know what’s going to happen in the next year.”

The state collects a 6% sales tax and 10% excise tax on the sale of recreational marijuana.

The state will collect the first $20 million from recreational marijuana sales to disburse for clinical trials over the next two years, according to David Harns, spokesman for the Michigan Department of Licensing and Regulatory Affairs. Another $10 million will be added to the state’s general fund, which Harns says will be used to pay back a loan used to get the state’s Marijuana Regulatory Agency up and running.

Of the remaining funds, 35% will go to schools, 35% to roads agencies, 15% to counties, and 15% to local municipalities that allow recreational marijuana stores within their borders.

“We’re anticipating that it would generate a total of $97.5 million” statewide this fiscal year, said David Zin, chief economist with the state Senate Fiscal Agency.

Smolinski, the Rogers Township supervisor, said any funding received from the state would go into the township’s general fund, but funding from fees as part of the local marijuana shop permitting process is set aside in a separate line item for administrative purposes. The township charges an application fee and $5,000 for each recreational marijuana establishment permit.

While receiving money from the state is one factor in allowing marijuana sales in the township, Smolinski said, employment opportunities and additional property tax revenues were also factors.

Rogers Township will not allow marijuana bars, festivals, or microbusinesses, but will allow an unlimited number of secure transporter and safety compliance permits.

Elsewhere in Northeast Michigan, Onaway also recently agreed to allow a recreational marijuana microbusiness within its industrial park. City officials in July heard from Bernie and Ben Kolasa, who are interested in starting a microbusiness.

City Manager Kelly Stockwell said the Kolasas have yet to file an application. The Onaway City Commission ultimately agreed to allow two microbusinesses in its industrial park.

Presque Isle County Building and Zoning Official Mike Libby said he doesn’t know how much funding the county would get from recreational marijuana, and county officials have yet to discuss what they would do with that funding.

That ordinance only applies to townships that utilize the county’s zoning and where township officials decide to allow facilities in their jurisdiction. Townships affected include Bearinger, Belknap, Bismark, Case, Metz, Moltke, North Allis, Ocqueoc, Posen, Pulawski and Rogers townships.