But officials push ahead on that and other projects 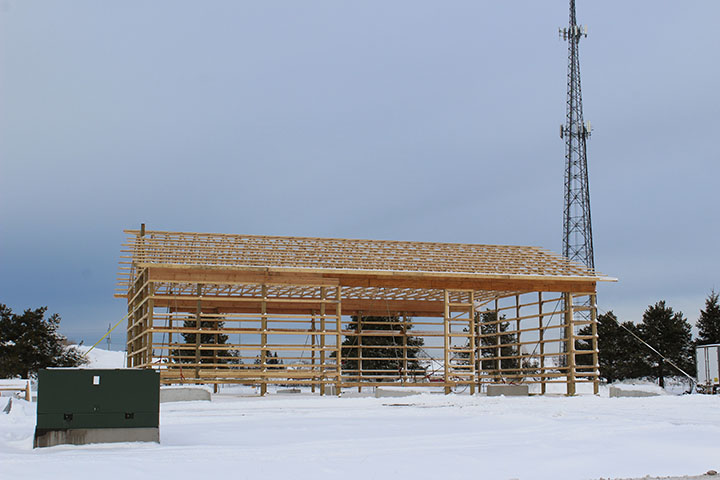 News Photo by Steve Schulwitz Development projects in Alpena always slow during the winter, but some are still moving forward, such as this new construction on Commerce Drive seen on Tuesday. Local economic development officials are continuing to work on the sale of other property and spur new growth in the area.

ALPENA — A $5,000 deposit on the former Alpena Power Co. property downtown had to be returned after an investor backed out, Alpena’s economic development official told the Municipal Council on Tuesday.

The Alpena Area Chamber of Commerce’s new economic development director, Mike Mahler, told the council the investor had entered into an option agreement for the purchase of the property on the Thunder Bay River.

Mahler said the planned dual-use development would have included condominiums, but the investor returned his deposit after his research showed the needed investment may not be worth it because of Alpena’s current housing market.

“The project, based on the analysis, was just not viable, unfortunately,” Mahler said. “One of the headwinds we face in this area is the cost of construction is the same as everywhere else, but the price points are just lower. And, when an investor pays $225 a square foot to build a nice condo, you aren’t able to collect the kind of price needed to get a return on investment.”

Mahler said he will continue to work with the city and other partners to find the right buyer and project for the property, which has been owned by economic development firm Target Alpena since 2015.

The potential sale of the property was first announced in September.

Meanwhile, another project is in the works, but few details are known at this time.

Mahler said an investor has expressed interest in the former antique mall on 2nd Avenue downtown. He said that sale is pending and may or may not happen.

If it doesn’t, “we will continue to work aggressively to find a buyer for it,” Mahler said.

He said the property “has the potential for so much, and a lot of upside for it.”

The antique mall closed in spring 2019 after 20 years in business.

Mahler would neither confirm nor deny to The News whether the sale of that property hinges on whether the council allows the sale medical marijuana downtown.

Council members are expected to vote soon on whether or not to allow medical marijuana facilities in the city. There has been debate as to whether those types of businesses should be able to operate in the heart of downtown.

Trump expresses optimism for US peace deal with Taliban