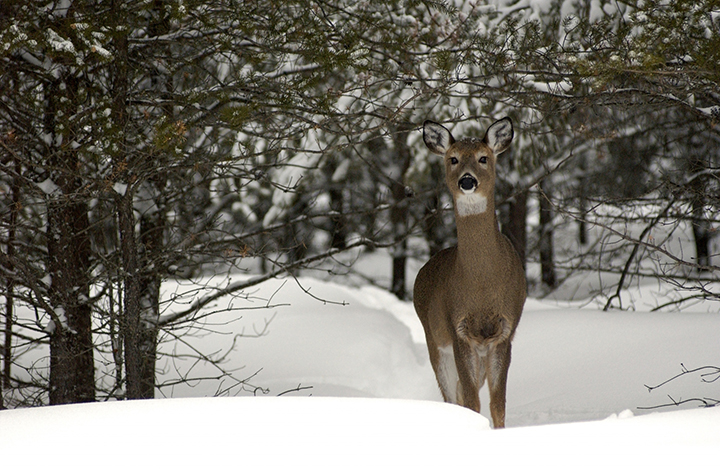 Courtesy Photo This photo from the Michigan Department of Natural Resources shows a deer in a snowy Michigan woods.

ALPENA — Michigan’s deer hunting season is almost like a holiday for many families in Alpena, but the Michigan Department of Natural Resources says there could be more disappointed hunters this year as the early arrival of winter may have thrown a monkey wrench into deer movement and feeding patterns.

Today is opening day of rifle season in Michigan, and thousands of people will hit the woods looking to fill their freezers with venison.

According to DNR biologist Ashley Autenrieth, however, early indicators are showing that the number of deer harvested this year may not reach the numbers of last year.

She said the weather pattern most of the state has experienced the last several weeks is the main reason why. She said the early cold and snow will impact the hunt.

“If you would have asked me last month, I would have told you the hunt would be like last year, but that has all changed when we got the cold and snow much earlier than expected,” Autenrieth said. “If it was just a dusting of snow, it would be wonderful, especially for tracking, but this is more than a dusting, and the patterns for the heard have shifted.”

If there isn’t a break in the weather, Autenrieth said, there could be a long-term impact on the herd as a whole. She said the cold and snow already are forcing the animals to search harder for food and, when more snow and harsh temperatures arrive, it will become harder still.

“Maybe we can get a December thaw or an early spring, but, if the winter drags on and on, there will definitely be a negative impact on the deer,” she said. “This type of early winter weather doesn’t help the herd, health-wise.”

As is the tradition, school is not scheduled for today so students can take part in Opening Day.

Alpena Public Schools Superintendent John VanWagoner said hunting and spending time with family on opening day is important, and the school system believes kids should be allowed to partake.

He said even students who may not hunt usually get to spend time with family members who they may not see often and are in the area to hunt.

“It is a time of family reunion and almost like Thanksgiving in northern Michigan,” VanWagoner said. “It is pretty much a holiday here, and it is a good thing to have the kids spend time with their families, whether they hunt or not.”