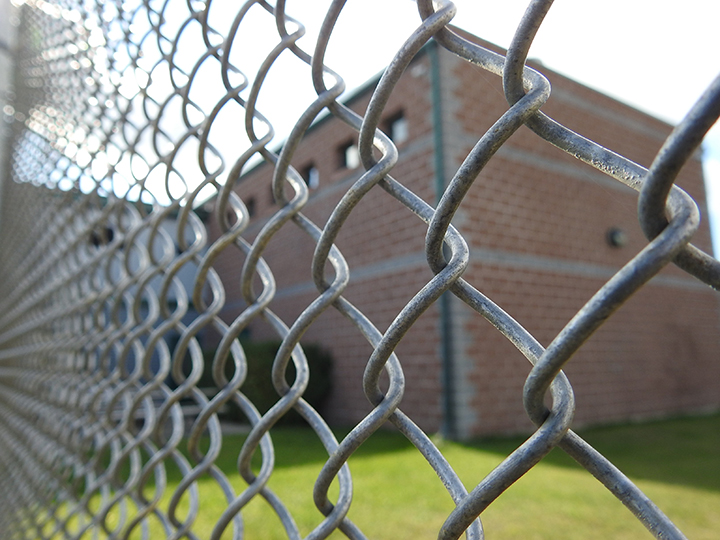 News Photo by Julie Riddle At a juvenile detention center in St. Ignace, fences and locked doors surround young people who have become a part of the criminal justice system.

Kids will be kids, the adage goes.

A question raised recently at the state level had legislators debating a question that logically follows: What IS a kid?

A recent change to state law, signed by Gov. Gretchen Whitmer in October, raises the age of designation for adults in the criminal justice system. Where previously a 17-year-old was considered an adult by the courts, defendants in that age bracket can now be treated as children.

In the juvenile court in Alcona County, where young people in their teenage years stand before the court and face the consequences of choices they have made, Judge Laura Frawley sees the societal forces and physical realities that bring a child into the very adult world of police officers, probation officers, and lawyers.

The legislative change acknowledges the incomplete growth of an adolescent brain — which lacks the complete ability to make risk/benefit analysis — and gives space for rehabilitation in place of punishment, Frawley said. It doesn’t, however, address the root causes that brought the young person there in the first place.

Juvenile criminal behavior can be, and often is, caused by the physical changes to the brain resulting from exposure to traumatic situations, experts say. Domestic violence, parental drug use, or physical or sexual abuse can change the physical makeup of a developing brain, leading to behavior that results in an encounter with the juvenile justice system.

In 2017, according to the Michigan State Police, juveniles were arrested for 62 crimes in Alpena County, with high numbers of offenses in the categories of larceny and liquor laws. In Alcona, Montmorency, and Presque Isle counties, the numbers of arrests for that year were two, 12, and six, respectively.

Police officers encountering a teen engaging in illegal behavior may be more likely to know if it’s in that child’s best interest to dump out a beer or discard a marajuana joint and send the child home with a warning, or, if that child doesn’t have adequate support at home, to forward him or her to the juvenile justice system for help that may keep risky behavior from becoming adult criminal activity.

‘THEY GO HOME TO THE SAME FAMILY’

In Alcona County, which has one of the the highest percentages of grandparents raising grandchildren in the state, according to a study by the Northeast Michigan Community Services Agency, young people are often left to essentially raise themselves.

In that county’s juvenile court, Frawley has seen young people who are the third generation in which the highest aspiration is to receive federal aid and where involvement in the criminal justice system is almost a family tradition.

To try to keep some youth out of the system, the county courts started a community mentoring program, connecting volunteers to young people without family support to make sure their homework is done and to give needed adult guidance.

Frawley made efforts at starting an open mic night, hoping to offer something to do for the kids not involved in sports. In a rural county, Frawley said, with nothing much else to do, kids as young as junior high fill the void by going into the woods to drink, often leading to a run-in with law enforcement or the courts.

In the courtroom, Frawley speaks to young people bluntly, offering advice and levying probation and detention sentencings to try to steer each young person back onto a safe path.

They go away, they do better, she said, “and then they come home to the same family.”

Generational ills that are never cured are the deep drivers that bring young people to court, according to Alpena County Prosecutor Ed Black. Substance abuse and physical abuse are often handed from one generation to another, sometimes because no better example has been shown, sometimes as a way to hide from pain. Black’s office prosecutes many individuals for substance abuse who were previous victims of sexual assault, the trauma of youthful experience leading to a criminal adulthood.

“It’s a whole-societal thing,” Black said with a deep sigh.

Catholic Human Services, a provider of counseling and social services in partnership with local, county, and state agencies, tailors several of its programs to strengthening at-risk families.

Courts, service agencies, and other systems are responding to the needs of kids, said Larry LaCross, clinical supervisor at Catholic Human Services’ Alpena office, but, “systems can’t raise the children.”

Catholic Human Services’ Family Recovery Care Team functions on the premise that better coordination of care equals better outcomes. Through that program, a care coordinator works with families who have entered the child welfare system because of addiction or juvenile delinquency to make sure they have access to any agency or program needed to increase their family health.

The program also reaches out to families who are not already in the child welfare system but are at risk of being so.

Home-based programs, in which workers interact with families on their territory, allow Catholic Human Services workers to delve into the home life of young people, both after and before they encounter trouble, and to work with the family to develop a plan of action.

“If you want to really transform a child’s life, you allow their parents to act as parents and help the family to be healthy,” LaCross said.

‘THE ROAD YOU WANT TO BE ON’

Connections to home life are the root of success in helping juvenile offenders, those who work in the system say.

For the past several years in Presque Isle County, two hand-picked compliance officers have conducted random checks on youth in the family court system, making sure they are following the rules of probation.

The compliance officer program was begun with the goal of saving the county money by keeping juveniles out of detention centers, treatment facilities, and foster care. That effort paid off, saving about a quarter-million dollars in its first year, according to Danielle Streich, the county’s juvenile probation officer.

More than that, however, the program forged a new level of connection between families and the court, bringing both parties together to work on a common goal: a successful child.

The probation officer’s doors are open not only to children in the system, but also to parents in the community who are concerned their children are on a path that may lead to the courtroom. She offers what help she can to head off potential wayward actions, including giving tours of the jail to rebellious 12- and 13-year-olds, giving them a glimpse of what their future could look like, depending on the choices they make.

Getting in trouble with the law shouldn’t change the trajectory of a child’s life, Streich said. One of her jobs is to help young offenders see that their time in the criminal justice system is a “blip on the radar,” one which doesn’t need to define them.

She recounted a day in family court when the judge told a tough-countenanced boy who stood before him, “You’re not a bad kid.”

“That, sometimes, is all they need,” Streich said. “They feel, ‘If I’m a waste, or I’m horrible, I might as well act it.’ They live their prophecy. They live what they’ve been told.”

The juvenile court system, though it is hard on individuals and families, is designed not to punish, but to make things better.

“Clean slate, start over, get to be an adult, and do your thing,” she tells them.

Streich has had kids come back as adults to tell her they once hated her. They also tell her, though, that the juvenile justice system changed their lives for the better.

Not all stories end so neatly, Streich said. The ones who fall to the wayside, who end up standing in front of a judge or sitting in a jail cell as adults, those are tougher to handle.

Those, Streich said, are the ones she visits in jail, letting them know she still sees them, is still there for them.

Working with young people who need help isn’t always easy, for probation officers or social service agencies or for prosecutors or judges. It isn’t always appreciated. It highlights seemingly hopeless situations and requires endless efforts to find the right solution for each child.

But, for those entrusted with the job, it’s totally worth the work.

“You don’t know what they need until they actually get it,” Streich said, “and you’re like, ‘Thank God I was part of that.'”