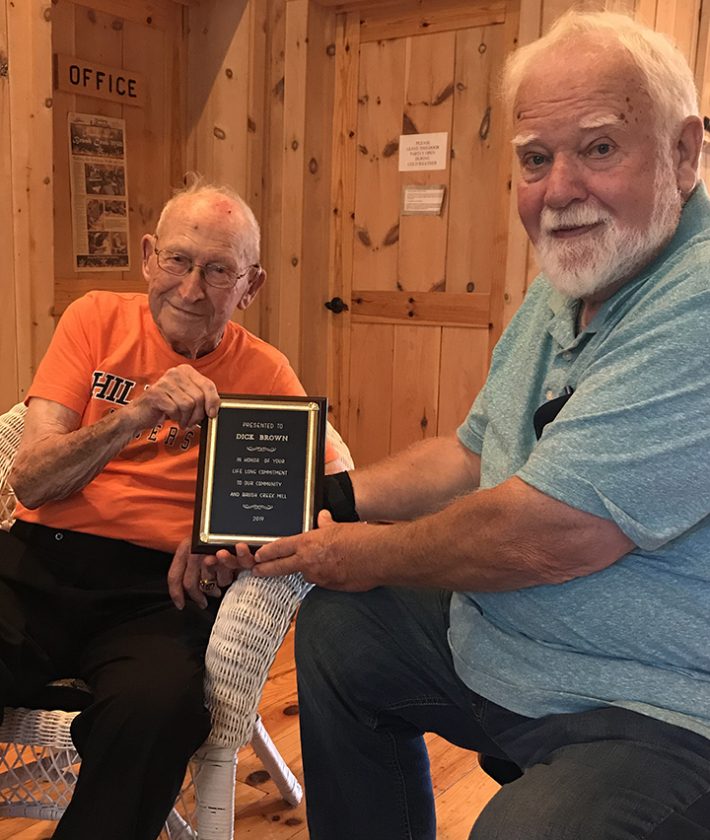 News Photo by Julie Goldberg Dick Brown, left, is given a plaque to honor his lifelong commitment to Brush Creek Mill from mill interim director Tom Edison on Saturday.

HILLMAN — A surprise party was held at Brush Creek Mill Saturday to honor a 99-year-old volunteer.

Dick Brown was honored by friends after volunteering at the mill for a long time.

He had no idea the party was being thrown for him.

“I knew there was something going on when I walked in the door and everyone started clapping,” Brown said. “I was just surprised.”

Brown’s niece wanted to check out the mill’s gift shop and Brown knew there was something going on when he saw all the cars outside the building.

“I just wanted to see who was still here and when I saw all the cars, I said maybe we shouldn’t go in because there’s something going on,” Brown said.

Brown, who turns 100 in the spring, said the surprise party was one of the nicest things that’s ever happened to him.

“It’s wonderful and so nice,” Brown said. “I’ve had some nice things happen, but this is one of the nicest.”

Edison said the plan was to always throw a party for Brown, but the surprise part was having all the people show up to celebrate him.

“It worked out to plan,” Edison said.

Brown said volunteering at the mill was great because the people were always nice to him. He said he always felt like he fit in while at the mill.

Brown worked on the Hillman Village Council for over 30 years and is also a World War II veteran.