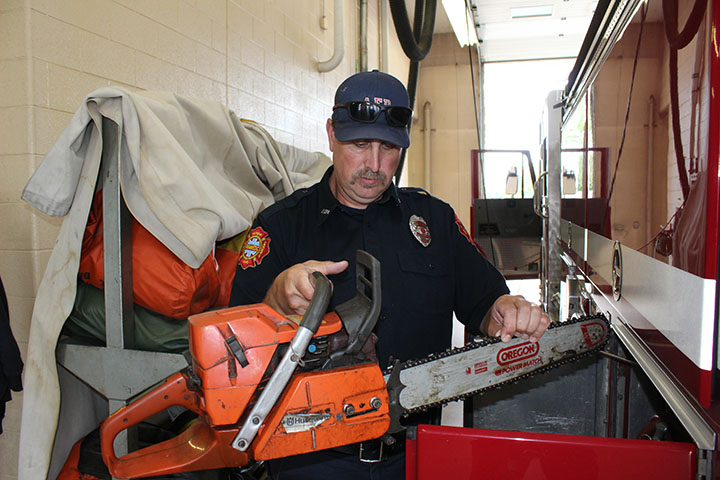 News Photo by Steve Schulwitz Alpena firefighter/paramedic Doug Krueger does some basic maintenance to one of the department’s chainsaws. As a city employee, Krueger pays into the city’s pension fund, which is only 79% funded. Alpena County on the other hand is only 62% funded, and owes about $9 million.

ALPENA — As some municipalities continue to struggle with budget shortfalls, rising health care costs for current and past employees, and shrinking staffs, perhaps the most pressing issue facing local governments is what they owe toward pension benefits.

Many municipalities are well short of being fully funded for what they owe to current and future retirees. Although increases in contributions to the retirement funds are being allocated, some local governments are continuing to lose ground and the unfunded liability continues to grow.

Alpena County utilizes the Municipal Employees Retirement System of Michigan to manage its pension funds. The county has gone from a 76%-funded $3 million liability in 2004 to a 62%-funded $8.9 million at the end of 2018. That means that, if all pension benefits earned today were claimed at the same time, the county has only set aside enough money to pay about three out of every five retirees.

The amount the county owes has ballooned despite hundreds of thousands of dollars being allocated from the county’s general fund largely because retirees are living longer, meaning the county has to pay more for the lifetime pensions.

To fully fund its pension obligations, the county would have to pay $115,021 each month for the next 10 years. That is unlikely because of current budget restraints and debt.

The county has a roughly $10 million annual budget.

County Clerk Bonnie Friedrichs said that, currently, 127 retirees and beneficiaries collect pensions from the county. That is more than the number of county employees paying pension contributions out of their paychecks. She said people are living to be older, so benefits are paid longer, which also impacts the county’s pension liability.

If things don’t take an abrupt turn, and the unfunded amount dips to 60% or lower, MERS becomes directly involved.

“They help you come up with a plan to meet your obligation,” she said. “They can encourage the boards to make larger contributions and that benefit divisions be frozen.”

Governments across Michigan have struggled with pension debt since MERS recalculated its cost forecasts based on a complicated formula that takes into account average lifespans, number of retirees, number of active employees paying into the system, and more.

Several governments have had to make significant changes to catch up. Rogers City, for example, recently closed its pension plan to new hires and is seeking to sell bonds to pay off its pension debt. Its annual payments toward the bond debt would be lower than its current pension payments.

Rogers City is only about 50% funded in its MERS obligations.

Friedrichs said that, as of now, there has been no real consideration of the county selling bonds, although the idea has been mentioned briefly.

Friedrichs said that, for some departments, employee pension plans are not as exuberant as they were in the past. By asking employees to contribute toward their own retirement, future pension obligations will be less.

That is years down the road, however.

The City of Alpena’s pension outlook is a bit better, but its liability also continues to grow.

As recently as 2008, the city’s pension fund was more than 100% funded, but it is now down to 79% funded. The city has also allocated large sums of money into its pension program to try to keep up.

The city has a $9.9 million annual general fund budget.

According to city Clerk/Treasurer Anna Soik, 95 retirees and beneficiaries are currently collecting pensions.

The city doesn’t utilize MERS, but uses a retirement consulting and investment company called PNC Institutional Advisory Solutions. The city pays into the system, as do employees. Soik said a switch in investors has also led to bigger returns — $2.5 million from June 30, 2018, to June 30 of this year.

“We hope we will continue to have good investments, so the city doesn’t have to contribute as much,” Soik said. “We aren’t where we would like to be, considering we were more than 100% funded, but we’re doing everything we can to stay on top of this.”