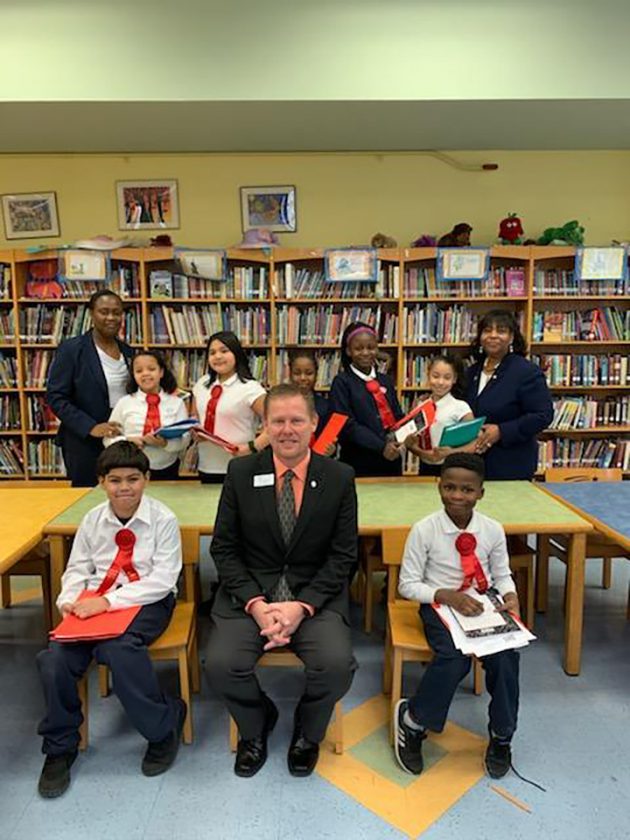 Courtesy Photo Former Besser Elementary School principal Eric Cardwell, center, is seen here in February with students and staff at PS 114 Luis Llorens Torres School in Bronx, New York. The school was one of his many stops during his year as president of the National Association of Elementary School Principals.

Throughout the year, Cardwell, 50, traveled all over the U.S. to different schools, but also traveled to Puerto Rico and Thailand. He participated as a keynote speaker at different conferences. The presidency of NAESP rotates every year.

“This past year has been one of the most incredible years of my professional career, just seeing all the good that is occurring within the schools throughout the United States,” Cardwell said.

Cardwell said he had an opportunity of a lifetime to serve as NAESP president, because he never expected to be in that position.

“I’m not going to be sad (that it’s over), because I am blessed to have had those opportunities and meet people and make lifelong relationships that will continue beyond this year with educators,” he said.

While president, Cardwell worked to have a closer relationship with the National Association of Secondary School Principals, and he believes he accomplished that, because, starting in 2023, the two associations will hold a joint conference to work collaboratively.

“I like to think that I made the world a little bit better for kids and educators in our nation,” Cardwell said.

Cardwell retired from Alpena Public Schools in the spring after 10 years as principal at Besser and Sanborn elementaries. He is now a co-facilitator for the National Aspiring Principals Academy and will teach for that group throughout the next nine months.

“It’s about supporting the new principals before they get into the profession,” Cardwell said. “Beyond that, I’m weighing different possible opportunities, both in the private sector, but then also in nonprofit. I’m going to decide what I do when I grow up.”

Cardwell said he would put Alpena Schools and its teachers up against the best in the country. He said Alpena is fortunate to have the level of professionalism that he’s seen with the teachers.

“They’re doing the best they can with kids and for kids,” he said.