Alpena, you have been challenged 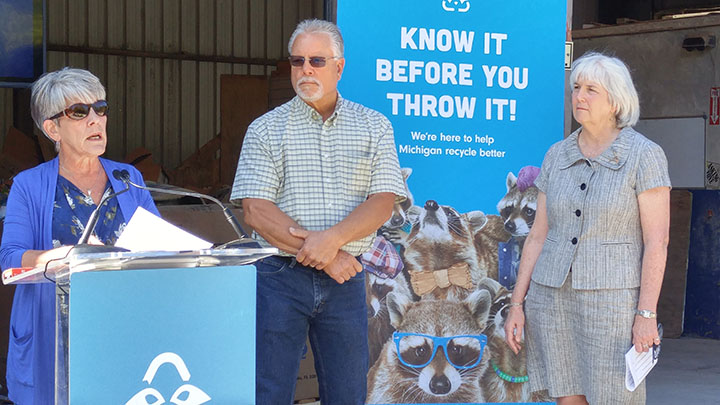 News photo by Crystal Nelson State Rep. Sue Allor, R-Wolverine, speaks to constituents who attended the kickoff Monday of the state’s Know It Before You Throw It campaign to educate residents about recycling.

ALEPNA — A new initiative designed to get residents of Northeast Michigan recycling correctly kicked off Monday at the Alpena Resource Recovery Facility with a community recycling challenge for the residents of Alpena County.

State and local officials on Monday challenged residents to recycle 2 million pounds of plastics, paper, and cardboard by the end of the year. The challenge is part of the state’s Know It Before You Throw It campaign designed to educate Michigan residents on how to recycle better by putting only recyclable materials into the recycle bins.

Cindy Johnson, Alpena mayor pro-tempore, said staff at the Resource Recovery Facility have already collected and shipped 1.21 million pounds of plastics, paper, and cardboard from Nov. 1, 2018 to July 30 of this year, so 800,000 pounds more are needed by Dec. 31.

“That’s where the public comes in,” Johnson said.

Brad McRoberts, chairman of the Alpena County Board of Commissioners, called for residents and businesses to join with the Michigan Department of Environment, Great Lakes, and Energy to help propel Alpena County to a record-breaking level of recycling.

Liz Browne, assistant director of EGLE’s Materials Management Division, said the campaign is the agency’s first-ever statewide effort to increase recycling and to help people start recycling correctly. Browne said Michigan currently has a recycling rate of 15%, which is the lowest in the Great Lakes region and among the lowest in the nation.

“It’s our goal to promote awareness of cleaner recycling practices, to reduce the amount of dirty, unrecycleable materials improperly going into recycling bins,” Browne said. “We want to double Michigan’s recycling rate to 30% by 2025 and eventually get to 45% annually. We’ve got a lot of work to get there.”

If DEGLE reached its 30% recycling goal, it would produce almost 13,000 jobs statewide and would have an economic impact of up to $300 million annually, the agency said.

“It’s good for businesses,” Jackie Krawczak, president and CEO of the Alpena Area Chamber of Commerce, said. “This campaign will help employers create more prosperous local economies, so we’re 100% supportive of this effort, and we would hope to see us surpass that 30% goal.”

Browne said DEGLE knows education is the key to getting people to recycle properly.

She cited a poll conducted by DEGLE that showed 50% of Michigan residents believe they can throw plastic bags into their recycling bins, though that’s actually prohibited by most municipalities.

Browne said the poll also revealed more than 75% of Michigan residents are are unaware that, if you don’t rinse and dry your recyclable materials before you put them in the recycling bin, you can contaminate the whole truckload.

State Rep. Sue Allor, R-Wolverine, who represents Northeast Michigan, said recycling in Michigan is receiving a major boost this year, with the Legislature increasing funding for recycling projects to $15 million.

“These extra funds are being used to support development of recycling markets, to increase access to recycling opportunities, and to support planning efforts that will grow recycling at the local level,” Allor said. “The many changes within the recycling industry are resulting in higher costs for some local goverments that fail to meet new, industrywide cleanliness standards for recyclable materials. That’s why it’s essential for all of us to help spread the Know It Before You Throw It message and strengthen Alpena County’s commitment to embracing best practices in recycling.”

The Know It Before You Throw It campaign will be promoted across many platforms, including radio and television stations and billboards. The campaign will feature the Recycling Racoon Squad, a group of six raccoons with distinct personalities who will point out a number of common recycling mistakes and best practices throughout the educational campaign.

For more information on the campaign, visit recyclingraccoons.org.