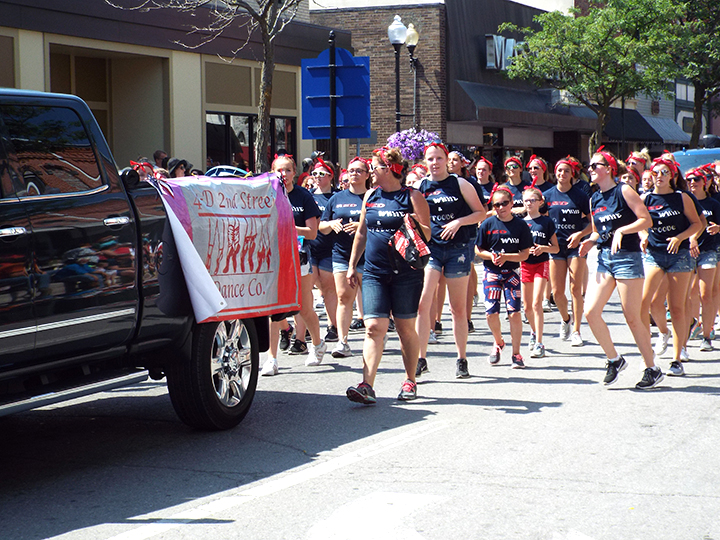 News File Photo A scene from the 2018 Independence Day parade through downtown Alpena.

ALPENA — Those planning to celebrate the Fourth of July in Alpena have a number of festivities to choose from.

Alpena Area Chamber of Commerce President and Chief Executive Officer Jackie Krawczak said the chamber is really grateful that so many organizations host events the Fourth of July and make the communitywide celebration possible.

“The whole community is aware that it is a really busy and fun day, but what’s cool about it is it’s not one organization that puts everything on, it’s multiple organizations that each take a piece of it,” she said. “That is a great example of how very successful things can happen.”

Here’s a roundup of some of the events happening around town:

∫ The Thunder Bay Maritime Heritage Festival begins at 4 p.m. today with registration for the sixth annual Battle of the Paddles, a 3K paddleboard and solo kayak race, at Rotary Island. The race begins promptly at 5:30 p.m. with the course starting at Rotary Island Footbridge to the Second Avenue Bridge and back.

A craft beer tasting event on the pool deck will follow from 4:30 to 8 p.m., with live music by The Way Down Wanderers.

∫ Independence Day estivities kick off at 7 a.m., with registration for the Dork Brothers Independence Day 5K Run/Walk and 1 Mile Fun Run at the APlex. The mile race starts at 8:30 a.m. and the 5K will follow at 9 a.m. It costs $10 for a student to participate in the race, $20 per adult, or $40 per family.

∫ Registration for The News’ annual Sandcastle Contest begins at 8:30 a.m. at Starlight Beach. The contest is free an open to the public. For $1, visitors can vote for their favorite sandcastle. Proceeds from the people’s choice voting will be donated to the 2020 fireworks fund.

“We have a lot of returning businesses and organizations that always put a lot of time and effort into their floats,” Stutzman said. “We have a handful (of floats) with live music. We have a lot of people we’ve talked to who are very excited about it.”

The parade will be held rain or shine.

∫ The Alpena Optimist Rubber Duck Race will follow the parade, with ducks being released from the 9th Avenue bridge and floating down the river to Rotary Island Mill Park.

∫ Entertainment begins at 11 a.m. in the big tent, with High Speed performing a variety classic rock, pop, and country music from 11 a.m. to 1 p.m. and The Way Down Wanderers performing from 1 to 2:30 p.m.

∫ Artists will be at work from 10 a.m. to 2 p.m. for the festival’s first sidewalk chalk art competition along the Maritime Heritage Trail. The deadline to register for the competition is noon today. People’s choice voting will be held from 3 to 3:45 p.m.

∫ The Cardboard Boat Regatta will begin at 2:30 p.m. on the Thunder Bay River and an awards ceremony will follow at 4 p.m. Setup is from 11 a.m. to 1 p.m., which is the check-in deadline and judges review.

∫ The city band will perform a selection of patriotic music starting at 5:30 p.m. at the bandshell in Bay View Park. The Rock Show, featuring Tommy K, will follow at 7 p.m. The concert will feature classic rock hits from the 1970s and 1980s and is part of True North Radio Network’s Summer Concerts in the Park.

∫ The festivities will culminate with the fireworks, which begin at dusk, usually around 10 p.m. Fireworks are launched near Alpena’s water treatment plant and can be viewd from Starlite Beach, Mich-e-ke-wis Park, Blair Street Park, Thomson Park, Bay View Park, the city marina, and other locations around the city.

The Chamber of Commerce’s fireworks fundraising goal was $22,500 this year, and staffers and volunteer raised $850 more than that, according to Krawczak. The additional funds means the chamber can spend more money on the show, which Krawczak says typically lasts about 40 minutes.

“We just encourage people to be safe and respect the boundaries that are set out by the fireworks company,” she said. “We don’t want anybody getting injured, of course.”

City officials will begin enforcing an 800-foot safety perimeter around the fireworks site today until the end of the fireworks show on Thursday, according to a press release from the city. The perimeter will be clearly marked and citizens are asked to stay out of the marked-off area for their own safety and to allow a safe working area for the fireworks company.

In the event of inclement weather, the fireworks display may be postponed to July 5.

Can’t make it to Alpena? Here’s a roundup of other Fourth of July activities around Northeast Michigan. The list is not comprehensive.

∫ Atlanta will kick off its Fourth of July festivities with a pancake breakfast from 8 to 11 a.m. Thursday in Briley Township Park, hosted by the Lions Club. The annual parade will begin at 6 p.m., starting at the Montmorency County Courthouse and ending at the Post Office. Fireworks begin at dusk at Atlanta Community Schools.

∫ Onaway’s Fourth of July fireworks can be viewed at dusk Thursday at Horrocks Field near the airport on M-211 in Onaway. Fireworks will also be held at dusk on Saturday at the Onaway Speedway, 4624 M-33.

∫ The Hubbard Lake fireworks launched from the Hardwoods will be held at dusk Saturday and can be viewed from all public launches. Proceeds from sales of $5 glow-in-the-dark bracelet will benefit the building fund for the Hubbard Lake Library and Community Center. In case of rain, fireworks will be rescheduled for July 7.

∫ Harrisville will be host its Fourth of July festivities on Saturday, with the 43rd annual Children’s Parade beginning at 1 p.m. The parade will start on Main Street and end at the Harbor. The annual duck race at Mill Pond will take place at 4 p.m. and fireworks will begin at dusk at the Harrisville Harbor.