‘For that one person’ 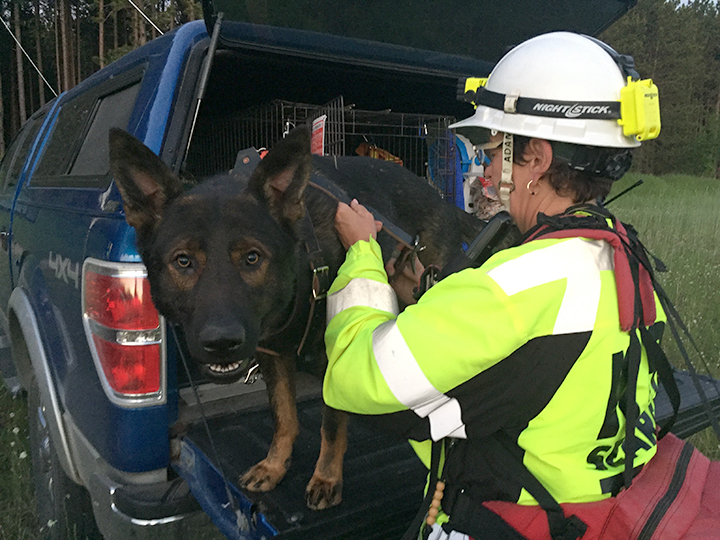 ATLANTA–Circles of bobbing light moved between the trees as hip-high ferns swooshed around the human searchers.

Ahead of them, the ferns rustled and swayed, parting and falling together again in a sinuous path that snaked forward, quickly, surely.

The caravan jerked to a stop. Ahead, in the headlamp light, two triangle ears poked up out of the ferns, and then a nose.

Finley, a 17-month-old German shepherd, jerked his head to the side, investigating a sound. The head disappeared once again, and again the ferns began to move.

The Alpena County Search and Rescue team’s monthly training exercise, held Saturday and Sunday in the forest north of Atlanta, for the first time incorporated a night search, providing practice in the night-tracking skills sometimes needed when human and canine members of the team are called on to locate a missing person in northern Michigan.

The search and rescue team, one of many such organizations around the state, is an all-volunteer organization. The 11 humans and nine canines on the team conduct monthly rescue scenarios and weekly dog trainings, in addition to extensive education to allow the team to qualify for state-level certification.

Team members are certified in such areas as land navigation, evidence marking, ropes and rescue equipment, incident management, and basic survival. Their training ensures, very importantly, that they don’t become another lost person in the woods.

According to the U.S. Department of Justice, 600,000 people go missing every year in the U.S. Nearly 4,000 people are currently missing in Michigan, including one person from Presque Isle County and seven from Alpena County.

Those statistics are why the team exists, and why they train.

Search and rescue dogs fall into three categories. Area search dogs run off-leash, catching scents from the air within given coordinates, covering up to 80 acres in two hours. They can be scent-specific, looking for one particular person, but they are also trained to find any living human, making them ideal for a search in a wilderness setting.

Trailing dogs stay on a long lead and follow the scent trail of a specific person after they’ve been given a scent indicator, such as an article of clothing or a set of keys or even a door handle. After catching the scent on the ground or in the foliage, the dog is off at a run, nose to the ground, its handler following close behind.

Human remains detection dogs locate anything that comes from a human body, from a limb to a tooth to cremation ashes. In 2008, a dog from the Alpena County team detected previously undiscovered drops of blood in a cold case in Newberry, alerting law enforcement of the possibility of foul play.

The dogs on the team are not only searchers but also the pets of their trainers. They come with their own stories and personalities: Zeke the rookie, a recent shelter rescue. Trailer-in-training Dante, nicknamed The Velociraptor for his ferocity when guarding a toy. Retiree Sammie, a Malinois with police dog bloodlines and intense joy when catching a flying discus.

When it’s time to work, though, the dogs have one mind, one focus, one intent: to find.

Bells and GPS signalers on their collars, they crash through brush, bound through shoulder-high grasses, zig and zag and go until they reach the end of the trail and find what — or who — was lost.

Each canine has its own way of communicating a find to its handler. A dog may spin in a circle, or plant its front paws on its handler’s chest, or grab a ribbon hung from a belt. Always, when the lost has been found, even when the find is a sad one, in human terms, the dog is rewarded with gushing words of praise and a toy or treat.

The hunt has to remain a game, one the dogs are eager to play over and over again.

Civilian search and rescue teams can’t self-deploy and have to wait to be called in by a law enforcement agency.

When they do go, they go full-speed.

In September 2017, a woman went missing in the Thunder Bay River State Forest, just south of Alpena. Police searched for hours without success before calling in the search and rescue team. Within 20 minutes of deploying her canine, team Deputy Director Chris Moe-Herlick was led by her trailing dog, Kaiser, to the missing woman, who was in dire physical condition.

“A find like that, it’s not the dog,” Moe-Herlick said. “It’s not the field support. It’s not the handler. It’s the team.”

Commitment to the search and rescue team is life-changing.

It means drills and practices, classes, tests, and braving ticks and rattlesnakes in deep woods.

It means paying for your own equipment and springing for vast quantities of dog toys. For some, it means paying thousands of dollars in canine hip surgeries or titanium replacement teeth because you know your dog is worth it, because someday he may save a life.

“We might train 10 months without a callout,” Reid said. “But you get that one callout, and it ends like that, and it’s like, this is why we do it. For that one person.”