‘Heroes in our house’

3 paramedics from RC honored for their life-saving actions 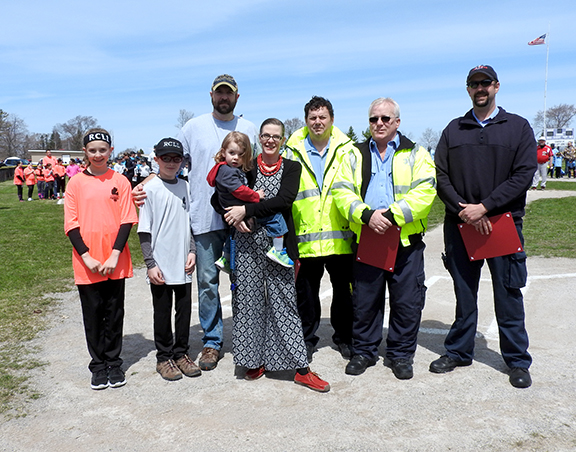 ROGERS CITY — It was fate that allowed a team of paramedics to intervene in an emergency call on March 7. That’s what Rogers City resident Sammantha Weathermon believes happened the day her son’s heart stopped and she had to meet the ambulance halfway for her son to receive life saving treatment.

Weathermon’s 2-year-old son Ruger was born with a congenital heart defect and had previously undergone two surgeries. Weathermon said the day was off to a good start and she was doing the laundry when Ruger started hitting his chest, saying “Mom har, har,” which is how he referred to his heart.

“I could just see the color change in his face,” she said, which is when she called 911 to send an ambulance. Because Weathermon lives about 18 miles outside of Rogers City, she put him in her truck so she could meet the ambulance halfway.

On the way, Weathermon said she began screaming out road names to the 911 dispatcher, so they could tell her when to pull over.

When she was told to pull over, she saw a man get out of a truck that arrived with the ambulance. It was paramedic Dan Leow, with the Rogers City Area Ambulance Authority, who was off-duty that day but decided to respond to the call as a first responder.

Weathermon said she ran toward him with her son, who was lifeless in her arms and handed him to Leow.

“I knew he was gone at that moment. He was completely cold,” she said.

Weathermon said Leow began asking questions to better understand his condition and then told her to hold Ruger’s legs harder than she’s ever held anything in her life.

“He grabbed what looked like a drill and told me, ‘I’m going to drill his leg,'” she said.

Leow began to perform an intraosseous infusion, which is an advanced technique used in emergency medicine that’s used to administer medicine directly into the bone marrow when a catheter cannot be established in a vein.

“They just went into action,” Weathermon said of Leow and his colleagues, Jim Fleury and Greg Main. “I’m kind of sitting back watching this trying to contact my husband and talking to (C.S. Mott Children’s Hospital) at the same time while watching them do all these things.”

Weathermon said they were trying to bring Ruger back and he was transported by ambulance to MidMichigan Medical Center-Alpena. From the hospital, Ruger was flown by helicopter to Mott Children’s Hospital in Ann Arbor, where he was rushed into emergency surgery.

“In the coming days, my son was on life support after he had an emergency surgery. His mitral valve had burst. That was the second mitral valve he had in 2019,” she said.

Weathermon said while Ruger was in the hospital, she began to think about the paramedics, and about Leow in particular. Weathermon said they were able to track him down and learned Leow was also a “heart dad.”

“I had no idea how close knit our lives were,” saying Leow also has a 2-year-old son and a daughter with congenital heart disease.

Staff at the hospital told her The American Heart Association has a “Heartsaver Hero Award,” and Weathermon said that the outreach specialist worked with her to make sure all of the paramedics qualified for the award. They did.

The group reunited for the first time after that harrowing day during the Rogers City Little League’s opening day ceremony on Saturday.

Weathermon, along with her husband, Levi, and her children, Kate, Remi, and Ruger, gathered at home plate to recognize and thank Leow, Fleurty and Main for their life-saving actions. Each paramedic was handed their own “Heartsaver Hero Award.”

Leow said every person in that ambulance did something that led to the positive outcome. He said Fleurty was the lead paramedic who was in charge of making decisions and delegating tasks and Main was the driver who got everyone in the ambulance to MidMichigan Medical Center-Alpena safely.

“It feels good to know the actions of the crew that day made such a positive impact on the family,” he said.

Both Leow and Fleurty said that watching Ruger running around on Saturday was the best reward they could have.

Weathermon said the paramedics are heroes in their house.

“I’m forever grateful to those men because those three men gave me a few more days with him,” she said.