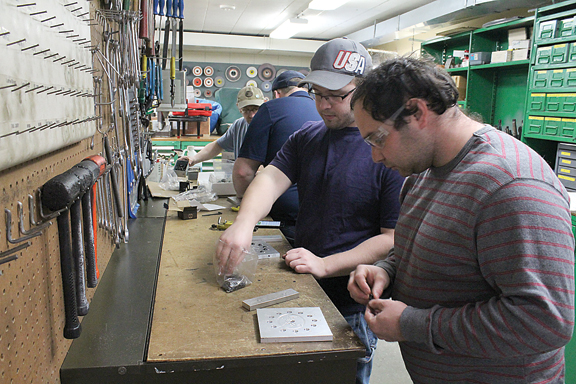 ALPENA — Not everyone takes a break in the spring. At least not the participants in the Alpena Community College Manufacturing boot camp.

The boot camp took place during the college’s spring break this week. The camp is a way for students and residents to learn important manufacturing skills.

During the week the participants spent about eight hours a day working on different skill sets. Stone said on Monday they learned about a 3D computer-aided design program, on Tuesday they worked on welding and more.

One of the program organizers, Sarah Burt, said the program is free and open to students and residents of the area. People have to be at least 18 years old and have a high school degree or equivalent.

There are other boot camps during Christmas break and summer break as well, she said.

“We also have wonderful instructors who take the time to help us out,” Burt said. “This is our fourth camp and the purpose is to really allow learning through hands on manufacturing skills.”

There were 13 attendees and help from four ACC instructors.

She said it helps open their eyes to manufacturing possibilities in the Alpena area. One of the activities they participate in include interviews with local companies. The companies then give the attendees feedback on their interviews.

“We’ve had several go through the camps and end up employed,” she said. “It helps them to use the boot camp as employability skills and to enhance resumes.”

Student, Ruben Maldonado, 27, a computer-aided machinist and welding student, said he learned about the boot camp in a class last year.

“I saw an opportunity and an advantage to be taken,” he said. “It’s helping me get a let up on my classes as well.”