‘Into the Night’ wins best feature at Sunrise 45 Film Festival 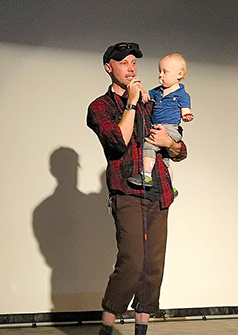 ALPENA — The 3rd Annual Sunrise 45 Film Festival in Alpena wrapped up Sunday evening with awards at the Black Sheep Pub.

Winning best feature film was “Into the Night,” written and directed by Kate Li, who also played the lead actress and edited and produced the film. J.D. Benjamin was an actor and producer, as well.

The pair is from Boston but lives in Los Angeles. They wanted to attend the Alpena festival to expose more audiences to their work and discover their reactions, Li said. Benjamin said they were impressed with what Alpena has to offer.

These awards were also presented: 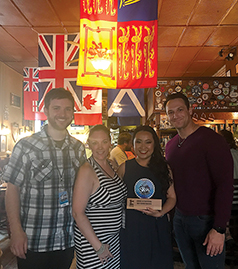 News Photos by Darby Hinkley “Into the Night” won best feature at the 2019 Sunrise 45 Film Festival in Alpena. From left to right are festival organizers Joe Rybarczyk and Krissy Kinney, director/writer/producer/editor/actress Kate Li holding the award, and actor/producer J.D. Benjamin.

This year’s festival was “scaled back” a bit, according to festival organizer Joe Rybarczyk. Only one venue was used this year, instead of multiple venues, as a cost-saving measure.

He is the founder and director of the Thunder Bay Film Society, which has partnered with Thunder Bay Arts and Alpena Civic Theatre to present the festival.

“The Civic Theatre has been amazing these last three years for us,” said Rybarczyk, who can be found onstage acting at ACT as well.

“When I started the film society, I wanted to bring independent films to Alpena and Northeast Michigan,” he said. “You know, that people wouldn’t normally get to see.”

Rybarczyk said more volunteers are always welcome to help out with upcoming festivals. To get involved, email nemicinema@gmail.com.

“This is the only way to see all these movies is to come to a festival like this,” said filmmaker Joel Potrykus, whose film “Relaxer” screened Saturday at Sunrise 45.

He said he’d like to see more promotion of festivals like this with high school and college students.

“The high schoolers need to get out to these,” Potrykus said. “Students would love to see all these weird movies.”

This film is about as relaxing as skiing naked down a mogul-laden mountain in the subzero dark of night.

It’s a bit like walking into someone else’s nightmare.

If you can stomach a ton of F-bombs, and you don’t mind gallons of projectile body fluids spraying all over intermittently, while a demented man-child attempts to defeat a video game in a repulsive apartment setting, “Relaxer” is for you.

If you can get past all that, you may appreciate a lone man’s struggle to persevere through a “challenge” his verbally abusive brother commanded him to complete, or he will end up homeless on the street.

It’s a unique survival story with strange and twisted ideas that come to life through some interesting camera angles and cinematography, and excellent sound-mixing with perfectly timed, evil-sounding classical music. And there’s just enough dark and dry (or perhaps wet?) humor to break up the uncomfortable tone of the entire film.

The underlying theme of this film is hope and determination, which I get. But I don’t understand why all the putrid filth is necessary to convey that message.

If someone had been filming my face while watching “Relaxer,” I’m sure it would say more than any words can possibly explain. A furrowed brow and downturned corners of my mouth would tell you that I’ve either just smelled sour milk or scooped the dog poop in my yard.

But filmmaker Joel Potrykus knows his films are not for everyone.

“A lot of people here are probably like, ‘What was that? Oh my gosh, that was awful,'” Potrykus opined at the Q&A after the screening. “I totally get that. It surpises me when anyone comes up and says, ‘I really liked that. That was great.’ But what you try to do as an artist, I think, is you’re looking for ‘your people.’ … But it’s very hard to find those people.”

He said he’s not trying to cast a wide net to make money. He’s just making art, and it may or may not appeal to the masses.

“Relaxer” was released in March 2018 at South by Southwest (SXSW) Festival in Austin, Texas. Having completed the festival circuit, the film is now available for purchase on YouTube, Amazon Prime and Google Play.

“It’s everything that I’m into,” Potrykus said of the film. “It’s funny, it’s crude, it’s dark, it’s a little bit violent, and it’s all set in a living room.”

The film has some well-known stars in it.

Joel Potrykus films in Michigan, because he wants to, even though tax incentives have diminished, and many filmmakers have chosen to film in states like Georgia.

He said “Relaxer” cost about $75,000 to make, and he sees no reason that any film should cost more than that. He said you have to get creative cutting costs, but it shows your skill when you are able to present high-quality work on a limited budget.

Potrykus and his partner, both in business and life, Ashley Young, had their son Solo just before the world premiere of “Relaxer.” Young is the producer of “Relaxer,” and Potrykus is the writer/director, and this is the fourth film they have worked on together.

Potrykus used to travel to about 100 film festivals each year, but he has scaled it back to about 20 this year.

He loves what he’s doing, and plans to continue to film in Michigan.

“You don’t see a lot of films being made in Michigan anymore, but we’re very passionate about staying here,” he said.

News Photos by Darby Hinkley “Into the Night” won best feature at the 2019 Sunrise 45 Film Festival in Alpena. From left to right are festival organizers Joe Rybarczyk and Krissy Kinney, director/writer/producer/editor/actress Kate Li holding the award, and actor/producer J.D. Benjamin. 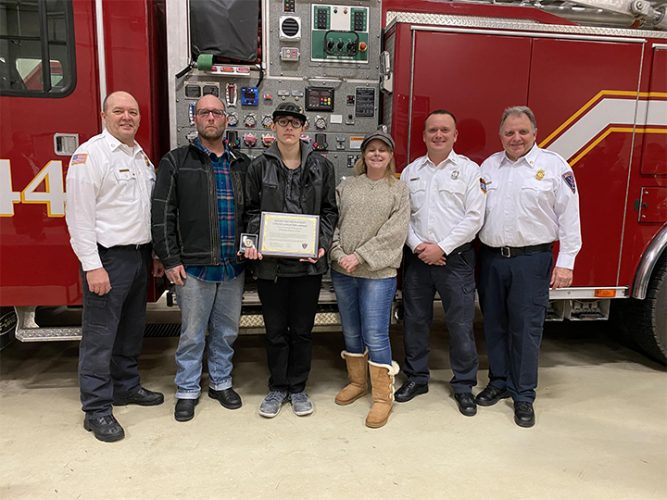 ALPENA — Celebrate Leap Day downtown by participating in Leap Year Local all day Saturday. This is a free, ...

In celebration of its 75-year anniversary, the Besser Foundation has announced plans to give the gift of education ...