“I was falling off. I was skipping class, I didn’t do no work, and I 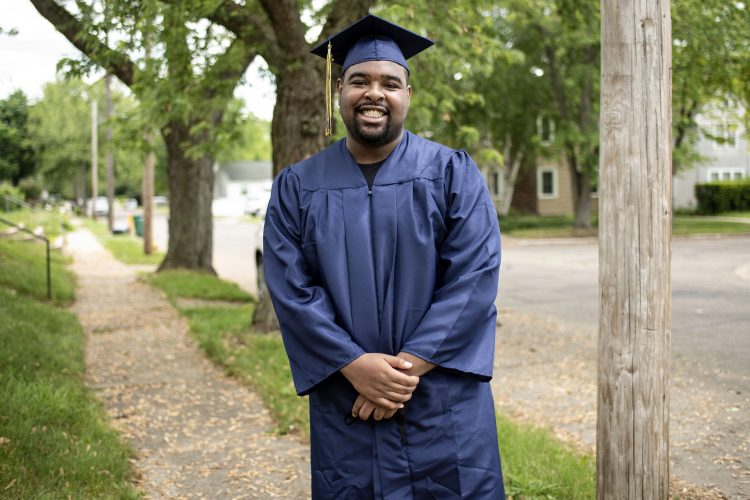 was just falling. I wasn’t even being a leader at the time,” he said.

But with the support of his mom, his teachers and his principal, Calvin Williams, Settles is a successful high school graduate with a vision for his future, the Battle Creek Enquirer reports.

Settles transferred to W.K. Kellogg from Battle Creek Central during the 2018-2019 school year–the same year he was supposed to graduate. He said he was behind on his credits and just wasn’t very serious about school.

Little by little, he started to care more about his schoolwork and take advantage of what he saw as a second chance. But then, in March of 2019, his dad died of a heart attack.

“It just hurt my soul because he was the only one who expected me to graduate, him and my mom,” Settles said.

He fell behind again and wasn’t able to graduate that year. His principal offered him another chance to get things right.

“He absolutely struggled when that happened,” Williams said. “So, I felt like I had to be that person, that adult who stepped in and said look, ‘I’m your dad right now. Let’s just pretend I’m your dad right now, and I will do whatever I can to make sure that you’re successful.'”

Settles realized it was time to get serious about his education.

“After my dad passed away…I was just thinking about what he would want– what’s best for me. All he would want is for me to graduate,” he said. “To be honest, that was my whole motivation. He made me from what I used to be. Back then, from now, if it wasn’t for him encouraging me and putting the pressure towards me, like making sure that I’m getting up every day. Calling and checking to make sure I’m doing right after school. He used to tell me, ‘When you going to graduate, son? I need you on that day, man.’ And I told him, I told him, ‘I’m going to graduate.'”

Williams said he took him under his wing and worked with his mom and teachers to push the young man toward graduation.

“I just worked with him and said, ‘You tell me what you want to do, and I will give you the tools to get there and show you how to use those tools. I will get you there,'” Williams said.

Settles dedicated himself to school and learned how to ask for help when he needed it.

“Sometimes, when you’ve got things going on with yourself, and you feel like you’ve got no one to talk to, but at the end of the day, like people still loved and supported me for what I did,” he said. “Not only just being at school, but for not giving up. Really trying hard to, you know, achieve my goals, and I did it. I graduated.”

During the last year, Settles said, he started focusing less on what his peers were doing and more on what he wanted to do and how he could be a leader.

“At first, I used to follow the crowd… but once I had my second chance, I really just took the time to stop playing around and really get to it,” he said. “Not only did I motivate myself, but I motivated others.”

Settles said everyone at W.K. Kellogg helped him believe that he could still graduate, but especially Williams.

“At the end of the day, I wouldn’t have made it if it wasn’t for him. Without his motivation, and without him constantly getting on me that I need to get this done, I need to keep going, don’t stop,” he said. “I appreciate Mr. Williams for everything he’s done for me.”

Williams said he couldn’t be more proud of what Settles has accomplished.

“I don’t have family here, so those kids and my staff, I consider my family,” Williams said. “It takes a village to raise a kid, and he really grew…His growth personally and as a student just grew amazingly fast over the last year.”

When Williams delivered Settles’ cap and gown, Settles said, the principal got emotional.

“To be honest, Mr. Williams cried, and I wasn’t expecting that,” Settles said.

Williams said he was overcome by how proud he was.

“It was so emotional, I had to get in the car… I lost it. I absolutely lost it,” Williams said. “He’s an amazing young man…When they get over that hump, and erase all those barriers and make it to the end line, it makes me feel like I’m a graduate as well, so I get equally excited.”