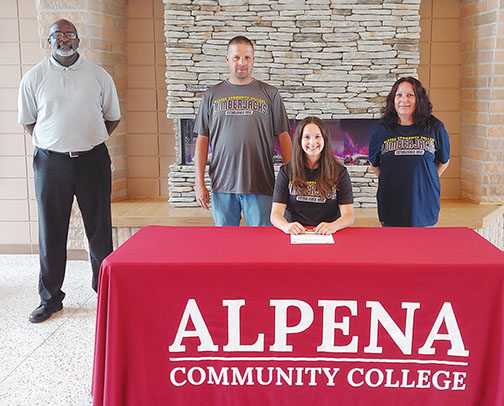 During their high school basketball careers, Jordan Kobielus and Morgan Mepham stood out for their versatility and willingness to wear many hats to help their teams.

Now both of them will get a chance to show off their versatility at the next level.

Dreams came true for Kobielus and Mepham on Wednesday as they became the newest members of the Alpena Community College women’s basketball program after signing their letters of intent.

ACC coach Bobby Allen said both Mepham and Kobielus will have to adjust to the physical style of play in ACC’s conference, but knows both players are willing to work hard. 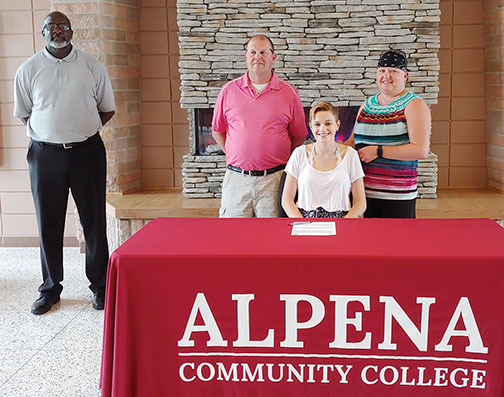 “The two young ladies that are coming in–Jordan and Morgan–I think they’ll bring (a commitment to) hard work. I don’t look at the wins and losses, it’s the hard work that they bring,” Allen said. “I think they’re happy to be there and they’re going to surprise a lot of people.”

Kobielus, an Atlanta High graduate, joins the Lumberjacks after a five-year varsity career for the Huskies. She was immediately called upon to contribute as a varsity eighth grader and became an indispensible part of Atlanta’s program during her career.

Kobielus, who plans to pursue nursing studies, was consistently one of Atlanta’s leaders in points, rebounds and assists and was also a defensive leader. She said being asked to play multiple positions–sometimes within the same game–made her a better all-around player.

“I enjoyed it because it really turned me into a more versatile player because I would go from playing point guard to center multiple times a quarter, so it was trying to make sure I was keeping my team involved,” Kobielus said. “Seeing my progression as a player from then until my senior year and seeing how far my team has progressed, being able to help the underclassmen, being able to help the junior high program and being able to help get the next generation ready was really fun.”

Kobielus attended several of ACC’s home games at Park Arena last season and was excited by the family atmosphere she saw among the Lumberjacks. Now she’ll get to be a part of that atmosphere and is ready to contribute.

“Last year I came to quite a few of the games and you can see how the girls are,” Kobielus said. “No matter who’s out there they’re talking, having fun, cheering each other on, not to mention it’s close to home.”

Mepham was a do-it-all type of player for Charlton Heston Academy in St. Helen and said it’s always been a dream of hers to play at the next level.

Charlton Heston’s athletics program is only six years old and the girls basketball program has only been in existence for a few seasons. Despite winning five games last season, the Patriots played in a district game for the first time and Mepham was an important piece of the puzzle, playing all over the floor.

Mepham, who will study fine arts, transferred from Roscommon to Charlton Heston during her high school career and said the transfer gave her a needed push before Allen contacted her.

“It really has (been a dream of mine), but I never really got the (boost) I needed until I transferred schools and then Bobby contacted me, so it was really exciting,” Mepham said.

Allen often recruits players who can play multiple positions and expects that Mepham and Kobielus will do the same. ACC’s lineups routinely see forwards bringing the ball up the floor or guards playing underneath the basket, if the situation calls for it. Such was the case last year when the Lumberjacks soldiered through the season despite a rash of injuries that often left them with six or seven players dressed for a game.

“You’ve got to put the players in position to be successful,” Allen said. “Sometimes you’ve got to play out of position.”