For Kennedy Kaiser, there was never any doubt.

The first time she visited the Delta College campus, the recent Alpena High graduate knew it was the perfect spot to continue her education and her soccer career.

As it turns out, Kaiser’s teammates felt right at home too.

A quartet of former Wildcats–Kaiser, Anna Young, Edie Zann and Macy Dickinson–will trade one green and white uniform for another by joining Delta’s women’s soccer program in the fall.

Young, Zann and Kaiser originally announced their intentions to join Delta during Alpena’s National Signing Day event in February and Dickinson will join the Pioneers as a walk-on. 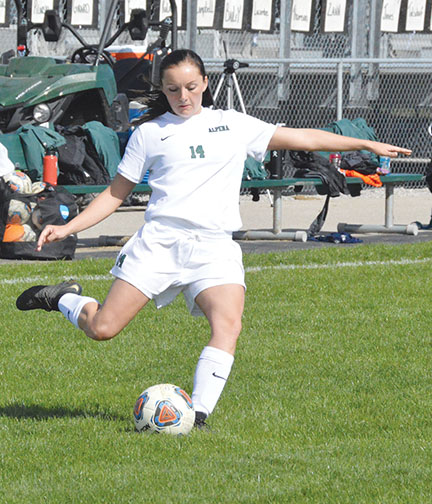 News File Photo Macy Dickinson will also join the Pioneers as a walk-on. All four helped raise Alpena’s level of competitiveness and will join a Delta program that’s gone 32-4 in the last two seasons with two national runner-up finishes.

After forging strong friendships and developing on-field chemistry with one another for several years, the quartet is excited to continue playing together at the next level.

“I’m excited to be able to continue living out our love for the game with some of my close teammates. Anna and I have always had good chemistry on the field. We know where each other are at without looking because of how long we’ve played together,” Kaiser said. “I’m excited to see how we grow as players to a more competitive level and different coaching style.”

Two years ago, Kaiser was contemplating her future and trying to figure out a way to further her soccer career. After a downstate tournament, she talked with one of Delta’s coaches, who encouraged her to visit the campus in University Center. Despite it being her first college visit, Kaiser was immediately drawn to the campus offerings and atmosphere.

During a second visit, Zann, Young and other Alpena players accompanied Kaiser and fell in love with the campus the same way she did.

“Coach (Damon) Amey was incredible and we instantly felt like we were part of the team,” Zann said. “It became a pretty easy decision for all of us.”

All four have been instrumental in helping raise Alpena’s competitive profile and will look to do so for a Delta program that’s fast becoming one of the nation’s best junior college programs.

In the last two seasons, Delta has gone 32-4 with a pair of runner-up finishes in the National Junior College Athletic Association Division III championship game.

In 2018, the Pioneers fell to top-ranked Richland College in the title game, 1-0. Last season, they lost to Brookhaven College 2-0 in the title game, but picked up their first MCCAA and regular season regional tournament title along the way.

“Delta has had major success at the national level, being runners up at nationals the past two years,” Young said. “It’s a great opportunity for us to play competitive soccer close to home while we focus on our schooling.”

In turn, Amey is getting a quartet of talented players from northern Michigan, which has become a prime recruiting area for the Pioneers. Last season’s roster included four players from Cadillac and another from Tawas and Amey said the region has been a gold mine for finding talent.

“A few years back, we decided hit northern Michigan (in recruiting). There are a ton of kids who get overlooked up there,” Amey said. “I’ve known (Alpena coach Tim) Storch for quite a while now…he’s got a good eye for talent. I fell in love with the way they (Alpena’s players) play and I think they can fit into the program really well.”

Zann was a star keeper for Alpena and finished her career with a school-record six and a half shutouts. She finished with a 2.54 goals-against average in 28 games and impressed Storch with her athleticism and growth as a player.

“I have a special place in my heart for Edie. She came out as a freshman and fell in love with the sport,” Storch said. “She’s got great size, strength and agility and you combine those things with the hand-eye coordination she gets from volleyball and she’s got a sense of bravery about her.”

Young and Kaiser have been Alpena’s go-to scorers for the last several years and are counting on that chemistry to be successful at the next level.

“I’m excited to have them there and watch everyone grow,” Young said. “Kennedy and I have been playing together since fifth grade and we have a special way of connecting and reading what the other person will do.”

Young, who was recently named Alpena High’s Female Athlete of the Year, graduated as Alpena’s all-time leader in goals (37) and points (57). She also holds the single-season records for goals (16), assists (12) and points (28).

She plans to study exercise science at Delta.

“She’s competitive and she’s got a nose for the goal. It’s pretty much what you want from an attacking player,” Storch said of Young. “The thing that makes her special is her separation ability and how she can get by the last defender.”

Kaiser, who assisted on many of Young’s goals, finished with 39 career points and a school-record 22 assists.

She plans to pursue nursing studies.

“Kennedy Kaiser is a sparkplug. People in sports make the mistake of judging people by their size,” Storch said. “She’s the perfect example of someone who made a career out of making her size an advantage.”

Dickinson, a former Alpena team captain, finished her career with four goals and four assists. She made her mark however as one of Alpena’s best defenders, playing with confidence and using her athleticism against opponents’ best scorers.

“She’s a very, very talented leader,” Storch said of Dickinson. “She’s very composed as a central defender and she’ll be a great player at the next level.”

Amid COVID-19 concerns, all four Alpena players have been doing whatever they can to stay in shape and prepare for the rigors of the next level. The Michigan High School Athletic Association suspended all sports activities in mid March and then announced the cancelation of spring sports seasons in early April.

Kaiser has stayed active by swimming, walking and running and has also tried to eat healthier. Young and Zann have gone for runs as well, but they’ve also stayed sharp by playing their respective positions in shootouts.

“It’s a bummer for all athletes right now. I’ve been working out at home and running outside when it’s nice. Anna and my family have been shooting on me so that’s also nice,” Zann said. “This is all new to everybody but I think a routine helps.”

News File Photo Macy Dickinson will also join the Pioneers as a walk-on. All four helped raise Alpena’s level of competitiveness and will join a Delta program that’s gone 32-4 in the last two seasons with two national runner-up finishes.