Hillman’s best effort not quite enough in loss to Owls 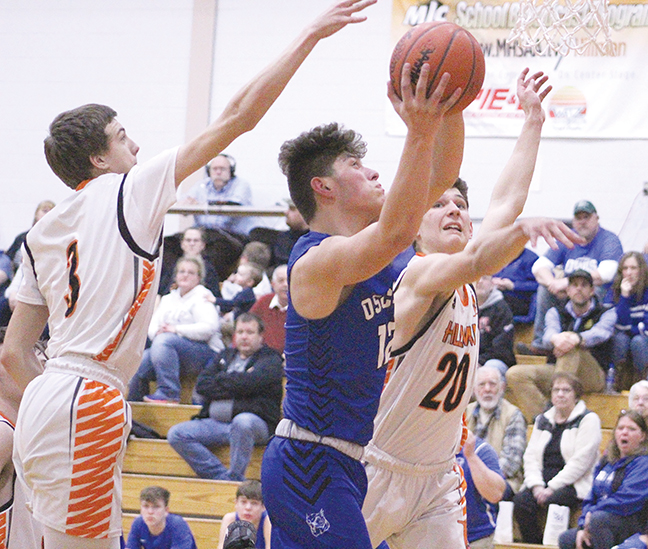 News Photo by Jonny Zawacki Oscoda’s Gavin Lueck (12) goes up to the hoop between Hillman defenders Caleb Hively (3) and Isaac Morrison (20) during the third quarter of a boys basketball game on Thursday at Hillman High School.

Hillman’s head coach wasn’t pleased with his team’s effort in a loss earlier in the week and the Tigers welcomed an Oscoda team they lost to by 46 points just over two weeks ago.

Muszynski challenged his Hillman team to put together a better effort this time around.

The Tigers embraced that challenge and put together their best effort of the season. Despite a huge improvement, their best effort still wasn’t quite enough to upset the No. 8 ranked team in Division 3 as the Owls spoiled Hillman’s Senior Night and finished a 19-1 regular season on a winning note in a 62-50 win.

“We played Tawas on Tuesday and I thought we played pretty poor so I challenged the guys a little bit after that game and I was very impressed with the way they responded here today,” Muszynski said. “We had a running clock when we were on the road against Oscoda last time we played and today, I thought early on we got down, but kept chipping away all game long. We didn’t let it get out of hand and that’s one thing I was really impressed with, mostly the effort and you saw some things today that we have done better than we have all year.”

It was no secret coming into Thursday’s game that Oscoda was going to score, the question was, would the Tigers be able to keep pace with the Owls to make the game respectable?

The Owls closed the first quarter scoring 10 of the final 13 points to take a 21-12 lead after one.

Oscoda hit six threes in the first half and built a 31-13 lead two minutes into the second quarter to force a Hillman timeout.

The second quarter proved to be the difference in the contest as the Tigers had trouble matching the Owls for an eight minute stretch and Oscoda took a 41-19 lead at the break when Austin Schlink collected a rebound and beat the halftime buzzer with a layup.

“We did shoot the ball better than we have all year and a lot of that had to do with us kind of attacking the rim a little more, dribble penetrating and kicking it to guys and having Oscoda a little on their heels on our drive,” Muszynski said. “I thought we adapted really well in the second half. We gave up six threes in the first and second half cut that in half. We extended our defense a little bit, we hovered the line a little more than we needed to and we mixed and matched a lot tonight. We threw a lot of different half court defenses at these guys and the guys responded well. A varsity ball club should be able to do that, but sometimes you’d think with our record we’re not able to adapt and change things up, but today we did.”

Hillman made adjustments and opened the second half on a 12-3 run that included a pair of triples from Sean Henigan as the Tigers cut the lead to 44-31 less than four minutes in and forced an Oscoda timeout.

Like good teams do, the Owls responded, scoring eight unanswered points and regained their comfortable lead by taking a 52-33 lead into the fourth quarter.

Despite trailing 59-36 with five minutes to play, Hillman refused to quit and let the game get out of hand on its home court. The Tigers scored 14 of the game’s final 17 points before Oscoda burned the final minute and a half off the clock.

“We threw everything that we had at them tonight and that’s what you have to do against a good team like that. Hats off to the boys, the effort was great and we have played tough at times and today was an extension of what we’ve seen at times this year,” Muszynski said. “The biggest key was that we shared the wealth today. We haven’t generated a lot of assists and that’s one thing we’ve lacked this year along with shooting the ball, but tonight I thought with our ball movement and sharing the ball the way we did, we’re getting more into the second and third options instead of settling. I’ve noticed the evolution of our offense over the last two weeks and that’s going to help us going into to districts. I told the guys that tonight is one of the proudest moments I’ve had as a coach. I’m really proud of our effort and tonight was great for the morale of our team.”

A big part of Hillman’s strong second half was the play of Isaac Morrison, who scored 11 of his team-high 15 points for the Tigers in the second half. Henigan finished with 14 points and hit four threes in the game and Gunner Mellingen added 11 points.

Gabe Kellstrom chipped in with 12 points for Oscoda and Brayden Mallak scored 11 points as both teams had three players each that finished in double figures.

Oscoda begins postseason play on Monday when the Owls play Roscommon in their district opener at Johannesburg-Lewiston.

Hillman will have one more regular season test Saturday when the Tigers travel to Cedarville before they await the winner of Onaway and Wolverine in Wednesday’s district semifinal game at Onaway.