Round 3 goes to Posen 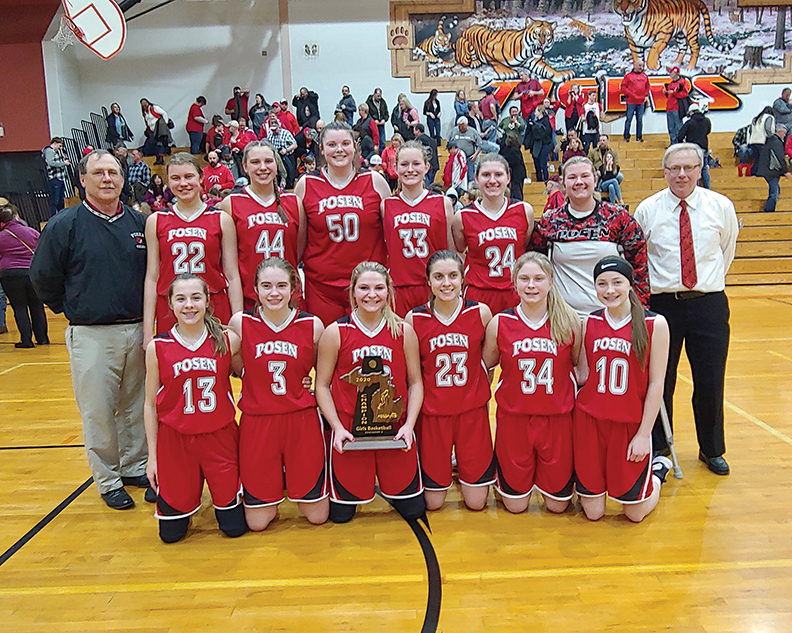 HILLMAN–All the time put in and hard work paid off big for the Posen girls basketball team on Friday.

Riley Krajniak scored 13 points and Makayla Kamyszek and Lizzy Romel added 11 and 10 respectively as the Vikings held off a late charge from Hillman to win 47-43 in a Division 4 district final in Hillman.

The win gives the Vikings their first district title since 2016 and advances them to a regional semifinal matchup against St. Ignace on Tuesday in Pellston.

After two exciting, well-played regular season games between the two North Star League Little Dipper co-champions, it seemed only fitting that the rubber match go down to the wire as well.

Posen (17-5) led by as many as 13 in the third quarter, but the Tigers clawed their way back into the contest in the waning moments of the game. Hillman (15-6) cut the lead to four with 2:11 left after Melanie Morrison converted a steal and the Tigers got to within three three different times in the final 1:25.

“It feels great. We’ve won them before, but it’s been four years since we won one,” Posen coach Karl Momrik said. “We had to keep our focus and we made some mistakes, but we held the ball and played well when we needed to and made a couple free throws at the end that gave us the margin of error to win.

After playing aggressive defense and getting contributions throughout their lineup to win on Wednesday, the Tigers nearly did the same thing again in their quest to win a third district title in four years. Hillman struggled early offensively, but wasn’t afraid to play aggressive defense and forced numerous turnovers. But those turnovers didn’t always translate to points on the other end and the Tigers were left with more than a handful of missed opportunities.

“In the second half, we had a much better performance than our first half. Our deficit was huge, our shots just weren’t falling. We had percentages that just aren’t normal for us; we normally make a few more shots than we did and it’s a little frustrating,” Hillman coach Jenny Taratuta said. “But we clawed back and for that I’m proud of them. We didn’t give in, we were showing our perserverence and tough games get lost. That was a tough loss. Posen’s a great team. We’ve scrapped with them. They never give in, they never stop pressuring, but neither did Hillman.”

Morrison’s bucket with 2:11 remaining made it 41-37 and Hillman got to within three less than a minute later when Bailey Schook turned a pass from Allyson Brown into a three-point play. The two teams traded free throws and Hillman trailed 44-41 with 1:02 left before Lizzy Romel scored to push Hillman’s lead to five.

Hillman got it to within three again with a bucket from the wing by Julia Taratuta with 37 seconds to play, but it proved to be as close as the Tigers could get.

Morrison led Hillman with 15 points, Schook had 14 and Davi Stewart had five.

Romel, a sophomore, had a standout performance for Posen on both ends of the floor particularly in the second half. All of her points came in the second half and the buckets came right underneath the basket, usually when she was wide open for shots after catching outlet passes.

“Lizzy Romel played outstanding tonight. Lizzy’s not known to be much of a scorer and she had to make a bunch of bunnies tonight,” Momrik said. “She did a great job and she did such an outstanding job (defensively) on Bailey Schook, one of the best players in the area.”

Behind tough defense and good rebounding, Posen jumped out to a 14-6 lead after one quarter, while Hillman ran into some bad luck offensively. Posen upped its lead to 27-15 at halftime, thanks in part to a pair of three-pointers from Krajniak, which gave the Vikings some cushion.

Hillman fell behind 32-19 with 5:14 left in the third quarter, but a basket from Jessica Jones helped kickstart a 12-3 run that pulled Hillman to within two with a minute left in the period. Much like they did Wednesday, the Tigers got contributions from all over. Schook bulldozed her way through three defenders for a bucket; Brown scored on a putback; Morrison and Stewart knocked down treys.

But Posen always managed to stay one step ahead and Romel scored again to give Posen a 35-31 lead after three quarters. Posen pushed the lead out to seven midway through the fourth quarter before Hillman made its last run.

“We got within four, got within three (and we were) always right there and then we gave up an easy shot. It’s just things that you learn,” Taratuta said.

Despite the loss, the future appears bright in Hillman and Taratuta will have an experienced roster to work with next season as Hillman graduates just two seniors from this year’s team.

“I have all but two coming back next year hopefully and we’ll be stronger than ever; that’s the hope of building a team,” Taratuta said. “There’s potential in every single one of those girls.”