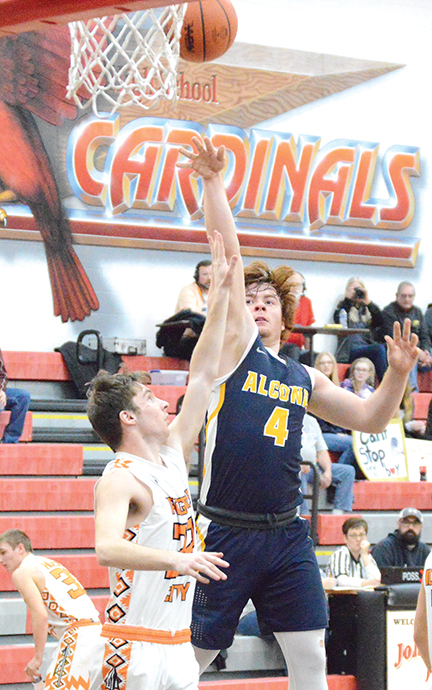 Playing Traverse City Central for the third time this season–and second time in four days–the Wildcats couldn’t break into the win column and lost to the Trojans 61-48 in a Division 1 district quarterfinal.

“The difference was the second quarter, both offensively and defensively. They hit a few shots on us, got to the free throw line and we really struggled offensively,” Alpena coach John Pintar said. “We had a lot of turnovers in that quarter.”

Alpena outscored Central 32-25 in the second half, but the first half deficit proved to be too much to overcome.

“In the second half we played really well. The effort was what it should have been the whole game,” Pintar said. “We really struggle against them. They’re a big, athletic team and they’re a tough matchup for us.”

The loss ends and up-and-down season that saw the Wildcats play some of their best basketball late in the season. During one three-game stretch, Alpena lost three games by a combined four points and Pintar praised his team’s competitiveness during the year.

“I was really pleased all things considered. There was a lot of uncertainly given (the players we graduated), but we had five seniors who started for us and did a great job. I thought we had a real nice rotation,” Pintar said. “The guys did a great job competing.”

J.D. Ellenberger banked in a three-pointer with no time left and the Hurons rallied past Alcona 53-50 to win a Division 3 district quarterfinal at Johannesburg-Lewiston.

Rogers City (12-9) advances to play Whittemore-Prescott in a semifinal on Wednesday.

The Hurons trailed by two, 50-48, with 38 seconds left but were able to score to tie it. Rogers City then stole the ball and drew up a pick-and-roll play to go for the win.

It paid off big as Ellenberger scored the last of his game-high 18 points at the right time.

“The last 38 seconds was some of the best basketball we’ve played all year,” Rogers City coach Matt Ponik said. “Alcona played a heck of a game and we did enough to win.”

Alcona (9-12) did everything it could to win and outrebounded the Hurons all night. But Alcona couldn’t hold off the Hurons at the end.

The Tigers trailed 18-13 after one quarter, 28-25 at halftime and 37-36 after three quarters and had outscored Rogers City 14-13 in the final quarter before Ellenberger’s shot.

Dominic Howe led Alcona with 13 points and Aiden Wrobel had 12.

ONAWAY–A dominant second quarter paved the way to victory for the Onaway boys basketball team on Monday as the Cardinals topped Wolverine 69-56 in a Division 4 district quarterfinal in Onaway.

Jager Mix scored 24 points and Kevin Pearson added 21 for the Cardinals (5-16), who outscored Wolverine 30-20 in the second quarter and pulled away down the stretch.

Onaway advances to play Hillman in a district semifinal on Wednesday.

Onaway started the game on a 12-0 run, but Wolverine responded and took a seven-point lead later in the game before the Cardinals took over for good.

“A lot of that (second quarter offense) came from our defense. We stepped it up defensively and forced turnovers,” Onaway coach Eddy Szymoniak said. “We changed up our defense and I thought some guys stepped up big.”

HALE–Another monster night from Joe Kimmerer has the Hale boys basketball team moving on in the district tournament.

Kimmerer dropped 50 points on Fairview and added 23 rebounds, five assists and two blocks as the Eagles ran by Fairview 79-27 in a Division 4 district quarterfinal on Monday.

Hale led 26-7 after one quarter and cruised from there.