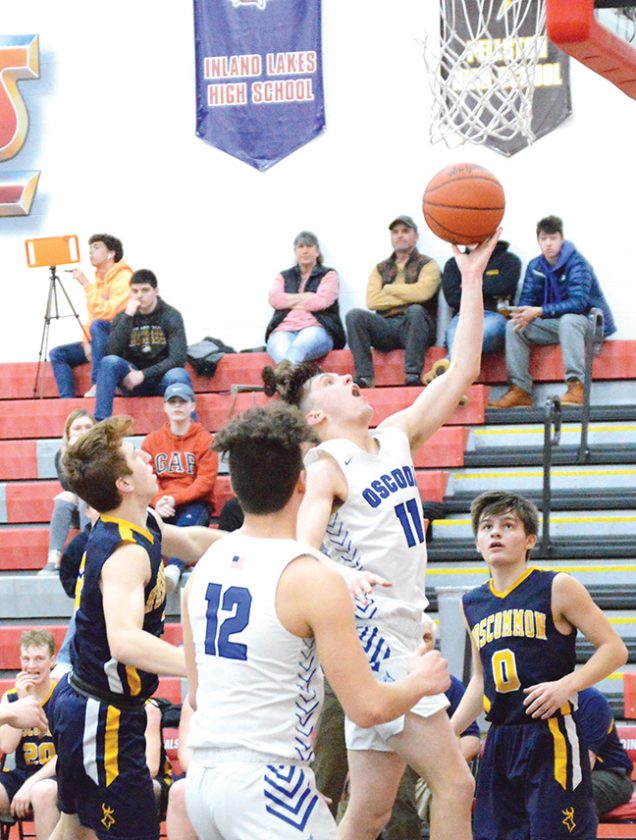 JOHANNESBURG–The Oscoda boys basketball team started the postseason off on a dominant note.

Brayden Mallak scored 21 points and Owen Franklin added 15 as the Owls rolled past Roscommon 74-39 during a Division 3 district quarterfinal at Johannesburg-Lewiston on Monday.

The win advances the Owls (20-1) to a district semifinal matchup with the host Cardinals on Wednesday.

After a run to the regional final last season and a 17-0 start to this year, the Owls have been waiting for playoff basketball for a long time. They showed that hunger on Monday, holding off a late second quarter run to blow by the Bucks in the third quarter in a game where every Oscoda player saw time on the floor and 11 different Owls scored.

“We’ve been ready. The last couple weeks of the season were tough for us and a struggle to stay motivated. We just wanted to get the playoffs so bad,” Oscoda coach Mike Poland said. “We broke the ice tonight and they’re excited; they’re ready to go.”

Behind the talents of Franklin and Mallak–who combined for 21 of Oscoda’s first 25 points–the Owls build a 25-8 lead. Oscoda’s defensive pressure proved too much for the Bucks early on and on the offensive end Oscoda didn’t miss much.

The Bucks canned three three-pointers in a span of about 1:20 to cut the lead to eight shortly before halftime, but Oscoda still went into the break with a comfortable 30-17 lead.

Oscoda routed the Bucks in a district semifinal last year, thanks largely to a stellar first half where they took a 30-2 halftime lead and hounded Roscommon on both ends of the floor.

The Owls had a similar effort in the third quarter of Monday’s quarterfinal, outscoring the Bucks 22-6 while forcing turnovers and bad shots. Between the offensive efforts of Mallak, Franklin, Devin Thomas and Gavin Lueck among others, there wasn’t much Roscommon to slow Oscoda’s offensive roll.

“We did pretty well. We’ve got some thing we need to fix, but we’re trying to be the best version of us. I was happy with how we came out and played. We played really well in stretches,” Poland said.

With a 52-23 lead after three quarters, Poland gradually emptied his bench and several of Oscoda’s reserves came through with surprising buckets, much to the delight of Poland, Oscoda’s players and the Oscoda fans.

With a little more than three minutes remaining, Itsuto Mantani dribbled into the lane and was able to convert a shot attempt as he ran into a defender; Austin Schlink canned a triple with 1:30 left and Brendan Apsitis, Lewis Axline and Michael Wrona each scored in the final 40 seconds of the contest.

“It was exciting. We brought some JV kids up, put the second group in there at the end,” Poland said. “I thought they came out and had a nice experience. I think three of them at least had baskets and that’s something they’re going to have (to remember) for a long time.”