A tough pill to swallow 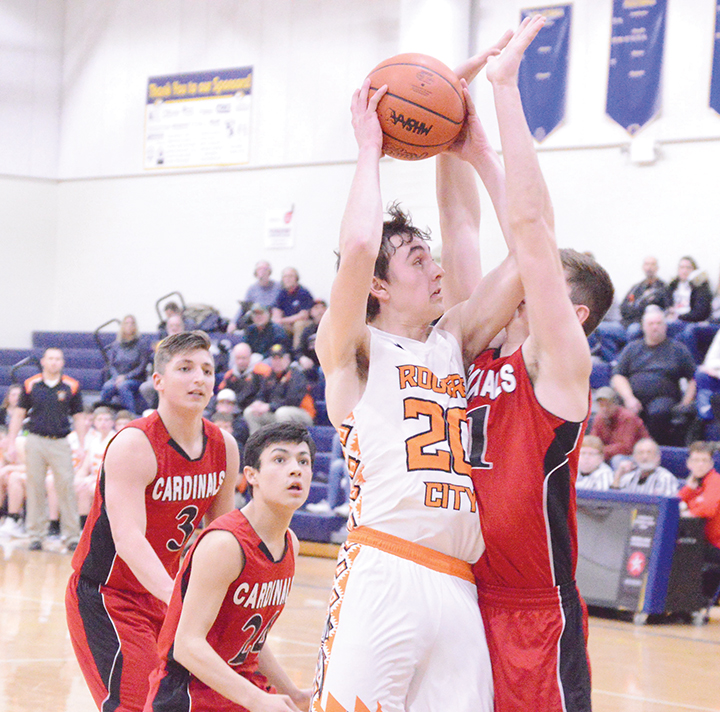 J.D. Ellenberger felt like he was on top of the world last Monday.

The Rogers City senior had every reason to be after he banked in a three-pointer as time expired to lift the Hurons over Alcona 53-50 in a district playoff game.

“I’ve always dreamed about it and I’ve thought about it, but I’ve never hit a game-winning shot in my life,” he said.

That shot marked one of the happiest and biggest moments of Ellenberger’s career, but it might turn out to be the last shot he ever takes as a Rogers City Huron.

In the wake of concerns about the spread of coronavirus, the Michigan High School Athletic Assocation (MHSAA) announced Thursday the immediate and indefinite suspension of all winter postseason tournaments. 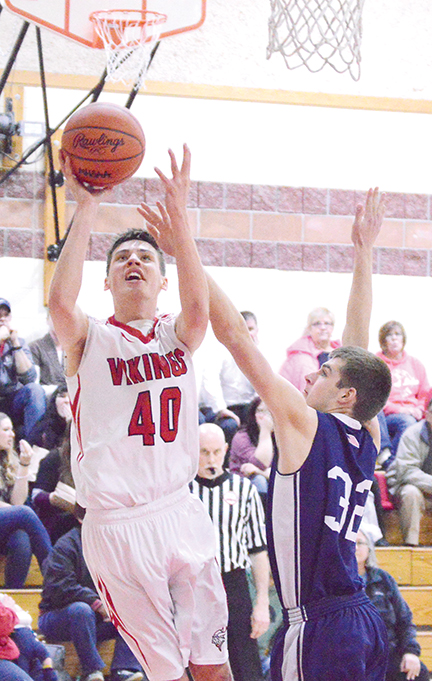 News File Photo Posen forward Eyan Hincka (40) drives the baseline during a home game against Hale in February. Both Ellenberger and Hincka are among many local seniors who are hopeful they’ll get to finish their seasons at some point this year. The Michigan High School Athletic Association suspended all winter postseason tournaments on Thursday and suspended activities for all sports on Friday through April 5.

The MHSAA subsequently suspended all athletic activities for sports in all seasons until at least April 5 in a Friday announcement. That decision came less than 24 hours after Gov. Gretchen Whitmer ordered that all K-12 schools close for the next three weeks to deter the spread of coronavirus.

The decision to suspend winter tournaments, has left hundreds of high school athletes around Michigan in shock and hoping they get another chance to play this year. For Ellenberger and other Northeast Michigan seniors, the news hit much harder.

For players who have played basketball for years and dreamed of leading their schools to postseason glory, the sudden suspension and the reality that their careers might be over is a tough pill to swallow. It’s left many of them shocked, angry, disappointed and wondering what comes next.

“It was a complete and total bummer,” Ellenberger said. “It’s hard to explain. I’ve known basketball my entire life and we worked all season for this opportunity.”

‘I DIDN’T WANT TO BELIEVE IT’

In Northeast Michigan, the stage was set for some epic district championship matchups on Friday night.

∫ Posen vs. Onaway; a meeting of two Presque Isle County rivals in what would have almost certainly been a physical, down-to-the-wire game.

∫ Hale vs. Mio; a rematch from mid-February where the Eagles edged the Thunderbolts in overtime.

But in the wake of national postponement and cancellations on Wednesday, it didn’t take long for rumors to swirl that high school games might be next. Rogers City coach Matt Ponik was told ahead of the Hurons’ game with Whittemore-Prescott on Wednesday by Johannesburg-Lewiston athletic director Joe Smokevitch that Friday’s game would be played with limited attendance.

By Thursday morning at 10 a.m., the MHSAA had confirmed just that–announcing postseason games through the weekend would be played with restricted attendance–50 people per team including players, coaches, parents, guardians and essential school personnel. Hosting schools were to provide an entry list of attendees ahead of a contest and MHSAA-credentialed media were permitted to attend games.

That announcement was met with some disappointment. Many players feed off crowd emotion and those matchups would’ve almost certainly meant packed gyms full of enthusiastic fans. But it also meant the games were still on.

“I didn’t like that (not playing in front of fans), but our kids play so hard that I wasn’t worried about the game,” Posen coach Chris Keller said.

It took just four hours for that to change.

Keller was in a meeting when his phone started erupting with texts and calls.

Ellenberger was in the Rogers City gym, checking through apps on his phone, when he got a text from Ponik telling him not to dress for practice.

Wherever they were and however they found out, the message to administrators, coaches and players was the same: the MHSAA had suspended the postseason.

On Thursday alone, the NCAA announced the cancellation of its postseason basketball tournaments, the National Hockey League announced the suspension of its season and Major League baseball pushed back the start of the 2020 season.

The news sent shockwaves through the state and athletes–especially seniors–were left to process the sudden and shocking news.

“I was shell-shocked. I figured they would just try to postpone it. It wouldn’t have been that upsetting,” Posen senior Cameron Paull said. “I didn’t want to believe it. You only get the experience (of playing in high school) one time.”

For coaches that meant having some tough conversations and trying to find something, anything to say that put things in perspective.

“Having to them Thursday, it was tough to see the look in their eyes,” Ponik said. “We’re in uncharted territory right now and it’s totally understandable because we don’t know the extent of what it (the virus) can do right now.”

“But for a kid at that age, it feels like the end of the world.”

‘THIS WAS OUR TIME’

Since they began playing together in the third grade, Posen’s seniors have dreamed about winning titles wearing Posen’s red and white.

“It’s been something within our group since we started in third grade, we’ve been very competitive,” senior Eyan Hincka said. “We never wanted to lose.”

The group made good on its goal last year, winning Posen’s first district championship since 2012, but players were anxious to do it again. The hunger for more district gold began during summer ball and carried over to football season where the Vikings earned a playoff spot.

Posen’s hunger and solid team chemistry continued into basketball season. The Vikings earned a share of the North Star League’s Dipper division championship and earned a berth in the district final after throttling Wolverine on Wednesday.

“We worked our butts off all summer long. We were starting (games) together and after last season this was our time to shine,” Paull said. “This was our time. We worked real hard for it.”

That feeling permeated other local programs, who had dreams of postseason gold after building momentum early last week.

Onaway, which won just four games during the regular season, was riding high after winning two district games and was aiming for the program’s third ever district championship. Rogers City was in a similar spot after winning two district games and was looking forward to a rematch with the Owls, especially after a February rout when the Hurons’ roster was gutted due to illness.

In Oscoda, the Owls were raring to go after breaking an 18-year district title drought and advancing to the regional finals last season. The Owls returned most of their players from that team and made no secret of their desire for another postseason run.

For Oscoda’s seniors, including Brayden Mallak, Devin Thomas and Gabe Kellstrom, the abrupt suspension of the season could mean the end of careers in which they helped change the expectations for Oscoda’s program.

‘NONE OF US WANT TO GIVE UP’

Though the MHSAA has yet to make a final decision on the fate of the basketball season, many players haven’t given up hope of playing again, even if chances appear slim right now.

On the heels of Thursday’s news, Keller gathered his players in the gym, told them what was going on and gave his players the option of practicing.

For the seniors, there was never any doubt what the Vikings were going to do.

“My seniors stood up and said, ‘We’re practicing,'” Keller said. “We had one of our hardest practices of the year. That spoke about how hard they’ve worked. These guys hate losing, even to each other.”

Keller expected nothing less. The fourth-year coach has a special place in his heart for this particular group of players because they’ve been in the program for the entirety of his tenure.

“It was a great practice. With everything that was going on, I think it pushed us to work harder,” Hincka said. “We’ll look back on how we progressed as a team, but I believe we could have made it to the Breslin Center.”

Regardless of what happens with the remainder of the winter season and the spring season, athletes will be doing whatever they can to stay in shape with hopes of playing again. For some that means shooting hoops or playing catch. For others, it means doing weight training and conditioning exercises at home. Many coaches have reached out on social media to their respective teams, offering tips on staying in shape during the state’s three-week athletic hiatus.

During team meetings on Thursday, coaches tried to stay positive and spoke of how this time in their players’ lives was a blip on the radar, a time in life when something happened beyond their control. They also stressed how even though players were hurt and disappointed, it wouldn’t take away from their individual accomplishments or team accolades.

While those life lessons might resonate better one day, right now it’s hard for the seniors not to feel the sting of having the fruits of their hard work and opportunities to play snatched away so abruptly.

“None of us want to give up, even as of now. It’s still playoff time regardless,” Paull said. “It means everything (to play for Posen). I love the team, I love the program and we’re a family. I wouldn’t trade (my teammates) for anything.”

News File Photo Posen forward Eyan Hincka (40) drives the baseline during a home game against Hale in February. Both Ellenberger and Hincka are among many local seniors who are hopeful they’ll get to finish their seasons at some point this year. The Michigan High School Athletic Association suspended all winter postseason tournaments on Thursday and suspended activities for all sports on Friday through April 5.