Their best effort yet 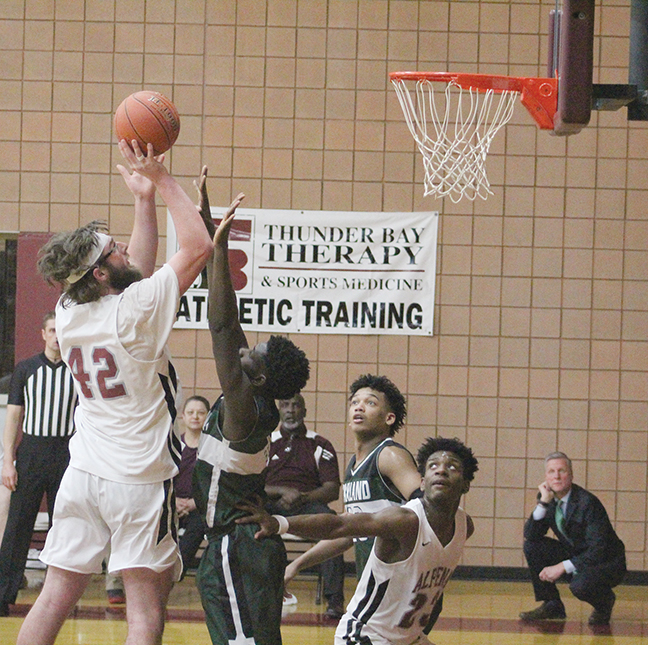 The Lumberjacks put forth their best effort of the season on Wednesday and their efforts were rewarded as Alpena defeated Oakland Community College by a final score of 80-68 at Park Arena to earn its second victory in as many games.

The Lumberjacks started the game strong and finished stronger. Despite one lull late in the first half, Alpena controlled much of the game and the sophomore trio of Isaac Hogsett, Logan Guenther and Garrett Miller nearly outscored the Raiders by themselves.

The three Lumberjacks combined for 67 of Alpena’s 80 points.

“I took a quote from this morning’s newspaper from (Rogers City boys basketball coach) Matt Ponik and he said you have to expect to win, not hope to win and we talked in depth about that. I know sometimes we have hoped we can win, but from this morning after I read the article, I really pushed that hard for my guys,” ACC coach Mark Jacobs said. “We need to expect to win, no more hoping to win. We played together again and played good team ball. Our mantra now is expect to win and we went in with that attitude, even at halftime when they cut into the lead, we weren’t sweating it because we knew we were going to win because we had that attitude.”

The Lumberjacks were balanced and played unselfish, which led to success.

Guenther sparked Alpena in the early going as he scored 10 of ACC’s first 13 points to help them grab a lead and Hogsett began heating up to help the Lumberjacks extend the lead.

Alpena held its largest lead of the first half midway as it took a 28-16 advantage with a little over six minutes left.

Up to that point, Alpena had played its best 14 minutes of basketball all season, but once again, the Lumberjacks fell into an offensive lull and Oakland ended the half strong, hitting three triples in the final minutes to cut the lead to 37-35 at the break.

“We’ve talked all season about trusting each other. I honestly wish we would have just started our season because we know how we can play when we trust each other,” Jacobs said. “We moved the ball well again tonight and shared the ball better than we have all season. Everyone got involved and we were able to feed off of each other.”

Alpena came out energized in the second half and despite surrendering its lead three minutes in, the Lumberjacks responded with a 12-2 run to regain a lead.

They refused to give it up the rest of the night.

Miller was the beneficiary of Alpena’s tremendous ball movement in the second half as he found himself some open looks and didn’t miss, finishing with four threes in the game.

Another big factor for Alpena was the play of Steeve Nicolas who was active on the glass, grabbing 12 rebounds, including three key offensive rebounds in a row with 1:20 left to play. After corralling the third rebound, Nicolas was fouled and split a pair of free-throws to give Alpena its largest lead of the contest at 73-60 and the Lumberjacks were able to cruise to its second straight win at home.