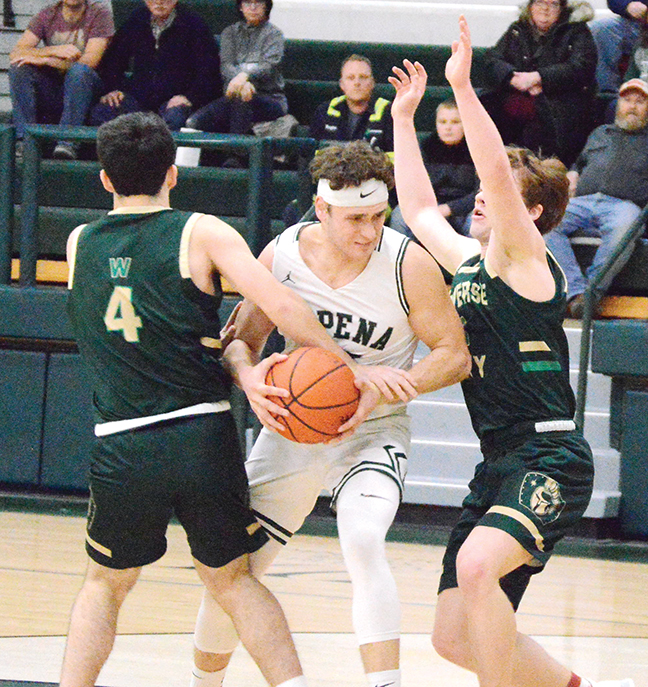 After rallying from an 11-point deficit to tie the game in the final minute, the Wildcats were left on the losing end of a 47-46 contest against Traverse City West at home.

The loss is the third in four games for Alpena (9-8, 2-6 Big North Conference) and the second one this week where the Wildcats lost by the slimmest of margins in the final minute.

“It was disappointing. I thought we had really good energy in the beginning of the game and unfortunately it didn’t translate into the scoreboard,” Alpena coach John Pintar said. “The bottom line was turnovers. We did a lot of good things defensively, we were creating turnovers on them and we just gave the ball back and made a lot of bad decisions with the ball.”

Down 44-33 at the end of the third quarter, the Wildcats began a furious rally and outscored the Titans 13-3 in the final eight minutes. Alpena continually powered its way inside for buckets and cut the lead to two, 46-44, with 1:17 when Cooper Bright knocked down a three-pointer to the approval of a roaring crowd.

Twenty three seconds later, Jadon Duncan made a heads-up defensive play stealing the ball around half court and converting an uncontested layup to tie the game.

West ultimately won the game when Patrick O’Connor was fouled with 35 seconds left and knocked down the first of two free throw shots. West grabbed the rebound off the miss and Parker Neu was fouled and missed.

Alpena got the ball back and called a timeout to set up a play, but the ensuing possession resulted in a short jumper that clanged off the rim with about two seconds left.

“Give our guys credit. I think all year these guys, no matter what the score is they’re always playing hard. We were able to finally create some turnovers that led to some opportunities for us,” Pintar said. “We made some shots, but we put ourselves in a bad spot not taking advantage of our (early) effort.”

Though the Titans were outscored 17-6 in the final 13 minutes of the game and were limited to just two field goals in that span, West was opportunistic offensively and made enough shots to keep Alpena at bay.

Traditionally a strong three-point shooting team, the Titans knocked down seven triples Thursday to put some space between themselves and the Wildcats.

Luke Robertson led West with 12 points–all on triples–and nine different Titans made it into the scoring column. Mel Frechette added eight and Carson Whipple had six.

“I think (opportunistic) is a great word. They took advantage of those opportunities and they played a really good road game,” Pintar said. “When you’re the home team you shouldn’t be making those mistakes. West has good athletes and they play good defense, but too many of those (opportunities) were careless mistakes by us.”

Despite Alpena’s attempts to rally, they came after three quarters of uneven play by the Wildcats. A high-energy start gave way to numerous turnovers, missed shots, a brief lead and a halftime deficit.

Alpena began the game on a 7-2 run, but trailed 15-10 after one quarter. The Wildcats were able to draw contact inside and got to the line for several three-point players in the second quarter, eventually pulling out a 25-20 lead.

All the pieces seemed in place for Alpena to keep the lead–making free throws and field goals, not to mention serious foul trouble for West–but the Titans regrouped and ended the half on a 12-2 run to take the lead, 32-27.

West’s success continued into the second half as the Titans drove inside for some crucial buckets including two from Neu, who battled early foul trouble and collected his fourth infraction early in the third quarter. Though West scored just a few points over the last 10-plus minutes of the game, the Titans effectively kept the ball out of Alpena’s hands for long stretches.

Alpena’s fortunates began to change in the fourth quarter. Jordan Schultz scored with 6:20 left to cut the lead to nine and a short time later, Schultz, Kelley Stark and Duncan all scored to make it 46-41 with 2:47 left before Bright and Duncan’s buckets tied the game.