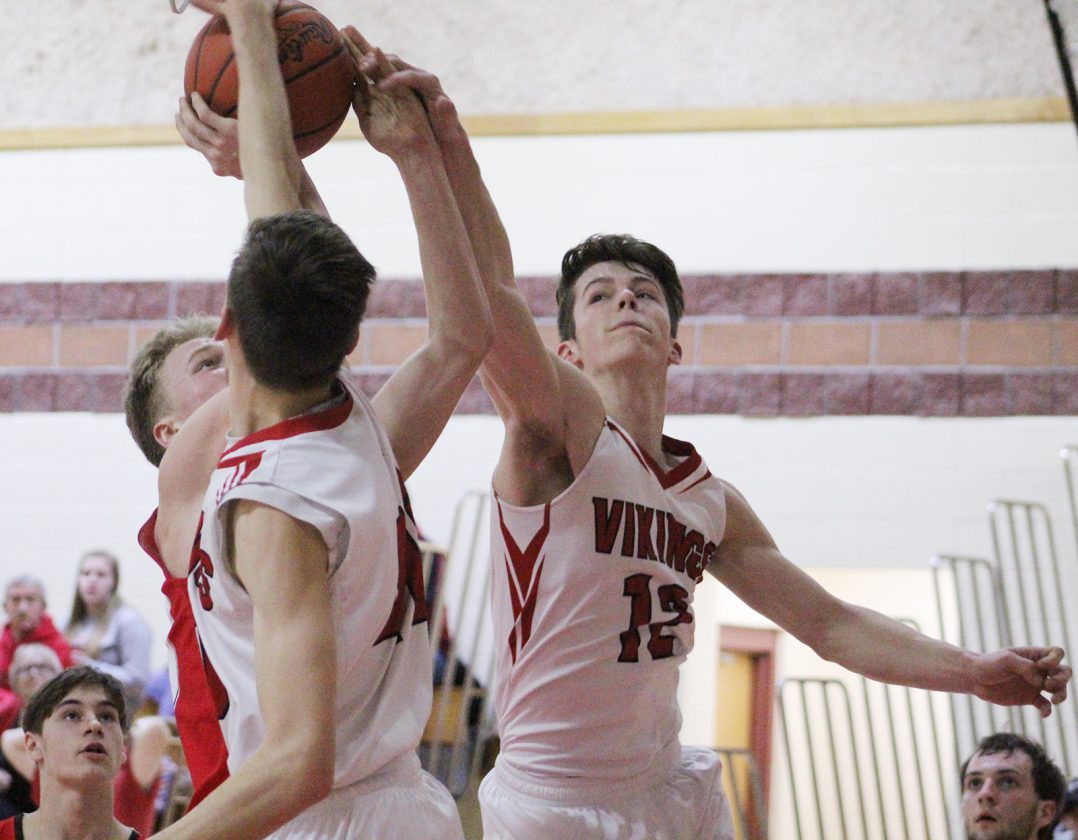 News Photo by Jonny Zawacki Posen defenders Lucas Stone (12) and Eyan Hincka contest a shot put up by Onaway’s Jager Mix during the third quarter of a boys basketball game on Wednesday at Posen High School.

POSEN — Coming off of a thrilling one point win over the then No. 6 ranked team in Division 4, Posen head coach Chris Keller was wary of a let down and preached to his Vikings to worry about the task at hand and take the rest of the season one game at a time.

There was absolutely no let down and no letting up on Wednesday as Posen scored 18 straight points to open the game and went on to dominated Onaway 72-26 at Posen High School.

“We’re in a good spot. This is the time of the year where you want to be playing good basketball,” Keller said. “I was really happy to see how we played after we beat Hale last week. We had conversations shortly after that and I almost felt kind of hard on the kids, but that was the goal that night, but beating them (Hale) does not mean its the end of the season so I didn’t want us to have a let down. The kids took what I said to heart and I was happy we got out to a fast start and played strong at both ends of the floor.”

The Vikings (12-4) raced out to an 18-0 lead and Onaway’s first point didn’t come until Pat Nelund hit a three with 40 seconds left in the first quarter and Posen held a commanding 15 point lead after one.

The second quarter was much of the same domination for the home team as the Vikings continued to force Onaway (3-13) into difficult situations and took advantage of the Cardinals’ sloppy play and being without starting point guard Kevin Pearson.

“That sucked. It’s definitely one we want to forget and we’re going to forget. We don’t have the size or ball handling right now, we’re banged up and injuries have been a killer for us,” Onaway coach Eddy Szymoniak said. “It’s something we have to forget about, I told the kids we’re not worried about this game. We’re just getting ready for the tournament, we have some new players up that are learning the offense and we have a couple of weeks to get ready and we’re just going to move on from this.”

Posen was in total control leading 38-9 at the half, but there was no letting up as the Vikings continued to run their efficient offense and tenacious defense the rest of the night and all nine players cracked the scoring column in the win.

Lucas Stone, Cameron Paull and Eyan Hincka all scored in double figures for Posen as Stone led all scorers with 14 points, Paull finished with 13 points and Hincka added 11 points. AJ Brunet and Wyatt Romel each chipped in with nine points and Chase Dubie scored all seven of his points in the final quarter to put the finishing touches on a game that belonged to the Vikings.

“We’ve just accepted our identity, which is defense. I think our kids really own it and they like it. That was the story tonight. We played some tough defense and were efficient offensively. I couldn’t be happier with how hard we played tonight,” Keller said. “I knew we would be tough defensively coming into this year, but we needed to get our offense rolling and I think we’re at a point now where we are figuring things out. We only suited up nine tonight, but all nine players scored and all got a lot of playing time which is always important.”

The Vikings are riding a six-game win streak and will once again be tested on Tuesday when they host another Presque Isle rival in Rogers City.

Onaway will return to action on Friday when the Cardinals host Mancelona.