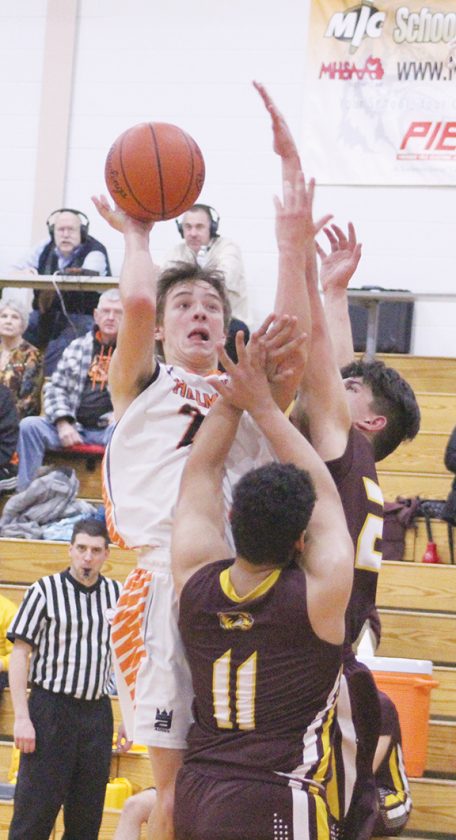 News Photo by Jonny Zawacki Hillman’s Nash Steinke goes up over a pair of Au Gres defenders contesting his shot during the second quarter of a North Star League Little-Dipper division boys basketball game on Tuesday at Hillman High School.

HILLMAN — It’s been a challenging season for the Hillman boys basketball team.

Entering Tuesday, the Tigers were in the middle of a seven-game losing steak.

Hillman’s last win was over a month ago against the same Au Gres team the Tigers welcomed on Tuesday. Fortunately for Hillman, history repeated itself and the Tigers were able to snap their losing streak and get back in the win column with a 51-41 victory over the Wolverines.

“We were definitely really lethargic tonight. Coming out with the intensity played in our last game and then compared to today is something we’ve battled throughout the year, just recognizing and understanding you have to play 32 minutes of basketball,” Hillman coach Eric Muszynski said. “Au Gres sat in that 2-3 zone today and we were really stagnant with the ball and we weren’t attacking that zone at all, we weren’t trying to dribble penetrate. We were throwing a lot of skip passes which led to a lot of turnovers early on in the first half. Just being lethargic and not playing at a quick pace was frustrating at first, but in the second half we went back to some of the more traditional pressure that we normally do and that might have woke the guys up a little bit. We can’t continue to play lethargic and at a slow pace like we did tonight.”

Despite holding a 13-7 lead after one quarter of play, the Tigers looked bland in the second quarter and were held to just six points. Hillman didn’t get many players involved as the duo of Nash Steinke and Isaac Morrision combined for 17 of Hillman’s 19 first-half points as the Tigers held just a one point lead at the break. Morrison scored 10 of his game high 22 points in the first half and Steinke finished with 13 points on the night.

Hillman made adjustments at the half and came out looking sharp early in third quarter as the Tigers scored the first eight points of the second half to jump out to a nine point lead.

“At the half, I really challenged the seniors. Your team is going to go with your seniors, that’s just how it is. Having Isaac and Nash on the floor at the same time is a good one-two punch and in high school basketball you need one or two guys that can score a little bit and if you got more that’s huge too,” Muszynski said. “The best part of the second half was we had them on their heels a little bit. Our big guys did a nice job opening up the high post and that opened some things up around the perimeter, but those two, Isaac and Nash were a big part of our success. I challenged those guys at the half and they both came through and was a difference maker.”

Hillman extended the lead midway through the third and held what appeared to be a comfortable 32-20 lead, but the rest of the contest was far from comforting for Muszynski and the Tigers as Au Gres scored the final six points and ended the third quarter on a 9-2 run to cut the lead to 34-29 heading to the fourth quarter.

A similar trend continued throughout the fourth as Hillman held leads of seven or more three different times early in the fourth, but the Wolverines kept clawing their way back into the game and cut the lead to four with 3:35 to play.

After Au Gres cut the lead to three, Morrison came back and drilled a big three to put the home team back up seven, but once again the Wolverines cut the lead back to four a minute later, but the Tigers didn’t let the lead slip and did a good job closing the game out as they responded with six unanswered points to grab a 10 point lead with 1:07 left and put the game away.

“It was huge for us to respond the way we did today, because at the end of each quarter we worked the clock for the last shot because the final minute of the quarter has hurt us this season. Tonight, for us to have the patience to execute at the end of quarters and have a lead and realize you have to be patient and not be in a hurry, that was huge tonight,” Muszynski said. “Hats off to our guys on that end doing those little things. It’s baby steps and it has been all year and hopefully we can continue to regroup.”