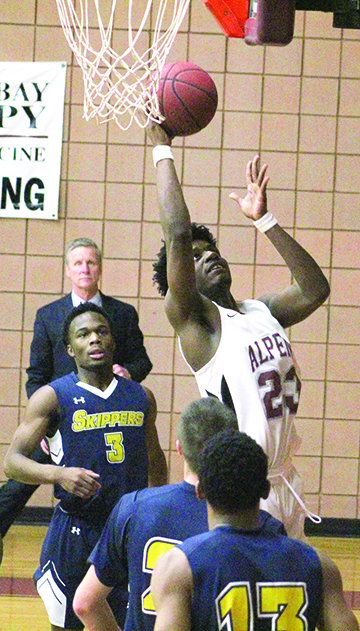 News Photo by Jonny Zawacki Alpena’s Steeve Nicolas (23) goes up to the basket and scores on a layup during the second half of a men’s basketball game against St. Clair County Community College on Monday at Park Arena.

Just two days after playing one of its best halves of basketball in recent memory and losing a heartbreaker, the Alpena Community College men’s basketball team seemed to still be dwelling on tough loss and couldn’t find its rhythm in Monday’s 79-57 loss to St. Clair County Community College at Park Arena.

Despite honoring four sophomores–Logan Guenther, Garret Miller, Isaac Hogsett and Tyler Ross–before the game, the Lumberjacks came out flat, were ice cold in throughout the first half and never found a way to shake out of what ended up being a 40-minute slump.

“I was actually really surprised that we came out that flat,” ACC coach Mark Jacobs said. “My typical big scorers started off slow and it was just one of those games where we couldn’t get anything going. I won’t say anything about some of the calls, but it just was not how I envisioned tonight’s game.”

Despite Alpena’s lack of rhythm and slow start to the game, the Skippers weren’t much better in the early stages of the first half.

After seven minutes of play, the Lumberjacks trailed 14-11 after a Cleveland Baker three, but Alpena was only able to score seven points the rest of the half.

One of the momentum swings in the game came in the final seconds of the first half as Alpena’s Chris DeRocher was called for a questionable technical foul on a three point shot attempted from St. Clair’s Dane Vos.

The Skipper capitalized on the tech and the free-throws, turning in a five point trip down the floor with just four seconds remaining.

The Lumberjacks quickly inbounded to Hogsett and in what appeared to be a bit of a make up call, Hogsett was fouled near mid court on an attempted half court heave at the buzzer.

Hogsett made two of three free-throws and Alpena went into the break trailing 30-19 after a low scoring half for both sides.

“There was no rhythm tonight. When I have a few guys hitting and in rhythm the rest of the guys seem to follow suit, but tonight it was exactly the opposite,” Jacobs said. “Our main scorers couldn’t get going and it was a trickle-down effect for the rest of the team and we just didn’t have it tonight. I’m disappointed for my guys, especially my sophomores because I know that’s not how they wanted to go out on their home floor. Luckily, we’ll have one more opportunity to send them out on a high note.”

The second half belonged to the Skippers as they found their rhythm.

St. Clair opened with five straight points and went on a 15-0 run midway through the half to break the game wide open and take a 52-26 lead.

The Skippers didn’t stop there and scored 11 straight to take their largest lead of the night at 66-32 with 9:33 to play.

Alpena answered with 12 of the next 14 points, but it was the most rhythm the Lumberjacks could find and it wasn’t nearly enough as the Skippers closed a 49 point second half to strong.

What offense Alpena was able to come up with came from Miller who scored 15 points on the night. Baker finished with 10 points and Steeve Nicolas added eight points in the losing effort.

The Lumberjacks will finish the 2019-2020 season on Wednesday when they travel to Macomb Community College. 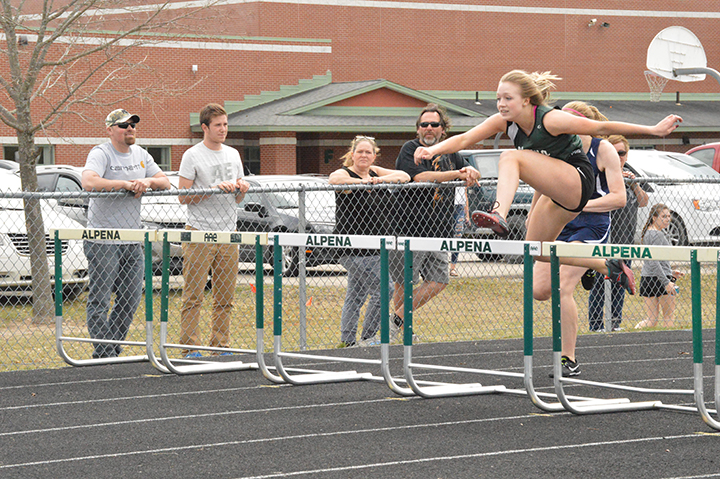 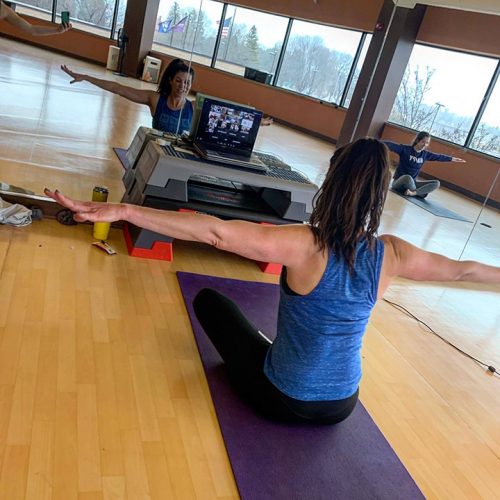