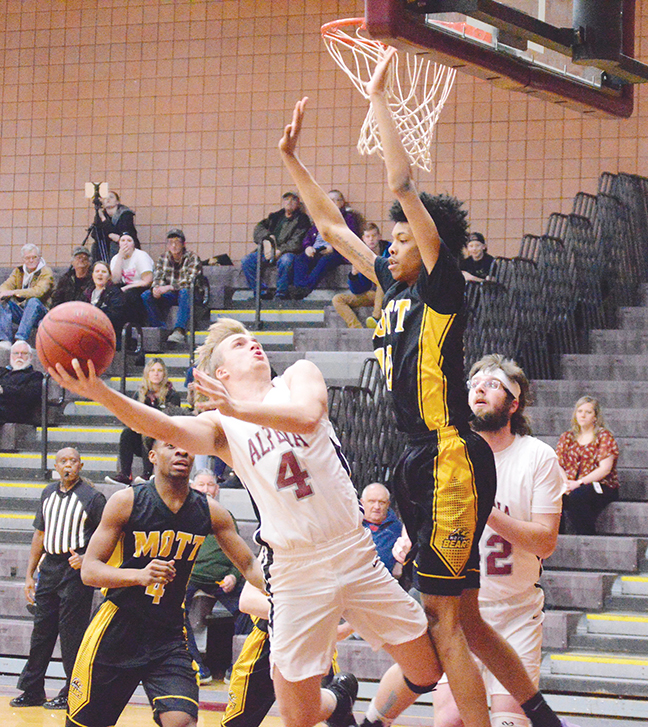 News Photo by James Andersen ACC’s Garret Miller (4) drives to the basket while being defended by Mott’s Tyland Tate during the first half of a men’s basketball game on Monday at Park Arena.

But boy did the Lumberjacks sure try.

Two days after being routed by 40 against the Bears and after they trailed by 28 at halftime on Monday, the Lumberjacks played an inspired second half and gave Mott a run for its money during an 83-68 loss at Park Arena.

ACC (2-20, 1-11 MCCAA Eastern) overcame a flat first half to pull within 11 with three and a half minutes to play before the Bears iced the game at the free-throw line.

“We came out really flat in the first half. In the second half, we opened it up and played our game and played much better,” ACC coach Mark Jacobs said.

Isaac Hogsett scored 19, Logan Guenther had 13 and Garett Miller and Chris DeRocher each had 11 for the Lumberjacks, who played arguably 10 of their best minutes of basketball to begin the second half.

Trailing 55-27 at intermission, the Lumberjacks were patient and move the ball with fluidity to cut Mott’s lead down to 18 less than four minutes into the period.

It was an impressive feat considering Mott nearly led by 30 in the first half and took advantage of numerous ACC turnovers to built what seemed like an insurmountable lead.

“I challenged them to see what they were made of at halftime…I was really proud of the way we came in the second half,” Jacobs said.

The turnovers in the first half and Mott’s depth ultimately hindered ACC’s chances to win, but the Lumberjacks held their own in the second half, outscoring the Bears 41-28 over the final 20 minutes.

Vaunted 6-foot-9 big man Taylor Currie paced Mott with 19 points and was one of four Bears to finish in double figures. JD Rawls had 17 points, Austin Rowland had 12 and Andre Bradford had 10. In all, nine different players scored for Mott and the Bears got 33 points out of their bench.

After racing out to a 14-5, and later a 22-9 lead to begin the game and knocking down shots with ease, points didn’t come as easily for the Bears in the second half. This allowed ACC to keep within reasonable striking distance while making some impressive plays.

DeRocher capped ACC’s early 12-2 second run with a spin move inside for a layup to cut the lead to 18. Then less than a minute later, Steeve Nicolas took a nifty pass from a teammate, drove the baseline and finished with a reverse layup. He added a pair of free throws on a Mott technical foul a short time later to cut the lead to 17.

ACC made some serious inroads later in the half when Miller converted a three-point play and DeRocher knocked down a pair of free throws, making it 75-62 with 4:02 left.

Less than a minute later, Hogsett knocked home a pair of free throws to cut the lead to 75-64, bringing the Lumberjacks within a stone’s throw of cutting the lead to single digits.

“We played hard,” Jacobs said. “I’m proud of the second half, proud of my guys who stuck together and showed we could play some decent basketball.”

Unfortunately for ACC, offense proved hard to come by over the next few minutes and several shots missed the mark. Mott in turn made the most of its foul shots and went 8-of-12 from the charity stripe in the final 1:19.

ACC plays at Schoolcraft on Wednesday.