Wildcats claw back to earn victory over rival TC Central

News Photo by Jonny Zawacki Alpena’s Jade Schultz (34) goes to the hoop and scores on a layup while being contested by Traverse City Central defender Peyton Carlson (41) during the second quarter of a Big North Conference girls basketball game on Friday.

The Alpena High girls basketball team had plenty to play for on Friday.

Nothing came easy on a night where the Wildcats did not play up to their potential, but in the end, Alpena found a way, clamping down defensively and scoring timely baskets in the fourth quarter to come away with a 44-39 win.

“Turnovers and free throws were an issue tonight, but we knocked down a couple of big shots late and put them (Central) in foul trouble and slowed the play down,” Alpena coach Erin Andrews said. “I just kept telling the girls to settle down and make some shots. I’m just really proud of this team. They come together and they’re a great group of kids to be around and I told them in the locker room that I appreciated their hard work today and this week. They listen and are just a good group.”

Despite shooting 8-for-25 from the free-throw line and trailing most of the game because of it, the Wildcats saved their best effort for when it mattered most in the fourth quarter. 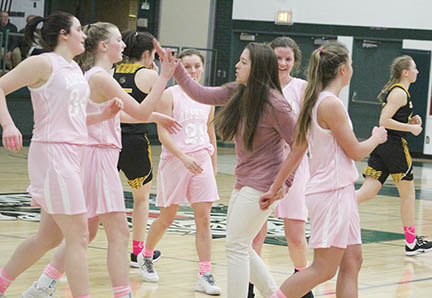 News Photo by Jonny Zawacki Alpena head coach Erin Andrews celebrates with her team after the Wildcats took a lead in the fourth quarter. Alpena defeated the Trojans 44-39 to remain in second place in the BNC.

Alpena trailed by eight early in the third quarter, but chipped away at the deficit and cut the lead to 34-32 after three quarters.

The Wildcats scored the first two baskets of the fourth quarter on layups from Allie DeRocher and Jade Schultz who finished with 16 points and 14 points respectively.

The two quick fourth quarter baskets gave Alpena a lead with 6:40 left to play and it gave the Wildcats their first advantage since Elyse Clarke opened the contest with a three-pointer.

Once the Wildcats took the lead, they clamped down defensively and continued to build on the lead. They opened the fourth quarter by scoring 11 of the first 12 points to take a 43-35 lead late. Alpena moved the ball around offensively and played keep away from the Trojans to milk the final minutes of the game away.

“We needed to just run our offense and find good shots. Late in the game we did a good job running our offense and taking our time and we did a great job rebounding and we cleaned up a lot of offensive rebounds and that was key for us late,” Andrews said. “We played good defense in the fourth quarter. If we could play defense like that in all of the other quarters it wouldn’t be so bad. Our girls made the adjustments when we needed them to and they really listened in that fourth quarter. We said if we wanted to win this game, we needed to get it done right now and the girls did.”

Not only did the free-throw shooting hurt the Wildcats, but they missed a handful of easy shots underneath the basket and allowed Central to not only stay in the game, but hold a lead for a majority of the contest.

Carina Stewart led the Trojans with 12 points on the night and Jordan Burnham chipped in with eight points.

DeRocher and Schultz were the lone Wildcats to score in double figures on the night and the duo came up big down the stretch as each of them scored six points apiece in the final quarter to propel Alpena to a much needed victory on a special night.

“The kids always love the Pink Game and they love wearing the pink uniforms and honoring people in the community who have had cancer affect their life in some way. All that goes into it is special and it shows the kids how to give back,” Andrews said. “I’ll take being in second place in the BNC for now and hopefully we can get some help from everyone else with Cadillac and there’s definitely potential for it. We’ll see Cadillac again and if we get some help and continue to do our job, it could make things very interesting in the Big North.”

The Wildcats will return to action and BNC play on Thursday when they travel to Petoskey.

The Alpena JV team lost to Central, falling by a score of 31-27.

News Photo by Jonny Zawacki Alpena’s Jade Schultz (34) goes to the hoop and scores on a layup while being contested by Traverse City Central defender Peyton Carlson (41) during the second quarter of a Big North Conference girls basketball game on Friday.

News Photo by Jonny Zawacki Alpena head coach Erin Andrews celebrates with her team after the Wildcats took a lead in the fourth quarter. Alpena defeated the Trojans 44-39 to remain in second place in the BNC.