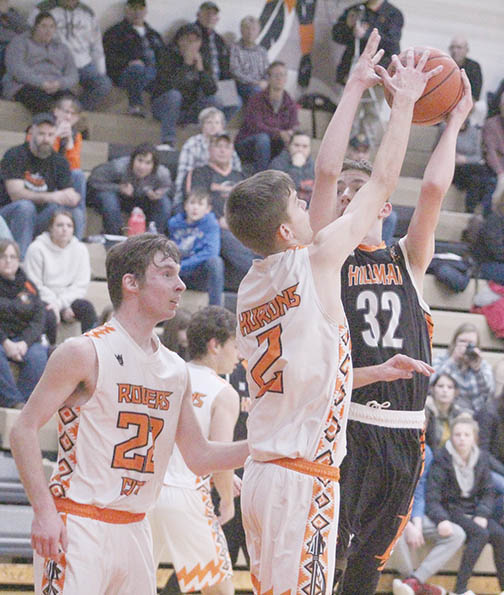 ROGERS CITY — The Rogers City boys basketball team has made it a point to play strong defensively.

The Hurons played host to Hillman on Tuesday and the Tigers entered the contest struggling to score consistently.

A good defensive team against a poor offensive team spelled disaster for the visitors as Rogers City shut down the Tigers en route to a 55-24 drubbing at Rogers City High School.

“We’re really working on being good defensively and you could see it tonight,” Rogers City coach Matt Ponik said. “We played really good defensive and forced them (Hillman) into tough shots, nothing was easy. I was really proud of the way we rotated tonight and it was one of our better efforts on defense and our offense finally came through later on. It was good to see the kids have more confidence shooting the ball and it was a good all around effort.”

Both teams played a physical game from start to finish and each side was cold offensively in the opening quarter. The Hurons held a six-point lead despite just 14 total points in the first.

Rogers City put together a solid second quarter at both ends of the floor and scored the final nine points to go into the break with a double-digit lead after dominating in the rebound department, limiting the Tigers to just five total rebounds in the first half.

“I think we do some things well defensively and I think these guys understand the way we need to play. I don’t know if they quite understand the particular intensity you have to have throughout a game. In the first we had five rebounds and you can play very sound defense and get stops, but when they’re getting rebounds, that’s a back-breaker and that’s what happened early on,” Hillman coach Eric Muszynski said. “Early on I thought we played pretty good defensively and as funny as it sounds, there was some positives, but we just have to do a better job boxing out and obviously the number one problem here is our offense. We’ve struggled to shoot all year, there’s no secret behind that. When you’re shooting as poorly as we are it’s tough, but there are some positives there and some things we do that are good, but our inability to rebound and score makes it tough to win ball games.”

The Tigers didn’t help themselves any by going just 2-for-11 at the charity stripe and turning the ball over at a high rate throughout the game.

Rogers City’s defense kept the pressure on Hillman all night and the turnovers that the Hurons created, along with their ball movement throughout the contest led to good looks and easy baskets.

“We moved the ball a lot better today and we preached that in practice the last few weeks about moving the ball against zones and even against man-to-man, we need to make opposing defenses work because eventually it will break down,” Ponik said. “We did miss a lot of easy baskets tonight, but overall very proud of the kids in what was a physical game which was good. Later on down the road we’ll play in different games where different things get called so we have to be able to adapt to that. We held them to one and done’s on the defensive end and we were getting extra shots on the offensive end and that’s how you get leads in basketball. It’s about that extra effort and tonight we had that.”

The Hurons will return to their home court on Thursday when they host Alcona.

What offense Hillman was able to muster came from senior Nash Steinke who scored a team-high 12 points.

“I don’t want to say we took a step backwards, but we didn’t shoot the ball well and obviously didn’t rebound well, but there were some things in spurts that looked good,” Muszynski said. “Rogers City is a good team and hats off to them. Hopefully we’ll be able to turn things around later this week.”

The Tigers will be back in action on Thursday when they host Posen.