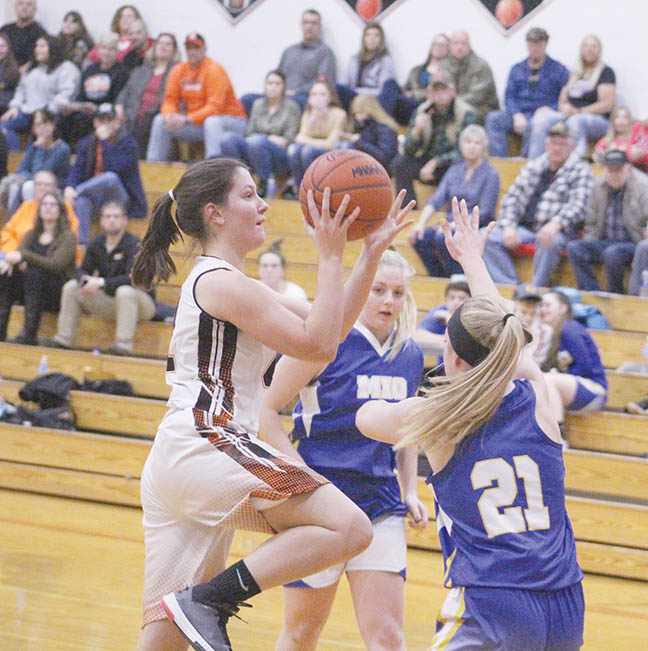 News Photo by Jonny Zawacki Hillman’s Melanie Morrison (41) drives to the basket and puts up a shot while being defended by Mio’s Sierra Lunning (21) during the second quarter of a girls basketball game on Monday. Morrison made a game-winning three as time expired to lift Hillman past Mio 42-41.

The Tigers (8-4) were without head coach Jenny Taratuta, due to prior obligations and Hillman started off slow, scoring just two points in the first quarter.

The Tigers even trailed by double digits at the half.

Thankfully for the Tigers, they picked up the intensity and played much better in the second half. Hillman received a huge spark from junior Melanie Morrison who played the role of hero on Monday, scoring nine of her 11 points in the fourth quarter and draining a game-winning three with 2.7 seconds left to play to lead the Tigers to a thrilling 42-41 victory over the Mio Thunderbolts.

“I just knew that I needed to make that shot,” Morrison said. “We weren’t focused in the first half and we just needed get it together. I was just going in that fourth quarter and giving everything I had.”

Hillman trailed by 12 after a sluggish first half, but quickly chipped away at the lead. The Tigers scored the first nine points of the third quarter to cut the lead to three.

The Thunderbolts (3-8) were shorthanded as their starting five were the only players available and fatigue started to set in late.

Hillman took its first lead of the night with 3:53 remaining when Morrison scored on a layup.

The Tigers stole the ensuing inbound and Morrison got another basket to go and Angelina Hunt rattled home a mid range jumper on Hillman’s next possession to give the home team a 37-32 lead and force a Mio timeout with 1:28 left.

“Our goal was to just come out and play basketball tonight, move the ball and do things that we’ve worked on the past few weeks of practice and put them into play today,” Hillman assistant coach Jessica Barbeau said. “At first it was tough, but the girls came together as a team and our teamwork was huge for us tonight.”

After Hillman grabbed the momentum and what appeared to be a comfortable five point lead against a shorthanded Mio team, the final minute was far from comforting for either side.

Phynix Rickett put the Thunderbolts on her back late, hitting a three and another two point basket to tie the game with 50 seconds remaining.

The drama intensified as Hillman went back down to court and Morrison put the Tigers back up by two with 40 seconds left and Rickett responded with a deep three to put Mio up 40-39 with 26 ticks left.

The Tigers were unable to score on their next possession and were forced to foul, sending Rickett to the line. Rickett was a perfect 7-for-7 at the stripe to that point, but she missed the second of two free throws and Hillman dribbled the ball down the floor with 13 seconds left.

Hillman got the ball into the hot hand of Morrison and she delivered by burying a three with 2.7 seconds left and time expired, sending the Hillman bench and crowd into a frenzy as the Tigers escaped with a one point win.

“A lot of what we wanted to do was depending on the free-throw and they (Mio) missed it, which was huge and I told the girls as soon as we get the ball, we needed to get it down the court and we needed one shot and one good shot and Melanie did it,” Barbeau said. “The play was not drawn up for anyone in particular, it was just find whoever is open and it’s their shot. Credit the girls for getting the ball up the court, quickly moving the ball around and finding that open shot.”

Rickett led all scorers with a game high 19 points as the Thunderbolts were efficient from beyond the three point line in the first half, connecting on five triples in the half and seven on the night.

The Tigers played better defensively in the second half and limited Mio’s open looks.

Along with Morrison’s special night, Bailey Schook paced the Tigers with a team high 14 points in the victory.

Hillman will look to build off of it’s exciting win when they welcome Hale on Thursday.

The Hillman JV team was also victorious, defeating Mio by a score of 36-10.

Regina Morrison led the Tigers with 12 points and Rebecca Neff and Brooke Bennett each added eight points apiece in the win.

Amazon says email to employees banning TikTok was a mistake