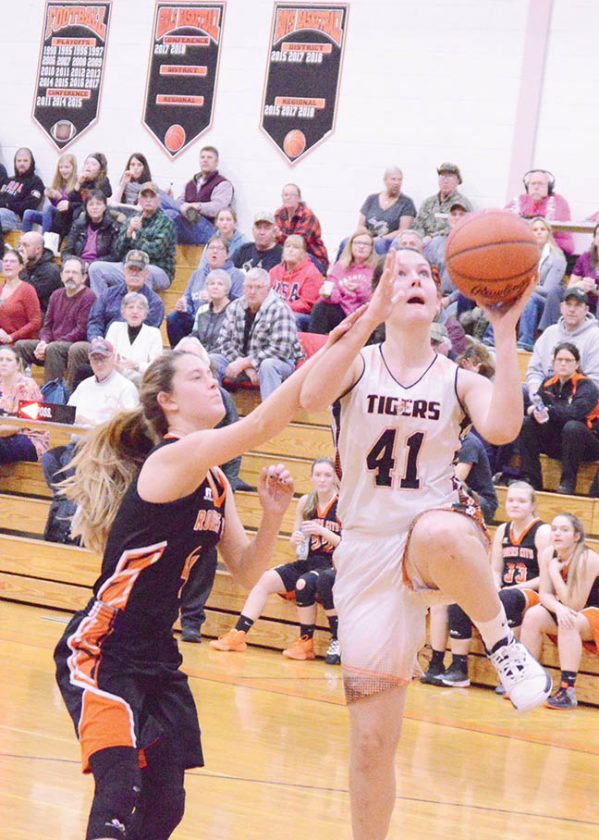 News Photo by James Andersen Hillman’s Melanie Morrison (41) drives in for a shot while being defended by Rogers City’s Kyley LaFleche during the first half of a girls basketball game on Monday at Hillman High School.

HILLMAN–The Hillman girls basketball team got a little more than it bargained for on Monday, but at the end of the night the Tigers were able to walk away with another win.

Bailey Schook scored 23 points and led a strong defensive effort in the second half as the Tigers held off a challenge from Rogers City to win 47-43 at Hillman High School.

“I wasn’t anticipating (a game like this). I was up for another win like we had against Au Gres (last week) and ready for some good teamwork and mental errors kind of hurt us,” Hillman coach Jenny Taratuta said. “We fought back. They had some good shooting and our shooting was off, so it came down to us having to make our inside shots.”

Hillman (7-2) led by seven early in the fourth quarter, but the Hurons, in one of their strongest efforts, of the season, kept finding ways to keep the game close.

Rogers City (1-7) finished the game with eight-three-pointers including seven in the second half.

The last one from Kyrsten Altman, made it 44-43 with 16 seconds left, but the Hurons could get no closer. Rogers City missed a handful of shots in the final 90 seconds, including a shot that rolled around the rim and out with three seconds left.

“I’m happy with the effort. We would’ve liked to have won it, but we saw some things we’ve got to clean up and free throws hurt us a little bit,” Rogers City coach Duane Pitts said. “We had a shot at the end to tie it…From where we’ve been to this point, this is more of what we’re capable of doing.”

With time running down, Rogers City fouled and Hillman iced the game at the free throw line.

Free throws played an important role and allowed Hillman to stay ahead at times when shots weren’t falling consistently. Hillman went 19-for-33 from the charity stripe and Rogers City went 7-for-13.

Trailing by six with 5:36 to go, the Hurons got hot again from the long line as Emma Budnick drained a triple and then two free throws to make it 36-35. Altman drained another three-pointer just seconds later to give Rogers City the lead, completing an eight-point swing in just one minute of game play.

Schook, who likely finished the game with double digit steals, helped Hillman overcome a slow start and led its defensive efforts to frustrate the Hurons in the second half. Using a full-court press, Hillman limited the Hurons to just a pair of two-points field goals in the third quarter, though Rogers City did make four triples.

But the relentless pressure allowed Hillman to ramp up its defensive efforts and more often than not, it was Schook who stole the ball in the back court and went back the other way to set up a scoring opportunity. Pressure was what Taratuta told her team she wanted to see more of at halftime and the Tigers responded, ultimately pulling ahead by 10 late in the third quarter.

“Steals and intensity. She’s good at putting that on (opponents) and letting them crumble and make mistakes,” Taratuta said of Schook.

Rogers City led 10-6 after one quarter after both teams traded shots at the free throw line.

Rogers City plays at Alcona on Friday and Hillman plays at Posen the same day.