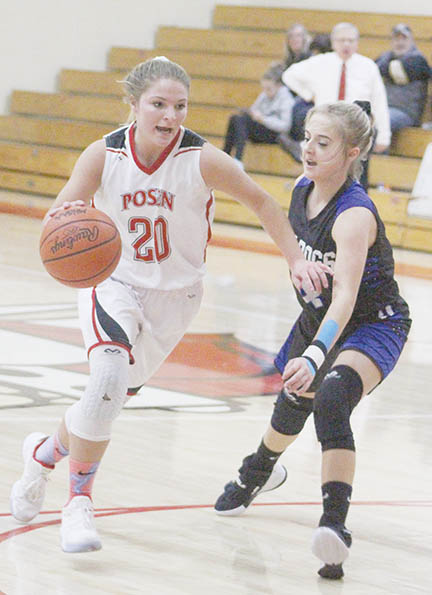 POSEN — The Posen girls basketball team has displayed its ability to move up and down the floor, spread the ball around, create easy baskets offensively and wreak havoc on defense thanks to an athletic group.

On Monday, the Vikings showcased all of these skills in a convincing 65-40 win over Inland Lakes at Posen High School.

“This team is capable of doing some good things. We can move the ball around real well,” Posen coach Karl Momrik said. “I’m really proud of our defensive effort and offensively we made a lot of bunnies tonight, made some free-throws and just couldn’t be happier for the kids.”

Posen got off to a fast start as Riley Krajniak’s effort from start to finish seemed to energize the Vikings. Krajniak was doing everything from getting buckets, creating easy baskets and diving on the floor playing tenacious defense.

Posen opened the game with a quick 10-2 run. Eight of the Vikings’ points came from Krajniak who finished with 11 points, all coming in the first half.

Three Vikings finished in double figures as Elena Kalbitzer scored a team high 17 points and Lizzy Romel added 10 points. Makayla Kamyszek chipped in with nine points and all but two Vikings scored and everyone saw action in the win.

“We got kids who can run and that’s the good thing,” Momrik said. “Riley is our leader on offense. She can handle that ball and she gets it to the people who can put it in the hole and she just played an outstanding game and you can’t say enough about the girls that played. We just had a lot of kids that contributed tonight. It was just a great performance.”

Posen got out to its early lead and never looked back as it kept up the intensity, defensive pressure and moved the ball at a steady and efficient rate.

After holding a seven point lead after one quarter, the Vikings went on a 16-2 run in the second quarter and blew the game wide open, taking a comfortable 32-15 lead in the break.

“We had two real good halves and it was just a good all around performance, you just can’t say enough about those kids,” Momrik said.

The second half was much of the same.

Despite a commanding lead, the Vikings continued to apply pressure, force turnovers, make good decisions and scored easy baskets as the lead grew to 21 after three quarters and Posen was able to coast to a hard earned lopsided victory in its home gym.

Olivia Monthei led Inland Lakes with a game high 19 points on the night.

The Vikings improve to 6-1 overall on the season and will be back in action tomorrow when they host Hale.