ACC men no match for No. 4 Schoolcraft 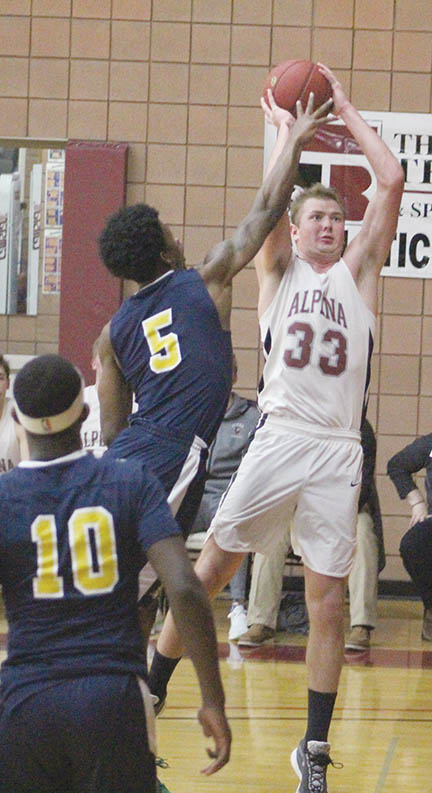 It’s been a challenging season so far for the Alpena Community College men’s basketball team and Wednesday night presented the Lumberjacks’ biggest challenge to date as they welcomed Schoolcraft.

The Ocelots (16-1) showed exactly why they are the No. 4 ranked team in the nation in Division 2, showcasing their skill with a suffocating press defense, efficient shooting from all over the court and a handful of acrobatic dunks as they took care of Alpena, defeating the Lumberjacks 103-58.

“They (Schoolcraft) played like the No. 4 team in the nation and we played like a team that hasn’t won yet. We just came out and didn’t take it at them. We were very tentative, even on our own court,” ACC coach Mark Jacobs said. “They’re a good ball club, but the loss is 100 percent on me. I’m the guy who put together this team and I’ll go to war with these guys every day. The loss is not on them, it’s on me. Turnovers and missed puppies really hurt us a lot, but again, I’m going to go to battle with these guys. We had some good moments, but couldn’t put it together consistently. This game is over with, we have to move on and try to get a win Saturday.”

The onslaught began right from the opening tip as Schoolcraft scored 16 of the first 18 points to begin the game and opened up a big lead early.

The Lumberjacks appeared to weather the early storm and cut the lead to seven midway through the first half, but the Ocelots revved up the defensive pressure, forced turnovers that led to easy points and exciting dunks as they regained their double-digit lead and never looked back.

Schoolcraft was superb at both ends of the floor in the final eight minutes of the opening half and held a commanding 60-24 lead at the break as the Ocelots ended the half on a 25-4 run.

“We obviously have to work on the press break. We panicked and unfortunately we’re down to two guards right now due to injuries, but that’s the cards we were dealt and we just have to do with what we have right now,” Jacobs said. “Their press was fantastic and we have to work on our ball handling and breaking the press. We have a lot of hard work ahead of us, but I’m not throwing in the towel and neither are these guys. They’re my guys.”

After building what seemed to be an insurmountable halftime lead, Schoolcraft was able to coast to a dominant victory.

The Ocelots featured a balanced attack across the board as five players scored in double figures.

Zavon Godwin led all scorers with a game high 20 points and dazzled Park Arena with some special dunks. Randy Gilbert added 16 points, David Wren and Myles Dalton each finished with 15 points and Carl Bow Jr. chipped in with 11 points.

Alpena was paced by Logan Guenther who scored 15 points. Travis Woodward finished with 12 points and Chris DeRocher and Isaac Hogsett each chipped in with eight points apiece in the losing effort.

“I saw some positive things tonight and I know the score would never reflect that, but we’re going to take the good and the bad together,” Jacobs said. “We’re going to continue working hard and we’ll be ready for Saturday.”

The Lumberjacks travel to Delta Community College on Saturday for their next contest.