A night of frustrating finishes 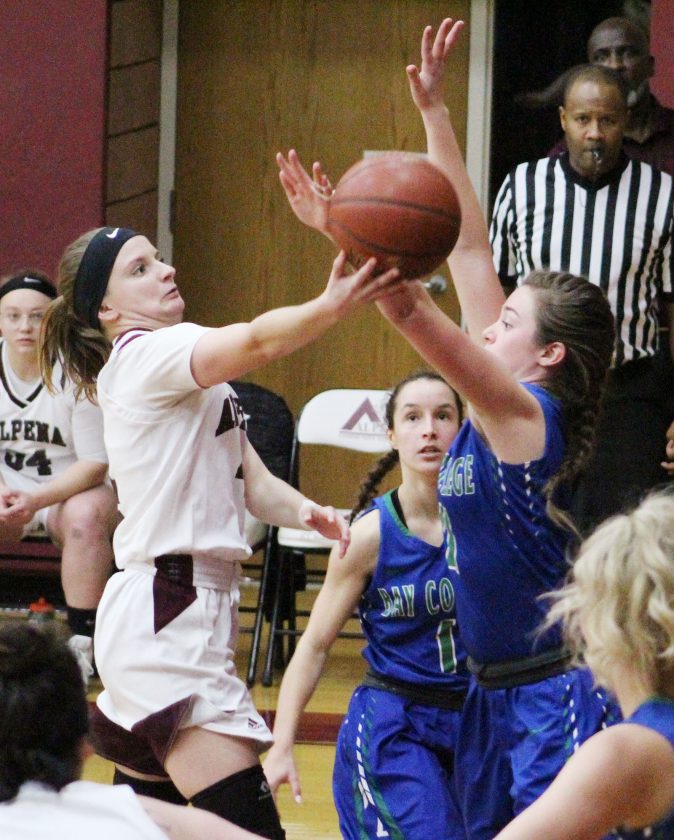 News Photo by Jonny Zawacki Alpena Community College freshman Mollie Girard (4) drives to the basket and takes a contested shot through a host of Bay Community College defenders during a women’s basketball game on Saturday at Park Arena.

Once again the Alpena Community College women’s basketball team showed its continued improvement, but unfortunately Saturday’s end result was one the Lumberjacks are all too familiar with.

The Lumberjacks led Bay College for much of the game, but Alpena struggled late, turning the ball over and going cold offensively. The Lumberjacks surrendered a late lead and eventually fell to the Norse by a final of 57-51.

Alpena took lead within the first five minutes of the game and had it going early from distance as the Lumberjacks connected on five three pointers in the first half.

The Lumberjacks held the lead and despite an effort to pull away, their largest lead of the contest was a 24-16 advantage early in the second quarter after Brooke Nguyen nailed the teams’ fifth triple of the half.

The game was tight the rest of the way and Bay turned up the defensive pressure late in the game and gave the Lumberjacks trouble with its full court press. The Norse took their first lead since the early stages of the opening quarter when Marissa Ackerman made a shot and got fouled with 4:38 left in the game.

After seeing its lead slip away, Alpena tied the game on four separate occasions in the final minutes, but a 51-51 tie with 1:30 remaining was as close as the Lumberjacks got the rest of the night. Holly Wardynski gave the Norse a 53-51 lead, Bay got a stop on Alpena’s next possession and Madison Olsen came down and drilled a big shot to give the Norse a four point lead with 30 seconds left and Alpena was unable to make shots late and Bay closed the game out with a pair of free-throws.

Olsen provided a spark for the Norse, scoring a team high 13 points in the win and Brooke Dalgord added 12 points.

Dakota Prevo paced the Lumberjacks and all scorers with 16 points. Mollie Girard finished with 12 points and Nguyen chipped in with nine points.

One of the big blows for the Lumberjacks came with four minutes remaining. Not only did the Norse take a lead for the first time since early in the first quarter, but Lumberjacks sophomore Kyra Feighner went down, left the game with an injury and did not return, which seemed to deflate the Lumberjacks as they were only able to muster seven points in the final four minutes and came up just short, falling to 2-9 overall on the year.

Alpena will be back in action on Wednesday as they look to get back on track when they travel to Henry Ford (0-13) to take on a winless Hawks team that has lost all but one game this year by double digits.