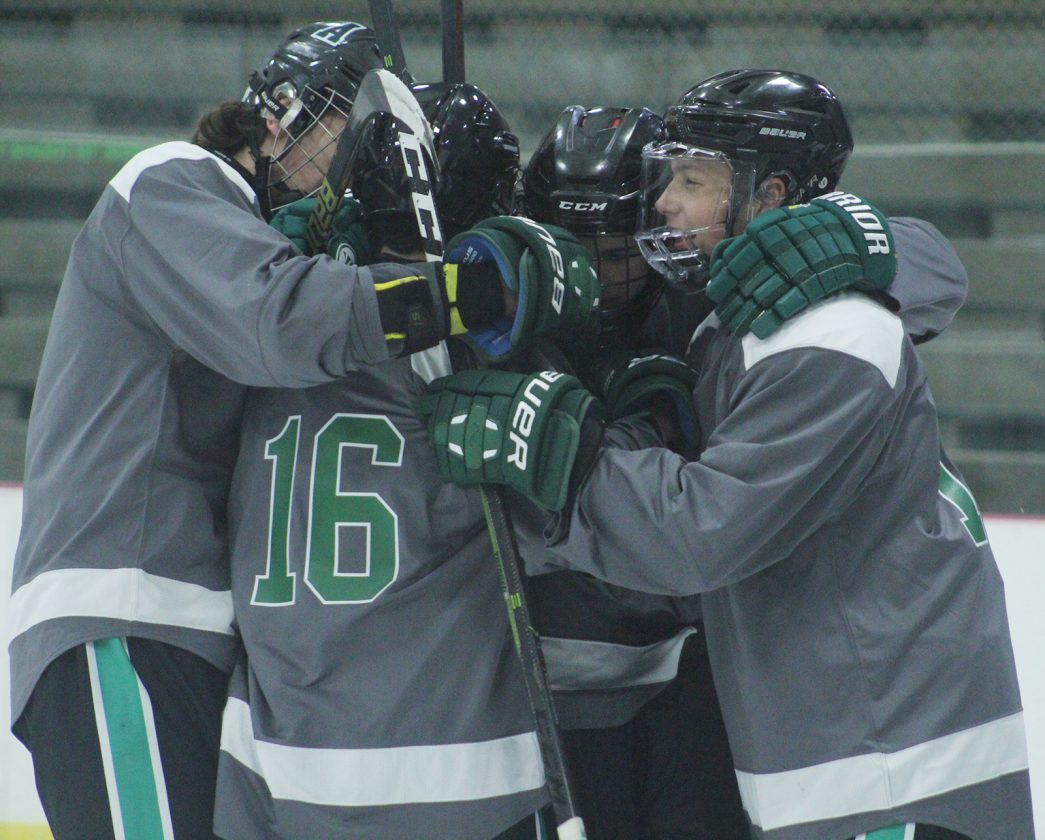 News Photo by Jonny Zawacki Members of the Alpena High hockey team celebrate after scoring a goal against Sault Ste. Marie during a consolation game in the Wildcats' Thanksgiving Classic on Saturday at Northern Lights Arena.

Entering Saturday, the Alpena High hockey team had endured a lot of heartbreak and frustration early in the season.

The Wildcats (1-3) were in need of some good fortune and a confidence boost and that’s exactly what they received as they earned a shut out victory over Sault Ste. Marie, defeating the Blue Devils 6-0 in the consolation game of Alpena’s Thanksgiving Classic at Northern Lights Arena.

“I’m very happy for the kids. Losing is tough and it just grows on you, so it’s nice to snap back and play good. We finally had some smiles today,” Alpena coach Chris Limback said. “I thought we worked hard and capitalized on our chances and came away with a good win.”

It had been a struggle for the Wildcats through their first three games putting pucks in the net as they had only scored two goals, but fortunately for Alpena, the Blue Devils entered the contest without a goal and the Wildcats dominated the game from start to finish.

Alpena opened the opened the scoring early in the first period when Ian Lightfoot sent a shot on net that made its way past Sault goaltender Triston Forgrave.

Less than a minute later, Lightfoot found the back of the net again as he shoveled home a rebound after a scramble in from of the Blue Devils’ net.

With 2:08 remaining in the period, Alpena added another goal to take a 3-0 lead after Tanner Orban lit the lamp.

“We just have to keep working together as one unit. We have guys learning to play different positions and I thought we did a lot of good things today,” Limback said. “The key to the game today was our ability to move the puck around and that’s the trust factor right now. The veterans have trouble trusting the young guys and we have to learn it doesn’t matter what age or how many years we’ve been playing. We just have to understand we’re a team and trust each other figure out how to play together as a unit.”

Alpena added a goal in the second period when Blaise Keller fired a shot on net and collected his own rebound and sent the puck past Forgrave to give the Wildcats a four goal lead.

Alpena added two more goals in the third as Keller and Orban each picked up their second goals of the game.

Collin Lightfoot stopped all 14 shots he faced to pick up his first career shut out as Alpena outshot the Blue Devils 33-14 and skated away with a lopsided victory and picked up their first win of the year.