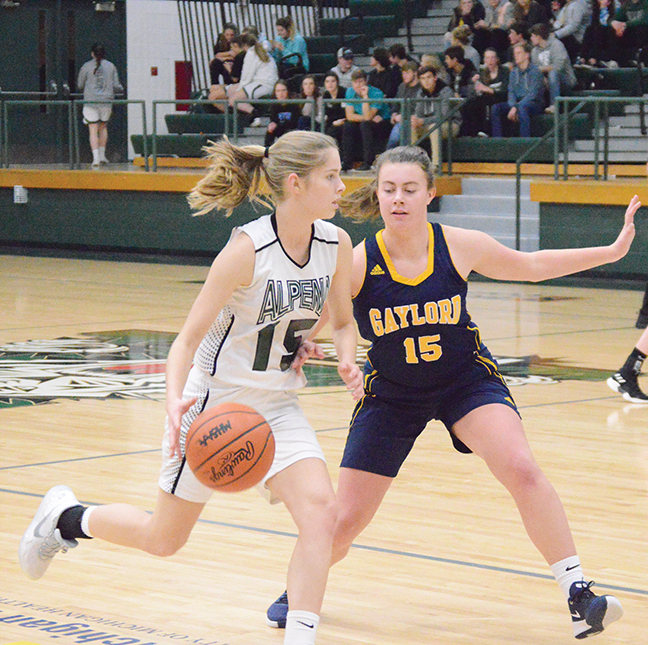 News Photo by James Andersen Alpena’s Allison Urlaub, left, drives past Gaylord’s Kennedy Neff during the first half of a Big North Conference girls basketball game on Thursday at Alpena High School. Urlaub scored 19 points off the bench to lead Alpena despite a 56-49 overtime loss to the Blue Devils.

The Wildcats battled from start to finish in their Big North Conference opener against Gaylord, but the Blue Devils stayed a few steps ahead of Alpena late and won 56-49 in overtime.

The previous six meetings between the two schools have been decided by 10 points or less, including a combined five points last season.

The latest meeting followed suit as the two sides tied four times in the second half with the largest lead in that span being five points.

“I was proud of the way we stepped up there at the end and came back and tied it after halftime,” Alpena coach Erin Andrews said. “We carried the momentum from the second quarter into the third and then we just lost momentum in the fourth quarter.”

Savanna Gapinski, Gaylord’s senior star, led the Blue Devils with 26 points including four three-pointers. Gapinski found holes in Alpena’s defense to score crucial buckets all night, but her most important offensive contributions came from the free throw line as she went 5-of-6 from the charity stripe in overtime.

Gapinski drove the lane and scored with 34 seconds left to tie the game at 44 and force overtime. Alpena had a shot to win in the waning seconds, but missed a layup in the lane.

The Blue Devils struck quickly in the extra period, scoring four points in the first 32 seconds. Rachel Klepadlo pushed Gaylord’s lead to five after a three-pointer with 2:44 left.

Alpena (2-1) cut the lead to two with a pair of free throws from Allie Urlaub with 1:34 remaining, but it proved too little too late as the Wildcats were forced to foul. Gaylord responded by going 4-of-7 from the line.

It was a disappointing ending for the Wildcats, who pushed hard but turned the ball over too many times down the stretch and were undone by streaky play.

“I think once we would score and get into our press a little bit we were ok, but when we were stuck in the half court, it’s harder for us to get into any kind of rhythm. I think we’re more comfortable when we run,” Andrews said. “We had too many turnovers in this game for sure; too many in the fourth quarter and in overtime.”

Urlaub led Alpena with 19 points and was a revelation for the Wildcats off the bench. Urlaub finished the game with four triples, including a pair that tied the game two different times in the third quarter. She scored during overtime as well, going 3-of-4 from the line.

“I’ll take that for sure. She did a great job tonight,” Andrews said. “She was on the bench and we sent her back in and we said “You’ve got to go back out and score and she said ‘Ok.'”

The Wildcats got off to a slow start to begin the second half, but heated up once they got going. Jenna Leeck scored a pair of baskets for the Wildcats to make it 28-27 and Urlaub later followed with her three-pointers, tying the game at 33 with 1:01 left.

Gaylord held a 37-36 lead after three quarters, but Alpena kept making plays to stay within striking distance. The Wildcats finally pounced and took the lead with 4:12 left when Jade Schultz scored on an inside feed. She followed with a put back to put Alpena up by three and scored a short time later to give Alpena the lead again.

Schultz finished with 10 points for Alpena, Jenna Leeck had eight points off the bench and Anna Young had seven.

Gapinski got hot early, scoring nine points in the first quarter including six of Gaylord’s first eight. The Wildcats struggled to control the ball early, but got a six-point swing midway through the period when Urlaub and DeRocher drained triples on back-to-back possessions to tie the game at 10.

Momentum swung back the other fast as a pair of three-pointers helped Gaylord take an 18-10 lead after eight minutes.

Alpena’s streaky play continued into the second quarter, but the Wildcats got hot again late in the period. Trailing by eight with 2:49 left, Alpena put together a 6-0 run to cut the lead to two at halftime.

In addition to a big night from Gapinski, Molly Kinser added 12 points and Kennedy Neff had eight.

Alpena plays on the road twice next week with games at Sault Ste. Marie on Tuesday and Traverse City West on Thursday.